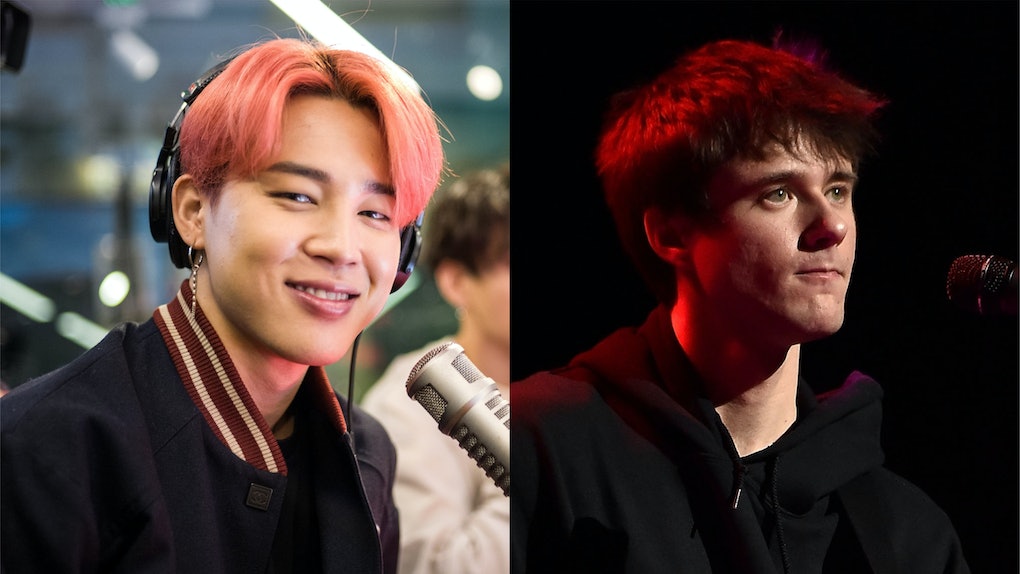 Will BTS' Jimin & Alec Benjamin Collaborate On A Song? Alec Opened Up About The Possibility

BTS is no stranger to surprise collaborations. Back in June, BTS released not one, but three collabs and they were all so different from each other. The collabs included artists like Charli XCX, Zara Larsson, and Juice WRLD. Then in July, RM dropped an "Old Town Road" remix with Lil Nas X called "Seoul Town Road" out of nowhere. Literally, no one saw it coming, and now fans are talking about another possible collab in the works in the BTS world and, this time, it might be between Jimin and Alec Benjamin. Will BTS' Jimin and Alec Benjamin collaborate on a song? Alec Benjamin talked about the possibility and spilled some serious deets.

Before I get to what he said, let me backtrack a bit, OK? As fans know, all the members of BTS have playlists on Spotify with their favorite songs they've been jamming out to. They update their playlists every few months or so, and in July, Benjamin noticed that Jimin had added five of his songs to his playlist, which meant that Jimin was obviously a big fan of Benjamin's. On July 4, Benjamin tweeted, "this is so cool :) I love you & @BTS_twt !" Aww, my heart! He also posted a screenshot of Jimin's playlist.

Alec Benjamin then reportedly reached out to Jimin and invited him to his concert in Seoul on Aug. 18, and guess what? Jimin did get a chance to go (probably because at that time, BTS was on vacation) and the two artists took a few photos together backstage. Jimin captioned his photo with, "Your voice is heavenly. Thanks for coming. @AlecBenjamin #JIMIN."

Meanwhile, Benjamin captioned his photo with, "Seoul was amazing ! thanks so much for coming to my show, Jimin . :) @BTS_twt."

Based on Jimin's glasses and casual clothes in the pics, it definitely seemed like he wanted to keep his appearance at Benjamin's concert low key at the time (again, probably because Jimin was on vacation!).

Now that it's been weeks since that happened, Alec Benjamin is revealing what really went down when he met Jimin.

In with o:what, Benjamin shared that he and Jimin have become friends since meeting in Seoul and they've been talking about collaborating together.

He said, "There's a two-month break between when I go home after my trip to China and when I go away to Europe again, when I'm going to be making my album and hopefully writing with other people. I have some plans to collaborate with Khalid and also Jimin from BTS."

Wait, what? Did I hear that right? Did Alec Benjamin just hint a collaboration with Jimin is coming? Apparently so! Benjamin did say that if he and Jimin do manage to collab together, it won't happen for a while. But the BTS ARMY is patient, so they'll be waiting for that collab if it is happening.

Jimin and Alec Benjamin on one song? The world isn't ready, y'all!

More like this
How Many Tattoos Does BTS' Jimin Have? His Collection Is Growing
By Michele Mendez
Simu Liu's Tweets About The 'Kim's Convenience' Finale Promise "Tea & Receipts"
By Dylan Kickham
Chrissy Teigen's Quotes About Giving Up Dieting Are So Refreshing
By Brandy Robidoux
Stay up to date