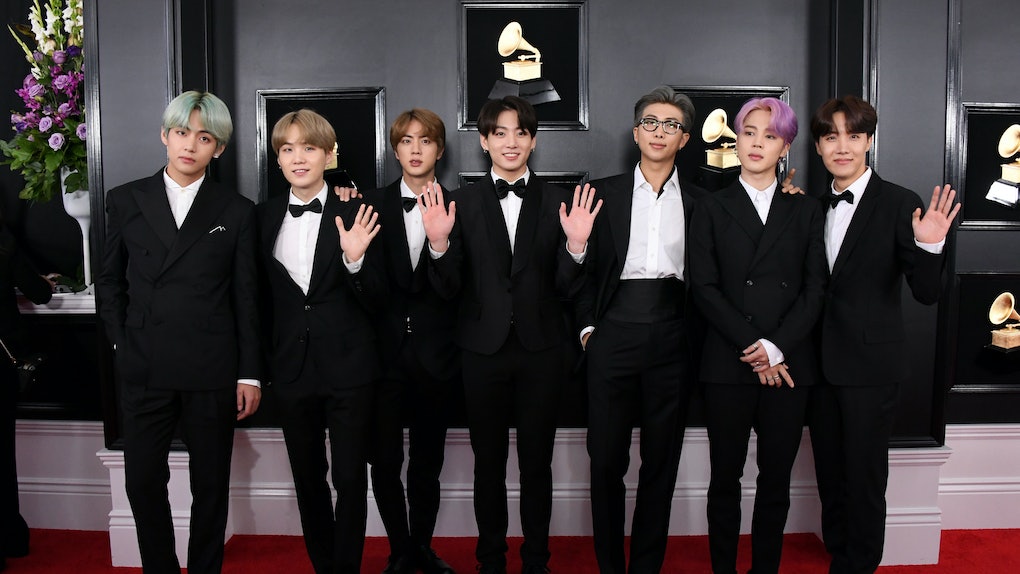 Will BTS Go To The 2020 Grammys? Here Are The Chances

Every year, the GRAMMYs bring the best and brightest in music together to celebrate the year's best music and artists. On top of the awards, artists grace the stage to perform epic renditions of their hit songs. One group fans definitely want to see on the guest list in 2020 is definitely BTS. The band has had an exceptional year of success, and fans agree RM, Jin, Suga, J-Hope, Jimin, V, and Jungkook definitely deserve an invite." But whether or not BTS will be at the 2020 Grammy Awards depends on a few factors.

After a year which saw BTS release two hit albums, complete a top-earning world tour, and induct millions of fans into the already-thriving BTS ARMY, it would only make sense for the seven boys to attend the Jan. 26, 2020, show. Not to mention, in 2019, J-Hope, Jin, V, Jungkook, Jimin, Suga, and RM, had the best time at the GRAMMYs, where they became the first-ever Korean artists to present an award at the show.

Loyal fans advocated for BTS to be nominated for their music at the 2020 Grammys as much as they could. The group was eligible for several categories: Album of the Year, Record of the Year, Song of the Year, Best Pop/Duo Group Performance, Best Pop Vocal Album, Best Music Video, and Best Compilation Soundtrack for Visual Media. If BTS secured a nomination, it would be as good as guaranteed the boys would attend the show (it's the music's biggest night, after all).

As it turns out, BTS did not receive any nominations, but that doesn't necessarily mean they won't be at the show.

BTS made such an impact at the 2019 Grammys, their red carpet outfits are being featured in a Grammys museum. Not to mention, there is still a chance RM, Jin, Suga, J-Hope, Jimin, V, and Jungkook could be asked to perform come Jan. 26, 2020. Khalid snagged a Record Of The Year nomination for "Talk," and fans are convinced he'll be collaborating with BTS on their next album, so a collab performance isn't an impossibility... Just sayin'.

Whether BTS should attend is the real question fans are asking. While fans would love to see the group recognized at music's biggest night in any capacity, ARMYs also don't want to see BTS' popularity exploited while the boys go home empty-handed.

Still, ARMYs recognize snagging a nomination was always going to be an uphill battle, and whether or not the Recording Academy's voting members recognize BTS' talent and impact or not, it's clear from BTS' inclusion at 2019's ceremony the Grammys' producers certainly do.

More like this
Kanye West's New Netflix Docuseries Sounds Epic, But Will It Feature Kim Kardashian?
By Brandy Robidoux
When Will BLACKPINK's Lisa Make Her Solo Debut? It May Be Right Around The Corner
By Michele Mendez
These Tweets About BTS' 'Bang Bang Con 2021' Sum Up The Epic Performance
By Cianna Garrison
Stay up to date