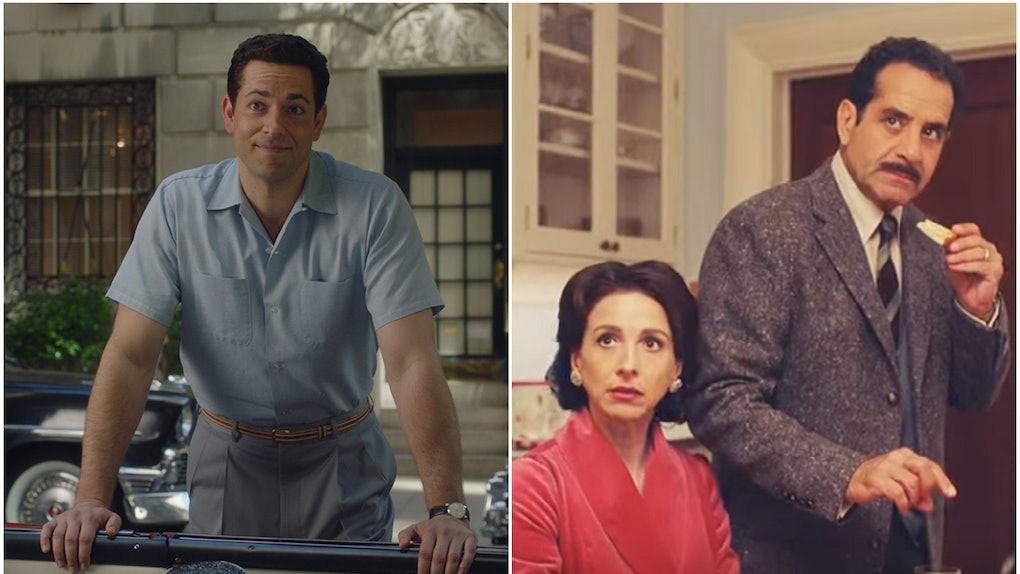 Will Benjamin Be In 'Marvelous Mrs. Maisel' Season 3? Midge's Parents Have Thoughts – EXCLUSIVE

On The Marvelous Mrs. Maisel, Midge and her comedic ambitions will always be what keeps me watching, but the show's Season 2 finale has fueled fans' questions about Midge's love life. After her father finally gave her doctor beau Benjamin permission to propose, Midge seemingly chose her booming career over love, but then approached her ex-husband Joel about having just one more night together. It looks like Midge has lingering feelings for Joel, so will Benjamin be in The Marvelous Mrs. Maisel Season 3? The character's future is unclear, but as Midge's parents, Tony Shalhoub and Marin Hinkle have some thoughts.

Speaking to Elite Daily at the Writers Guild Awards in New York, Emmy nominee Shalhoub and Hinkle believe that Abe and Rose Weissman will always prioritize Midge's (Rachel Brosnahan) needs over that of the men in her life. However, viewers have yet to see the aftermath of Midge's surprise hookup with Joel (Michael Zegen) and whether she actually broke up with Benjamin (Zachary Levi). While Shalhoub and Hinkle don't have an exact idea of how the upcoming third season tackles these stories, they seem to share a preference in who Midge should turn to for a relationship.

"I think we’re always Team Midge even though she really [costs] us a lot of sleep at night," Shalhoub tells Elite Daily. "Although I thought Benjamin would’ve been a really nice way to solve a lot of problems...Who knows, maybe he circles back."

"We do need a doctor as we get older," Hinkle jokes.

Soon after Season 2 dropped on Amazon Prime in December 2018, Levi revealed to The Hollywood Reporter that he was as clueless about Benjamin's fate as viewers were. "I don't know where that's going to lead," he said about Benjamin and Midge's relationship. "If there's an opportunity to come back and wrap that storyline up, I would love to. But a lot of stories can be told just in dialogue from other characters."

The Weissmans might not set aside a chair for Benjamin at their next Yom Kippur dinner, but like their characters, Hinkle and Shalhoub are intrigued about what they can expect on the Amazon comedy.

"[The show] is one of those scripts that you actually want to find out the other things that are happening beyond what is happening in your own character, and that isn’t always the case in other writing," Hinkle says. "I’m actually thrilled that [the writers] allowed Susie [Alex Borstein] into our world, because I’m really excited to see what happens when she enters."

She and Shalhoub also have their hopes for what Rose and Abe get up to in Season 3. Abe was last seen planning to resign from his teaching position at Columbia University, but Rose's reminder that the school owned their home appeared to put a pause on his decision. "I hope that Abe doesn’t take too long to reinvent himself and find his center again," Shalhoub says.

"I think it’d be kind of great if I have to help my husband out in some way," Hinkle explains. "You know, he’s supported us before, and perhaps maybe Rose will have to take a job at the Laundromat...maybe [a job] at the diner."

Season 3 of The Marvelous Mrs. Maisel is expected to premiere on Amazon Prime later this year.

More like this
In 'Riverdale' Season 5, Toni Topaz Is The Black Superwoman Without A Cape
By Erika Hardison
Who Did Emily Poison? 'The Handmaid's Tale' Season 2 Is Off To An Intense Start
By Ani Bundel
Hilary Duff's 'How I Met Your Father' Hulu Show Will Put A Spin On A Classic
By Dylan Kickham
Stay up to date