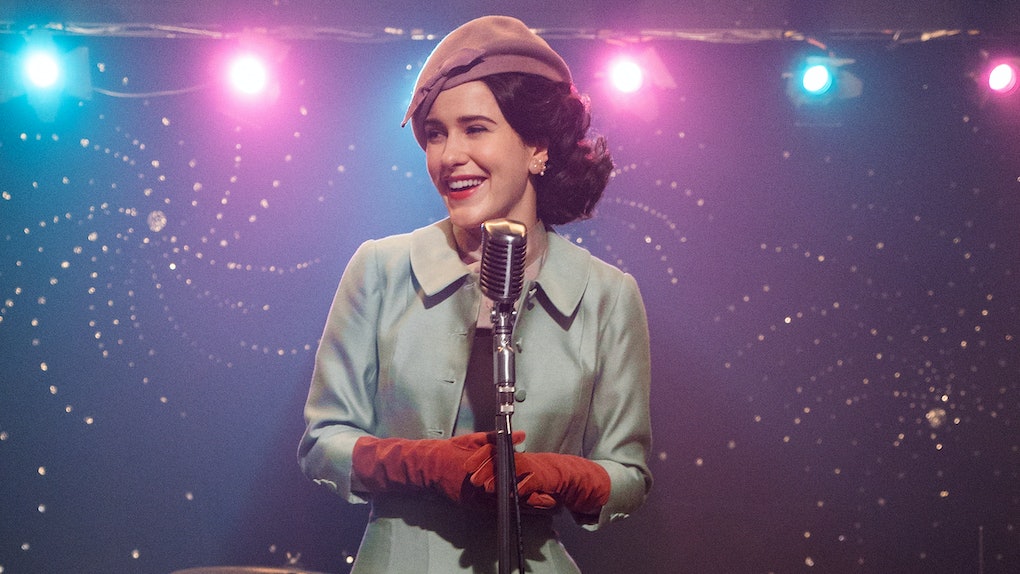 Will Midge Get Married In 'Marvelous Mrs. Maisel' Season 3? Let's Break Down The Facts

This post contains spoilers for Season 2 of The Marvelous Mrs. Maisel. After idyllic stints in Paris and the Catskills, The Marvelous Mrs. Maisel returned to its New York roots for the remainder of its second season. There, Midge's romance with eccentric doctor Benjamin flourished, while Joel buried himself in work and flirted with any woman who looked his way. The separated couple seemed to be taking very different paths, but the season finale threw fans for a loop. Will Midge get married in The Marvelous Mrs. Maisel Season 3? Despite hinting at a future wedding, the finale proves that her love life will be even more complex next season.

In Season 2, Midge (Rachel Brosnahan) seemed to meet her match in the unconventional Benjamin (Zachary Levi), who gamely accepted her stand-up comedy and admired her fearlessness. Meanwhile, Joel (Michael Zegen) was clearly not over Midge, anxiously wondering about her new relationship when he wasn't drunkenly stumbling around his factory-turned-apartment. Joel was on his way to being old news in Midge's life when she admitted to feeling open about marriage to Benjamin. But upon Abe's (Tony Shalhoub) approval of Benjamin and the prospect of a European tour, Midge panicked, running back into Joel's arms seemingly for a one night stand.

So, now that we presumably have a whole year before receiving answers, we've narrowed down some of our biggest concerns about Midge's love life next season.

1. Will Midge Actually Break Up With Benjamin?

After learning that Abe approved of Benjamin's desire to propose, Midge didn't share the news with her beau. Instead, she approached Joel, making audiences wonder if she had dumped Benjamin off-camera. Her decision to find Joel likely stems from dramatic purposes, and even though Midge is seemingly choosing her career over men, the fact that she wanted a special moment with her ex doesn't bode well for Benjamin.

According to The Hollywood Reporter, Levi doesn't know if he'll be back for Season 3 yet, but his character disappearing after so many episodes wouldn't be new territory for series creator Amy Sherman-Palladino. Remember how quickly Lorelai's fiancé Max vanished from Gilmore Girls?

2. Will Joel & Midge's "One Night Only" Deal Get Complicated?

These two kids just can't stay away from each other. Midge and Joel will always be in each other's lives because they have kids together (even though they definitely forget this sometimes), but Midge asking for one night with someone she loves sounds like a disaster in the making. The pair's finale kiss likely marks the second time since their split that they'll end up in bed together, but it's hard to believe that they'll manage to be platonic.

3. Will Midge & Joel's Divorce Ever Be Official?

Throughout the season, Midge kept reminding people that she was technically still Mrs. Maisel. Despite declaring that she and Joel were over, neither of them seemed inclined to actually start divorce proceedings. While that didn't bother Benjamin when he and Midge began dating, the little detail would certainly alleviate any awkwardness Joel and Midge may experience if they get back together. Why file for divorce if you're clearly still having second thoughts about the choice?

4. Can Joel Stop His Wandering Eye?

Joel's affair with his secretary Penny Pan was what broke Midge's trust in Season 1, and he didn't exactly prove that his philandering days were behind him in Season 2. He flirted with women in the Catskills and had frequent outings with the models at the Maisels' factory back in the city. However, just as Benajmin liked "weird" women, Joel definitely has a thing for them too. Pretty faces distracted him, but Midge's personality seemed to prevent him from moving past her. If the couple decide to try out a relationship again, can Joel fully commit?

5. Is Lenny Bruce Still A Romantic Prospect For Midge?

ICYMI, the character Lenny Bruce is based on the real-life comic with the same name, and although his wife Honey briefly appeared at the beginning of Season 1, the show has veered away from depicting his romantic life. The first season ignited some fans' speculation about Midge entering a love triangle with Lenny and Joel, but thanks to his fleeting presence in Season 2 and the introduction of Benjamin, Lenny became less of a Lothario toward Midge. In Gilmore Girls terms, if Joel is Midge's Christopher and Benjamin is her Max, is Lenny like her Luke Danes?

Season 3 of The Marvelous Mrs. Maisel is expected to premiere in 2019 on Amazon Prime.

More like this
When Will 'Riverdale' Season 5 Return In 2021? Its Mid-Season Break Is Long AF
By Rachel Varina
These Clues 'Grey's Anatomy' Is Ending With Season 17 Will Break Your Heart
By Abby Monteil
Who Is Steven In 'The Handmaid's Tale'? He's Definitely Not Mayday
By Ani Bundel
Stay up to date