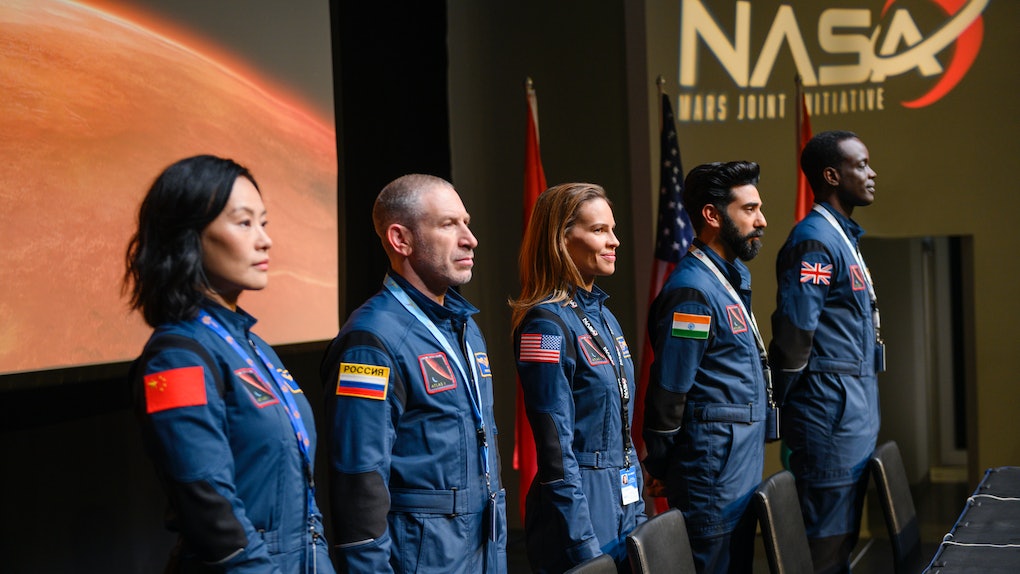 Will ‘Away’ Get A Season 2 On Netflix? Season 1’s Ending Begs For It

You don't have to be a rocket scientist see the astronauts on Netflix's new interstellar series are facing a lot of unknowns. While Away follows the crew of the fictitious Altas ship on its maiden voyage to Mars, fans have a bigger question here on Earth: Will Away get a Season 2 on Netflix? The Season 1 ending left a lot of storylines up in the air.

The galactic series follows Emma Green (Hilary Swank), an American astronaut chosen to be the commander for the first manned mission to Mars. After years of rigorous training, she's leading a team of four other international astronauts on the three-year, 45.697-million mile voyage via their ship dubbed the "Atlas." What makes things especially complicated is that while the crew faces plenty of obstacles mid-flight, they're also grappling with being away from their lives back home.

Spoiler alert: Don't read on if you have not already watched all of Away Season 1. From love triangles to faulty equipment, family drama to space travel concerns, there's are a lot of situations viewers are itching to see play out in a second season. Season 1 ended with the crew finally reaching Mars after a not-so-smooth journey. There was the fire, an illness that resulted in a very 2020-esque quarantine, and non-stop power plays — and that's just from the crew aboard the Altas.

Additionally there's the fact both Emma and her husband, Matt (Josh Charles) have tiny sparks of extramarital relationships budding on the horizon — something that's quickly making dynamics very complicated. Emma's second-in-command Ram (Ray Panthaki) mentioned his feelings to her in a life-or-death moment, while back on Earth, Matt is getting closer to Melissa (Monique Gabriela Curnen), a family friend and NASA employee who's helping raise the couple's teenage daughter, Alexis (Talitha Eliana Bateman) back on Earth.

Then, there's the fact that the team just landed on Mars, which means they have an entire laundry list of tasks to compete on the planet before making the very dangerous trip back. Seeing how the trip there went, I have a feeling it won't be smooth sailing back to Earth. Plus, the team's chemist, Lu (Vivian Wu), actively disobeyed her country's command by sending a group photo instead of a solo shot (with her visor down) as the first historic picture from Mars, so there's bound to be some consequences there as well.

Basically, there's so much more to the story now that Atlas arrived on Mars. Since the series was just released on Sept. 4, however, it will probably be at least a month or so before Netflix announces whether a Season 2 is on the horizon. The streamer usually waits to collect data and determine how many people were into the show before deciding on a renewal. With so much riding on this mission, fingers crossed fans get to see what happens now that the crew as finally reached the Red Planet.

Away is streaming now on Netflix.