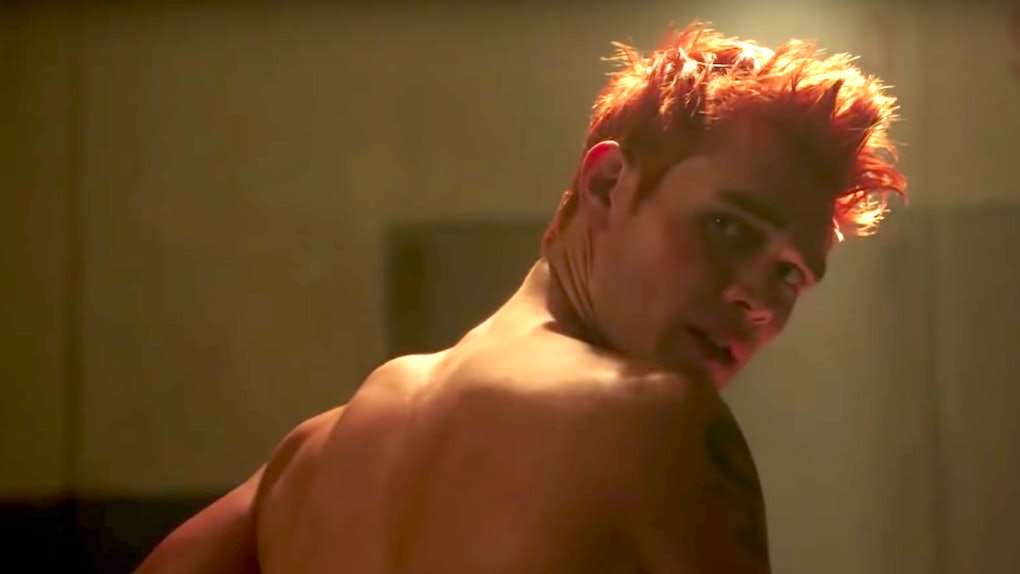 Will Archie & Joaquin Hook Up On 'Riverdale'? A New Trailer Teases A New Romance

Things are going from bad to worse on the spooky third season of Riverdale, but there may actually be an unexpected new love story in the works. The extended promo trailer for this week's new episode includes a quick scene that has every fan buzzing, and asking a totally surprising question: Will Archie and Joaquin hook up on Riverdale? Yeah, nobody saw that pairing coming, but the new teaser reveals that the two prisoners will kiss in Wednesday night's episode.

As the episode title suggests, this Wednesday's new Riverdale episode "The Great Escape" will center on an attempt to break Archie Andrews out of jail. And it looks like Archie may have some company for his jailbreak. The promotional teaser for Episode 5 shows Archie getting much closer to fellow inmate Joaquin DeSantos... even locking lips with him.

As viewers know, Joaquin is either gay or bi, having previously dated Archie's friend Kevin Keller, but Archie has presented as heterosexual for the run of the series. We've seen Archie hook up with several female characters, such as Ms. Grundy, Valerie Brown, Betty Cooper, and Veronica Lodge, but never a male character. The kiss has fans wondering whether Archie may explore his sexuality more in upcoming episodes. Check out the teaser causing all of the commotion below:

Of course, since we only see Joaquin and Archie kiss for a brief second, it is hard to know what may actually be going on in the scene. Archie's face is not shown, and Joaquin is leans in to plant the kiss on Archie, so there is the chance that it could be one-sided. Another possibility is that the kiss is somehow part of Archie and Joaquin's jailbreak plan, and the two are simply pretending to be in a relationship to help their plan along in some way. So, basically, we will have to wait to see whether this kiss is the real deal or just a ruse on Wednesday night's new episode.

Riverdale is no stranger to featuring same-sex relationships. Kevin Keller has been an out gay character since the series began, and he has dated Joaquin in the past and currently Moose. Last season, Cheryl Blossom confessed her attraction to women and began dating Toni Topaz. A few months before Season 3 of Riverdale began, KJ Apa said that he would love for Archie to be part of a gay romance storyline.

But Archie's big kiss is not the only thing in that new trailer exciting fans for the new Riverdale episode. The clip also delves deeper into Jughead's obsession with Gryphons and Gargoyles, the dangerous game that has led to a number of mysterious deaths in town. As Jughead plunges deeper and deeper into the game, it is up to Betty (sporting her own Southside Serpents jacket for the first time) to try to snap her boyfriend out of it.

More like this
This 'The Handmaid's Tale' Season 4, Episode 6 Promo Teases A Huge Turning Point
By Ani Bundel
When Will 'Riverdale' Season 5 Return In 2021? Its Mid-Season Break Is Long AF
By Rachel Varina
Juliette Porter Teases 'Siesta Key' Season 4 Drama — EXCLUSIVE
By Rachel Varina
Stay up to date