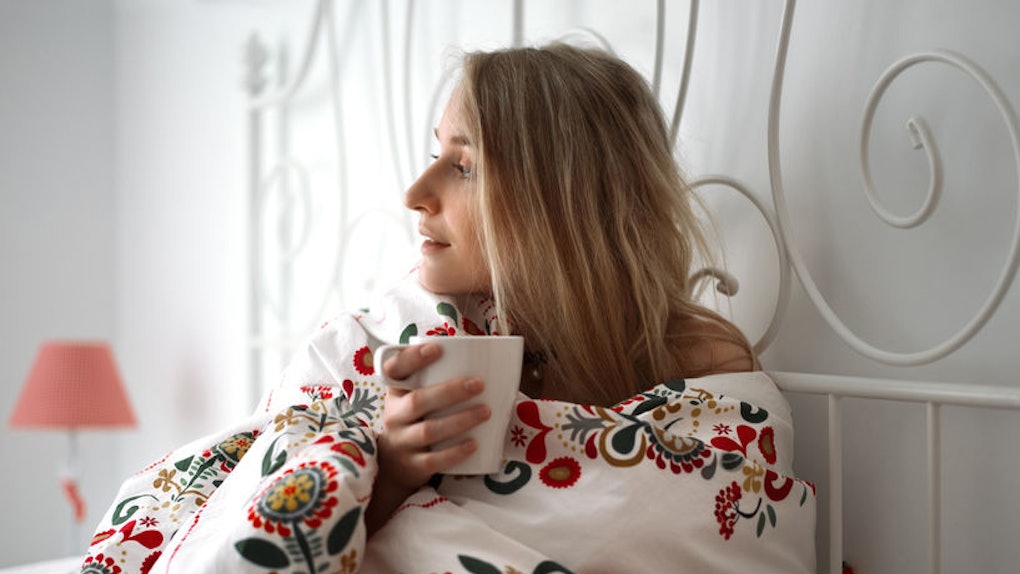 Why You Feel Sick On Your Period Has A Lot To Do With Your Immune System, Science Says

Menstrual cycles are crafty in the way they take over the body. From debilitating cramps that make it almost impossible for you to get from the couch to the bathroom, to a fluctuating appetite that flips between bouts of monstrous cravings and feelings of nausea, it's as if your period runs the show for your body one week out of every month. All of these things have probably left you wondering why, exactly, you feel so sick during your period. Well, I hate to break it to you, but according to new research, it’s because the powers of your hormones go well beyond the bedroom, well past fertility happenings, and can ultimately disrupt your entire immune system. Basically, according to a paper published by Oxford University in collaboration with period-tracking app Clue, your immune system is pretty significantly impacted by the four phases of your cycle, and the second phase in particular has the potential to be quite a doozy. So mark the dates on your calendar, babe, because it’s bound to be a jolly good time.

So here’s the thing: Your immune system works hard to protect your entire body from diseases, environmental stressors — anything and everything that could potentially cause it harm and make you sick. At the same time, though, your body's hormones are working at their own pace to ensure your menstrual cycle runs smoothly. This is where conflict between the two can sometimes happen: The findings from Oxford University and Clue, which have been published in the scientific journal Trends in Ecology & Evolution, shed light on the fact that, sometimes, the four phases of the menstrual cycle (follicular, ovulation, luteal, and menstruation) and your immune system clash. Having said that, it's important for medical professionals to acknowledge how a woman's menstrual cycle affects her body's immunity, specifically during the luteal phase — aka the time between the end of ovulation and when you start bleeding.

But it's not just the luteal phase that can cause a few issues here. According to Clue, during the follicular phase (aka when follicles in the ovaries mature and cue the lining of the uterus to begin to thicken), your body tends to produce more antibodies that can better fight off disease and illness — which sounds like a good thing, right? Well, here's why it's not: Clue explains that that increase in antibodies has been linked to the body’s spike in estrogen, and as the app’s research suggests, too much estrogen can also "lead to a worsening of chronic disease." However, this heavily depends on how your individual body responds to the excess estrogen.

Circling back to the luteal phase's role in all of this, though, Clue explains that during this phase of your cycle, estrogen dips, progesterone hormone production rises, and as a result, "the immune system is suppressed and much less likely to stage an inflammatory response." In other words, while the phases of your menstrual cycle are simply doing what they're supposed to do, your immune system takes a hit and temporarily loses its ability to fight off illness properly, making it easier for you to catch germs and for said germs to spread and leave you feeling sick.

Now that I've explained the complicated stuff, I’d just like to take a moment to genuinely apologize for always being the bearer of bad news when it comes to all things period-related. However, hormones are some complicated components to your anatomy, and it’s not my fault they tend to get a little unruly.

Thankfully, I do have some good news for you: Regardless of what phase of the menstrual cycle you're in, you still have the ability to take control of your health and steer it in the right direction. The best part is, it doesn’t take much effort on your end; it’s really just a matter of using your best judgment when making decisions that directly affect your lifestyle and well-being.

“If you break out during ovulation or have painful ovulation, which is caused by hormonal imbalance, or if you have significant PMS (also a hormonal imbalance), then you will experience greater increase and drop-off of estrogen, which will trigger a bigger immunity shift,” Alisa Vitti, creator of Cycle Syncing™, founder of Flo Living, and creator of the app MyFLO, tells Elite Daily in an email. In other words, the more you consciously make the effort to keep your hormones balanced, the less likely it'll be that you'll come down sick during your period. So, if you want to go the extra step to take care of your health and keep your hormones in check during your cycle, Vitti encourages you to take your vitamins, exercise regularly, and eat foods that nourish your body depending on what it needs to thrive during each phase of your menstrual cycle. This is what she refers to as “biohacking,” and it’s really just as simple as making the best choices for your body.

Of course, at the end of the day, you know your body better than anyone, and you are the only person who can make lifestyle decisions based on what your individual body and cycle need to thrive in the healthiest way possible. So, eat your fruits and vegetables, wash your hands after going to the bathroom and before every meal, and take advantage of every opportunity to get your blood flowing and your heart pumping. Both your immune system and menstrual cycle were built to work and heal on their own, but they can only do so much. Do yourself, and your body a favor, and meet these systems halfway.

More like this
15 'Schitt's Creek'-Inspired Mother's Day Cards On Etsy For The Moira In Your Life
By Rachel Chapman
The Netflix Reality Show You Should Watch, Based On Your Zodiac Sign
By Chelsea Jackson
23 Instagram Captions For Sunflowers That'll Instantly Brighten Up Your Day
By Jasmine Vaughn-Hall
Stay up to date