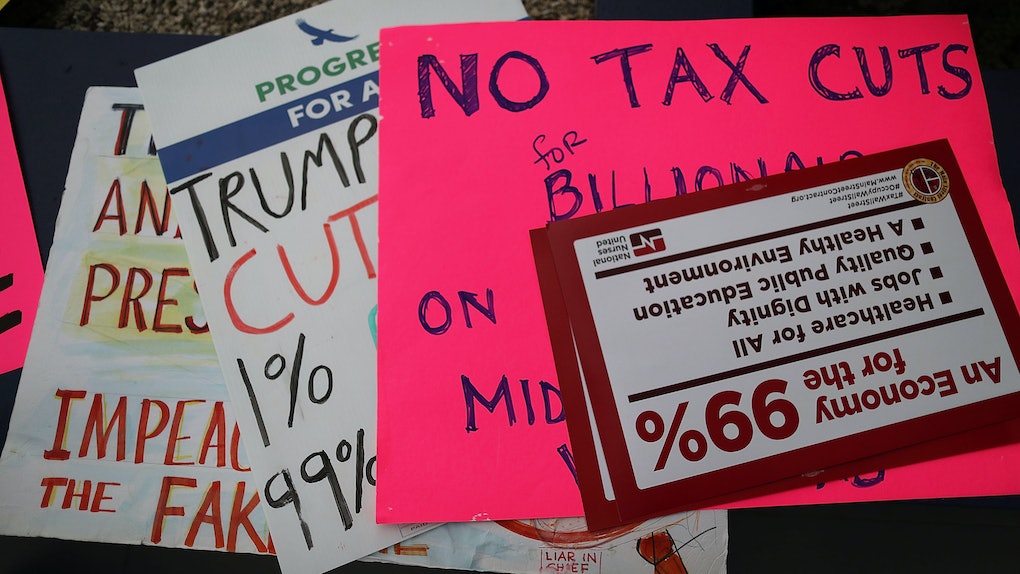 Why Would There Be A Government Shutdown? Congress Has A Tight Deadline

There's nothing like the beginning of December to get people in the mood for the holiday season, and apparently a possible government shutdown. The Republican tax reform bill has been dominating the news for a long time, but there's another bill that could cause problems. Congress needs to agree on a spending bill to prevent a government shutdown. The spending bill has been revised and revisited many times over the past few months, and now the GOP-controlled Congress has until Dec. 8 to create a temporary funding plan before funding expires and the government will temporarily shutdown. A common question right about now would be, why would there be a government shutdown?

How did we get to this point? Here's some background to help explain.

A government shutdown occurs when Republicans and Democrats cannot agree on a government spending plan, which has clearly been a problem this entire year. Congress still has not agreed on funding for the current fiscal year, which began Oct. 1. Instead, they passed a temporary spending bill in September, but that bill is set to expire on Dec. 8, which is why we have this deadline now. In order to prevent the shutdown, the Senate needs to get 60 votes to pass on a temporary plan, which means Republicans need 8 Democrats to vote.

So why can't they agree? Because Democrats and Republicans want money to be allocated differently and are having a hard time compromising. Democrats are pushing to protect the Deferred Action for Childhood Arrivals (DACA) program, which Trump originally said would be dismantled. Without guaranteed protection for DACA "Dreamers" in the spending bill, Democrats have promised to withhold their vote. Democrats also do not want increased military spending, which is something that Republicans originally proposed in their early versions of the spending bill. In February, Trump proposed to increase military spending by $54 million, and cut spending on nonmilitary programs relating to science, environment, education, and the arts.

Trump has continued to add fuel to the fire by suggesting that a government shutdown would signify a political win that would be good for him, according to a report by the Washington Post. At a rally in August, Trump also threatened a government shutdown saying, "even if we have to close down our government, we're building that wall," referring to the Mexico border wall that he still wants funding for. Democrats are in opposition for funding the wall, adding another reason why a compromise is hard to achieve.

What would happen if the government shuts down?

Aside from giving the GOP a worse reputation for not getting things under control, it would greatly affect the American public. If the government did shutdown, a number of government-run agencies would likely close down too. That includes national parks and zoos, passport and loan services, and a number of government workers would be temporarily out of a job. Things like the U.S. Postal Service, the military, and air traffic controllers would still run.

Each government shutdown, which has happened 18 times since the creation of the process in 1976, is different. The last time it happened was for 16 days in October 2013, where approximately 800,000 federal employees were forced into unpaid furlough for two weeks. Further more, millions of Veterans were at risk for financial benefits and assistance during those 16 days.

Senate Majority Leader Mitch McConnell assured people on Sunday, saying that a shutdown is "just not going to happen." I'm not so sure about that McConnell.

It's up to the GOP to orchestrate compromise, and it's up to all of our leaders, regardless of their party affiliations, to do their jobs not with hot-headed haste, but with a sense of diligent urgency. Four days, people!