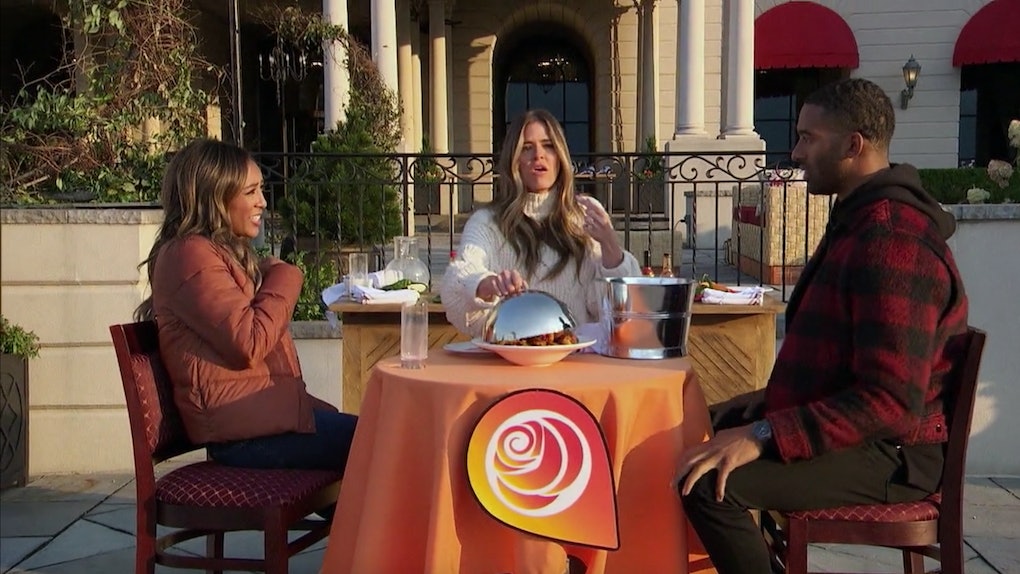 Why Were Tayshia & JoJo Cut From Matt's 'Bachelor' Season? Twitter Is Pissed

When you're filming a show as big as The Bachelor, some things are naturally going to get cut from the final episodes. That seemed to be especially the case for Matt James' season. During the "Women Tell All" special on Monday, March 1, a blooper reel revealed that entire group date segments and Bachelor Nation cameos were filmed but did not air during the season. One cut particularly bothered fans, leaving many viewers to wonder: Why were Tayshia Adams and JoJo Fletcher cut from Matt's Bachelor season?

The blooper reel featured never-before-seen content of the two former Bachelorettes sitting down with Matt for a chat. In one scene, they enjoyed drinks on a patio before being interrupted by a dragonfly. In another, the three sat at a table with wings and hot sauce, before JoJo and Matt were taken aback by the spiciness of their meal. They were all charming moments, but plenty of fans were understandably irritated that Tayshia and JoJo's scenes were likely cut from Season 25 in favor of showcasing petty drama among the contestants. It wasn't even clear exactly what the two of them were doing at Nemacolin in the first place (did they host a group date or just hang out with Matt?), leaving viewers to imagine what could've been.

Even though Tayshia and JoJo's time on Matt's Bachelor season was cut out, JoJo did share some hints about what exactly went down during their time at Nemacolin.

"Tayshia and I actually came down, did the whole quarantine, had a date with Matt,” she told Us Weekly in a Feb. 12 interview. “You film so much stuff for this show and inevitably certain things have to get cut just based on how the show plays out. So, Tayshia and I got the call and they’re like, ‘Hey, we’re so sorry, but with editing and everything that’s going on we’re gonna have to scratch that date, it just doesn’t make sense.’ It’s totally fine, we had so much fun doing it."

Season 25 of The Bachelor continues Mondays at 8 p.m. ET on ABC.