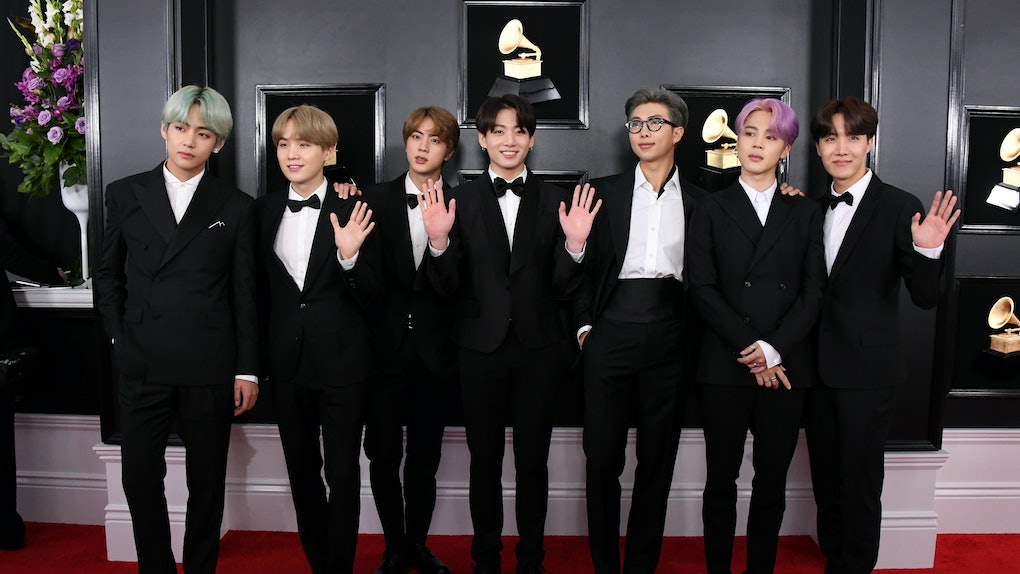 Why Wasn't BTS At The 2019 iHeartRadio Music Awards? They're Focusing On Something Major

Music fans were tuned into the iHeartRadio Music Awards on March 14, waiting for their faves to walk the stage and accept their awards. Most of the heavy-industry hitters were there, except one group was notably missing from the crowd. Beloved K-pop group BTS was nowhere to be found. Obviously, ARMYs are feverishly googling, "Why wasn't BTS at the 2019 iHeartRadio Music Awards?" Well, the answer is simple. They're busy making music in Korea, babes. Forgive them.

It's easy to assume that BTS is anywhere that music stuff is happening. Tours, albums, commercials, awards ceremonies, talk shows, social media, and of course, the music charts could all be considered home turf for the iconic group. Members Jimin, Jungkook, Jin, RM, V, Suga, and J-Hope are quickly going down in international history for their amazing talent, stellar choreography, and of course, memorable songs. Their stage presence is second to none, and their general likability is seemingly endless. For these reasons, they make great additions to any awards show, and fans were hoping they would fill out the iHeart Radio Music Awards, too.

However, if you take a quick scroll their their Twitter feeds, you'll see they're currently busy together in Korea and seem to be preparing for a comeback. New music is coming on April 12, and ARMYs are getting ready in a big way. While it hardly feels like they've been on break to me, there's no taming ARMYs' thirst for more music from their favorite K-pop idols all of the time.

Based on some recent tweets from the group, fans have deduced they're busy rehearsing and hanging out far from the iHeartRadio arena in Los Angeles. On March 9, the gang appeared to be in a rehearsal space when they posted a video wishing Suga a happy birthday.

On March 11, RM and Jimin shared these pictures:

Honestly, it's probably for the better. ARMYs are upset that their boys weren't up for more nominations. They did take home Best Fan Army, because obviously, but loads of fans feel they should have been considered for heavier-hitting categories. To be fair, they beat out some pretty intense fan bases out there including 5SOSFam, Arianators, Beliebers, BardiGang, MendesArmy, Camilizers, Stylers, Jaguars, Limelights, Zquad, and Swifties.

One other thing BTS might be preparing for, in addition to their comeback, is nurturing and fostering their little brother group, TXT aka Tomorrow X Together. BTS and TXT both share the agency Big Hit Entertainment, and the varsity idols have gone out of their way to ask their fanbase to support the newcomers, too. I'm personally stressed out thinking about a day when TXT's fandom is up against ARMY, but I'll let the guys sort it out amongst themselves.

Fortunately, iHeartRadio viewers were treated to this fun BTS video while their category win was announced:

RM heroically congratulated the entire BTS ARMY on their win (yay ARMY! We're all in this together!) and I was reminded that I don't need to see the boys live to get goosebumps.