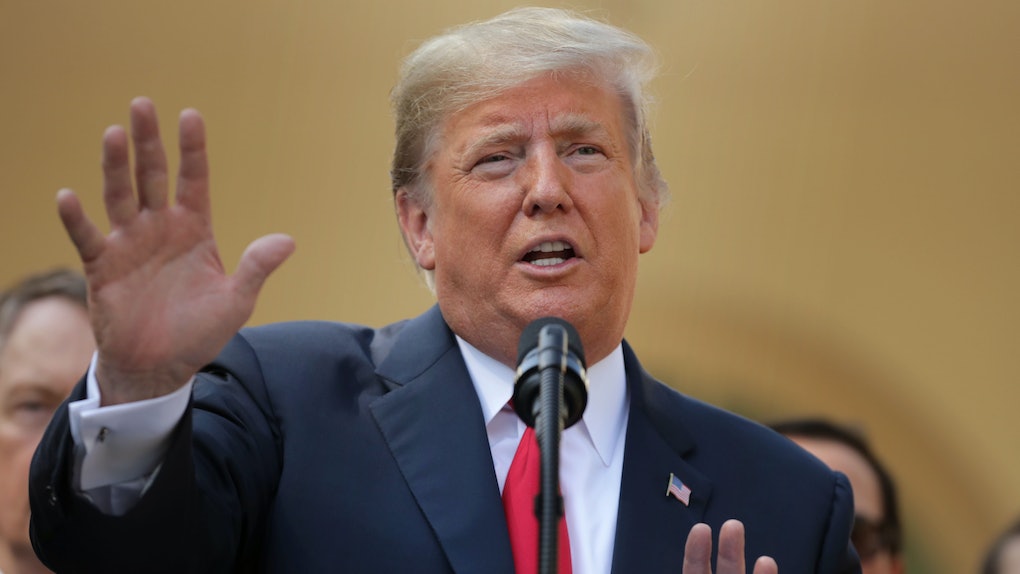 Why Was A Presidential Alert Sent To My Phone? It’s Actually For A Good Reason

If you happened to look down at your phone on Wednesday, Oct. 3 looking for a text from bae but instead finding one from President Donald Trump, then you might be wondering, "why was a presidential alert sent to my phone?" You might not want it, but the alert is actually supposed to help you out in the long run, if that makes you feel any better.

Users across the country might have been shocked when an alert popped up on their phones saying "Presidential Alert," followed by a short message that read, "THIS IS A TEST of the National Wireless Emergency Alert System. No action needed." No one asked for it or opted in, but everyone got it anyway. But, why, you ask? According to a Sept. 13 press release sent out by FEMA, the system allows any sitting president to use the Wireless Emergency Alert (WEA) system to send out a text message, or "presidential alert" as they're calling it, to the entire country in the event of a things like "dangerous weather, missing children, and other critical situations." The press release read,

The WEA system is used to warn the public about dangerous weather, missing children, and other critical situations through alerts on cell phones. The national test will use the same special tone and vibration as with all WEA messages (i.e. Tornado Warning, AMBER Alert). Users cannot opt out of receiving the WEA test.

On Oct. 3, FEMA decided to take the alert system for a test drive, and if you're still creeped out about getting texts from the president, I'm sorry, but there's no way out. The New York Times reports that although users may opt out of local warnings, no one can opt out of presidential alerts. Sorry.

Wired, however, pointed out a clever little workaround. If you don't want to receive any presidential alerts on your phone, then you can just put it in airplane mode. However, this really only works if you already know a message is coming through. It's not really helpful in the cases of things like natural disasters (which you might not know about ahead of time). In the end, you are just going to have to deal with the occasional text from Trump.

Occasional is a funny word though, because some people feel that Trump might use it a little more often than just for weather warnings and the like. Before the alert went out on Wednesday, Twitter busted out some theories on how Trump might make use of the presidential alert system.

Not to worry, though. Under the Integrated Public Alert and Warning System Modernization Act of 2015, Trump can't use the WEA for anything other than its intended purposes. The law states that it can't be "used to transmit a message that does not relate to a natural disaster, act of terrorism, or other man-made disaster or threat to public safety." So, that's reassuring, right?

While some people might have been a little creeped out by the presidential alert popping up on their phone, at least it's meant to help you in times of trouble. So let's just focus on that.

More like this
These TikTok "Pass The Phone" Challenge Ideas Will Hilariously Roast Your BFFs
By Daffany Chan
Can You Blur Your Zoom Background On Your Phone? Here's The Deal With This Clutch Feature
By Lara Walsh
These Tweets & Memes About The Purple iPhone 12 Are Seriously Hype Over The Hue
By Lara Walsh
Stay up to date