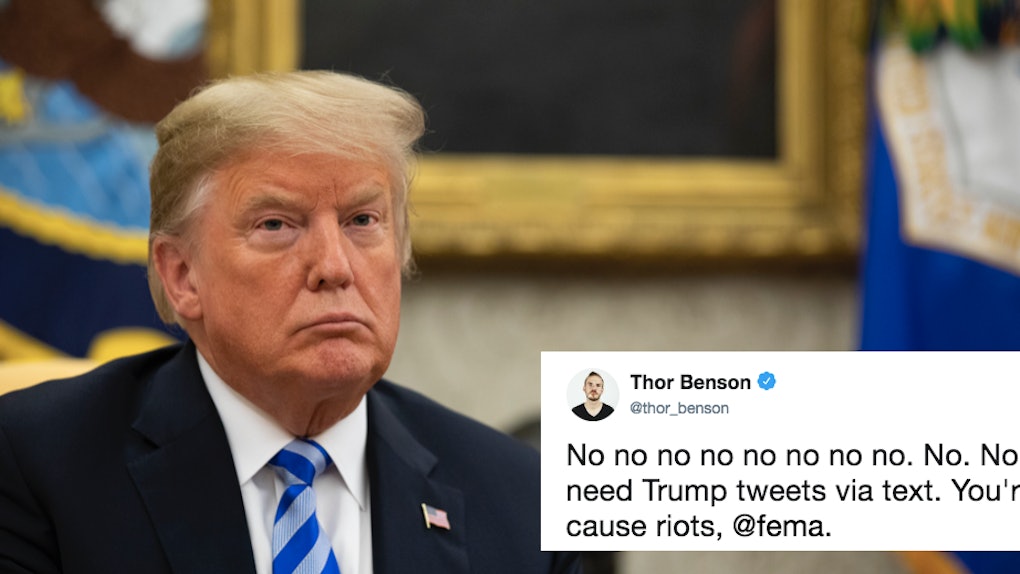 Prepare yourself (and your phone) for a message from President Donald Trump — and no, you can't opt out of it. If it's any solace, the text is a part of a new feature that the Federal Emergency Management Agency (FEMA) is testing out next week, so you hopefully won't be receiving any fiery messages or threats from the president like the ones that are loaded on his Twitter page. Still, there are some people who still aren't exactly thrilled by the news, and these tweets about FEMA's "Presidential Alert" seem to show why.

If you haven't heard, the presidential alert is supposed to allow any U.S. president to communicate with nearly everyone in the nation who has a cell phone in the event of a national disaster, per FEMA's Sept. 13 press release about the alert. FEMA will conduct its first test of the feature on Thursday, Sept. 20, which is supposed to send a text message — or presidential alert — to the majority of cell phones through the Wireless Emergency Alert (WEA) system. Elite Daily reached out to FEMA for further comment regarding the logistics of whether or not President Trump will actually draft the WEA message with this new presidential alert but did not hear back at the time of publication. Nonetheless, people are seriously not anticipating the presidential alert and airing out their feelings online.

There are already ideas of what the text will say.

One user guessed the alert will say, "“Fake News won’t tell the Truth that my Texts are the Best Texts not like Obama who had no Texts at All. SAD!”

It's sad that I can totally see this.

Another Twitter user guessed it would the classic, "You up text?"

"Half the country smashed their iPhones that day..."

"If I get a text from FEMA, I'm blocking the number," another Twitter user declared.

I repeat: you guys cannot opt out of this alert, as its permitted under the 2006 Warning, Alert and Response Network (WARN) Act passed by Congress, according to The Hill. So you might as well learn a bit about what to expect, eh?

The alert will reportedly use the same tone and vibration as alerts like tornado warnings or Amber Alerts. At 2:18 p.m. ET on Sept. 20, citizens should expect their phones to buzz with a text that reads, “Presidential Alert" and “THIS IS A TEST of the National Wireless Emergency Alert System. No action is needed.” Minutes later, the EAS will share a similar test message over television, radio, and wireline video services.

Seeing as though there have been eight reported deaths in connection with Hurricane Florence as of Saturday, Sept. 15, per NPR, it makes sense that a streamlined alert system would reach you on your phone.

If you're worried about getting bombarded with messages from President Trump, experts also assured that Trump won't overuse the system in a chat with NBC News on Friday, Sept. 14. Karen North, director of the Annenberg Digital Social Media program at the University of Southern California, explained, "If you separate this from the politics and personality of any individual president then this is a great idea and an amazing use of technology to reach everybody if they’re in harms way."

Eh, I guess so. But seriously: don't get too carried away.