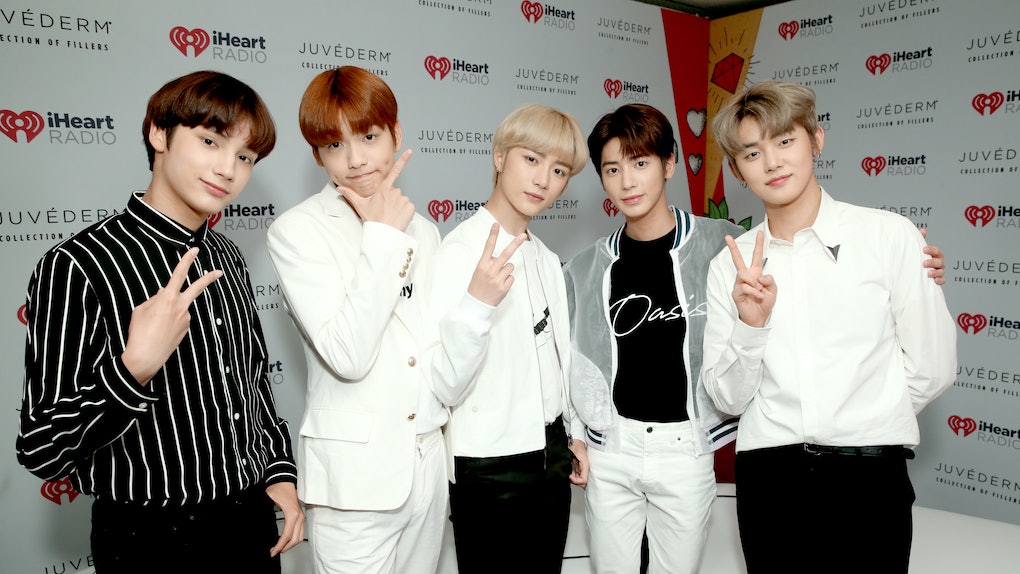 Why Isn't TXT At The 2019 VMAs? Here’s Why They Skipped Despite Their First U.S. Nomination

Well, this is annoying. I know many K-pop fans are probably wondering why TXT isn't at the 2019 VMAs. And I feel your pain. It seems like the youngest and hottest boy band to emerge out of K-pop giant Big Hit Entertainment should be dancing their way down that red carpet no matter what, especially considering their nomination in the Best K-Pop category. Alas, it seems like their attendance at the show was never meant to be due to their performance schedule, intense planning for their comeback album now scheduled for October 2019, plus the complication of a lingering infection that spread around the group back in early August. Le sigh.

TXT or Tomorrow X Together includes five fresh members: Yeonjun, Soobin, Hueningkai, Taehyun, and Beomgyu. When they first hit the scene, Big Hit described the gang as "a bright and youthful boy band where each member is different from one another, shining in their own way to create a synergy." The launch statement also said, "Just as how their name suggests, the different members have all come together under one dream in hopes of building a new tomorrow."

Unfortunately, it looks like more than their shared demeanor is bringing them together. In early August, an official statement went out explaining the majority of the group was sick with infectious conjunctivitis. That sh*t is highly contagious, and it would make sense that the boys were spreading the illness to one another working and living in such close quarters. Due to this, Big Hit explained the release date of their next album is being rescheduled from September to October.

"We would like to inform you that the release date for TOMORROWXTOGETHER's next album will be re-scheduled from late September to late October, due to members TAEHYUN and HUENINGKAI having recently contracted infectious conjunctivitis," the statement began, continuing:

After SOOBIN was diagnosed with the same condition earlier this month, the members immediately began living in separate quarters following the advice of medical staff in order to prevent the possibility of other members becoming infected. However, with the recent outbreak of infectious conjunctivitis, TAEHYUN AND HUENINGKAI have also contracted conjunctivitis from unidentified sources.

Fortunately, at the time of that announcement on Aug. 20, Soobin was noted to have been completely cured and Taehyun and Hueningkai were showing improvement. The statement added: "As a result, it has been difficult to proceed with music video filming and other production for the new album, and a rescheduling of the release date has become unavoidable."

Medical staff also reportedly advised the boys to refrain from performing at other events in August like the Soribada Best K-Music Awards on Aug. 23 and the Kansai Collection 2019 Autumn & Winter show on Aug. 27. Obviously, it's not hard to make the jump that the boys were always planning on sitting out of the 2019 Video Music Awards.

Frankly, pairing conjunctivitis with a new album release has got to be stressful for a young group. But don't worry, TXT! Your growing fanbase is ready and waiting for you whenever you're ready to unleash what is bound to be a masterpiece.

Feel better and see you soon! (No pun intended. Ugh.)

More like this
This Theory About The Songs In BTS' "Butter" Concept Videos Will Blow ARMYs' Minds
By Michele Mendez
Will Sandra Oh Return To 'Grey's Anatomy'? Here's What She Said
By Dylan Kickham
Juliette Porter Teases 'Siesta Key' Season 4 Drama — EXCLUSIVE
By Rachel Varina
Stay up to date