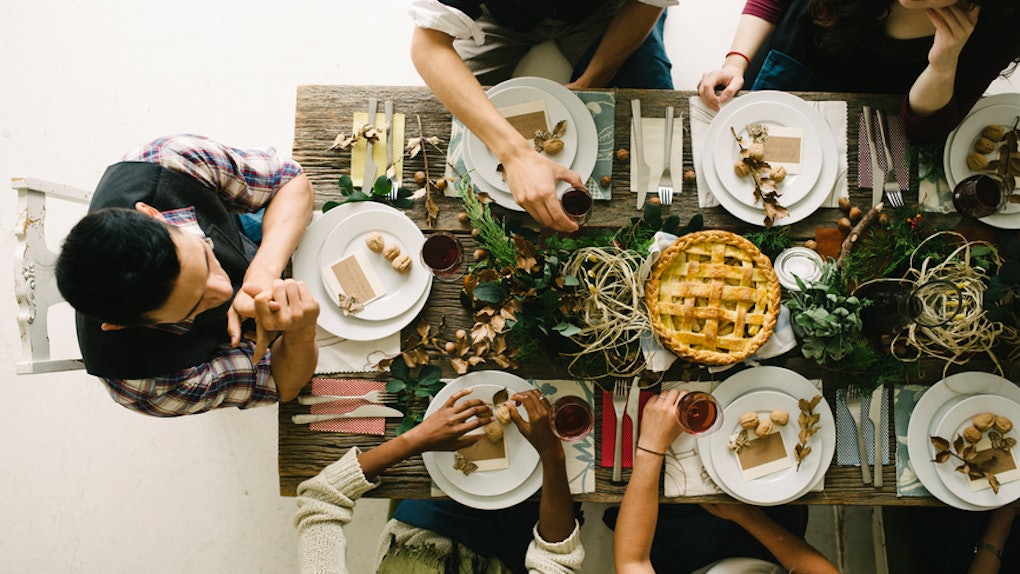 Why Is Thanksgiving Always On Thursday? Here's The History Behind Your Favorite Holiday

The history and reasoning behind holiday traditions can feel a little mysterious to me at times, and Turkey Day is no exception. Who decided turkey was the best main course? Why do people put those small marshmallows in yams? Do people actually enjoy watching the parade? Why is Thanksgiving always on a Thursday?

Well, there is, at least, an answer to that last question. As it turns out, it was all Abe Lincoln. While in 1789, George Washington declared Thursday November 26th a Thanksgiving holiday, in the years after that, the date moved around a bit and was announced yearly via a presidential proclamation and even came on different days and months. (Thanksgiving in July? So weird.)

Then in 1863, ole honest Abe proclaimed in the midst of the Civil war that the last Thursday of November would become the rule of thumb for celebrating the holiday. It's been like that ever since - save for one year when Franklin D. Roosevelt tried to move it back a week to give people a little more time to do holiday shopping and boost the economy. No one took to the idea, so he moved it back.

But even before that, it was writer Sarah Josepha Hale (writer of Mary Had A Little Lamb) who had made a long campaign to make Thanksgiving an annual American holiday celebrated by having a feast, after reading about what we consider now to be the first Thanksgiving in the diary of a Pilgrim.

But the first Thanksgiving is rather misunderstood.

In grade school days, you may recall being told that Pilgrims invited the native people to dinner and they sat down at a big table and shared some a big meal and some laughs.

In reality, the timeline and history of events is a little hazier.

What we consider to be the first Thanksgiving apparently happened in 1621, when colonizers in Plymouth, MA threw a three day long festival of successful harvest season, at which about 90 members of the Wampanoag tribe were in attendance.

The Wapanoag were, in fact, the people who taught the Pilgrims how to successfully harvest the land in the first place.

The Wapanoag traditionally had celebrations to recognize nature and good harvest seasons, and celebration of harvest and thanks had also long been a European tradition - one that Pilgrims and Puritans carried over into the colonies. But the Pilgrims didn't

The American Thanksgiving traditions as we know them today are a mostly a combination of both Pilgrim tradition and Puritan tradition. The Pilgrim celebration of harvest and bounty and the Puritans more pious observation of gratitude. It wasn't until later on that the Plymouth Thanksgiving of 1621 was considered "the first" in relation to our own November thanksgiving tradition.

And while that particular celebration was a moment of cross-cultural connection, as James W. Loewen, a sociologist and author told The New York Times, many tellings of Thanksgiving history tend to leave out the conflicts after, like plague wipeout and annihilation of native people. He said, “we might as well take shards of fairness and idealism and so on whenever we find them in our past and recognize that and give credit to them."

Nowadays, the Thanksgiving holiday is associated with things like pumpkin pie, football, and parades.

Oh yeah, and huge freakin' turkey meal with your people at about 4 PM.

(And no, apparently none of those things were at that original meal, the Pilgrims and natives were eating things like seal and swan, which is gross.)

Anyhow, while I certainly love me some pie and can't always complain about a good parade, I have to say that the coolest part of Thanksgiving, in my opinion, will always be that whole "being thankful" thing. While sometimes its not possible to be with family or your closest friends during the holidays, or on the other hand, if the holidays just plain and simple feel like an overwhelming bummer to you, try to let yourself at least enjoy a little gratitude this Thursday with whatever meal you end up eating, even if it's frozen pizza.