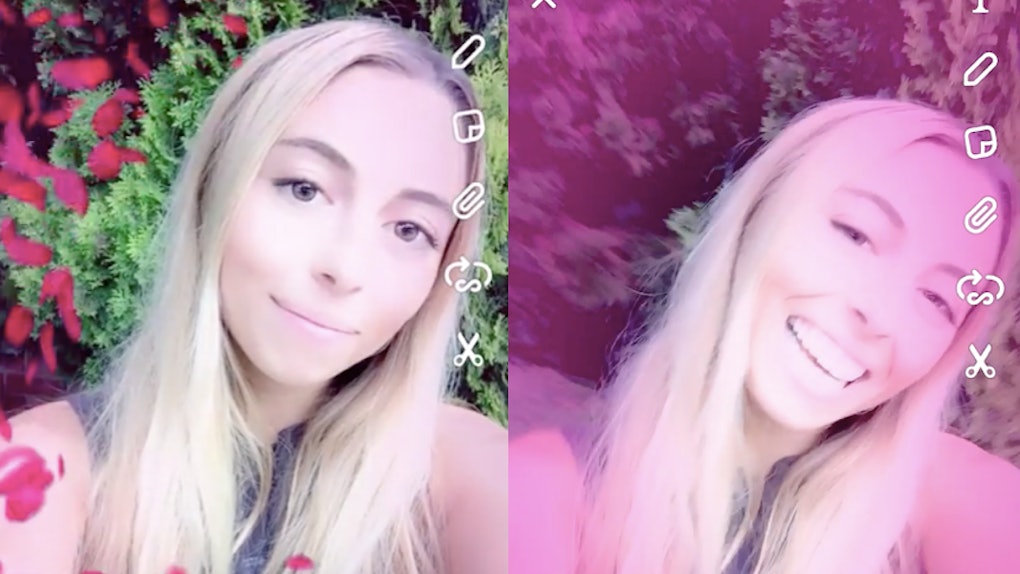 Why Don't I Have Voice-Controlled Snapchat Lenses? There Might Be A Few Reasons

I always get serious FOMO whenever I see someone using a Snapchat filter that I can't find on my phone yet. Whenever that happens, I periodically scroll through my Lens carousel and frantically search for the feature. You might be feeling the same way right now, because Snapchat rolled out brand new Lenses on Wednesday, Aug. 1. The newest additions to the app respond to your voice and react to specific words that you say. If you can't find them on your phone, you might be wondering why you don't have voice-controlled Snapchat Lenses. There might be a few reasons why you don't see them yet, and I'm here to help.

Before I dive into the possible reasons why you don't have the Lenses, let's talk about what they specifically do. (You should know exactly what you're looking for, right?) Believe it or not, the voice-controlled feature within the app literally listens to you speak. When it hears simple key words — such as "hi," "yes," "no," "love," and "wow" —  the Lenses become animated.

So, why don't you see them on your phone? There might be a few reasons.

Make sure you're looking in the right place.

More specifically, the new Lenses will be located to the right of your camera within the carousel — so make sure you're looking in the correct spot when you're trying to find them.

Try logging in and out of the app before looking for the Lenses.

Unlike other application roll-outs, you won’t need to update your Snapchat app to get the new voice-controlled Lenses (shocker, I know). A Snapchat spokesperson tells Elite Daily that users should see the new feature automatically.

However, the company does suggest logging in and out of the app to ensure the new Lenses appear on your screen. If that doesn’t work, you should restart your Snapchat app completely. (In other words, you won't need to keep your Snapchat up-to-date for this one.)

Be patient; the feature is rolling out.

Upon its announcement, the company specifically said that the new voice-controlled Lenses "will begin to roll out to Snapchatters globally," starting on Aug. 1. So, my friends, you will have to be patient. If the Lenses didn't hit your phone automatically, they're probably on their way. However, Snapchat tells Elite Daily that the new Lenses were released for all countries the morning of Aug. 1, so everyone should have immediate access to them.

If you've checked the Lens carousel repeatedly, logged in and out of your app, and waited impatiently for the new Lenses to come, sit tight — you should have them soon. While you're waiting, you can always play with Snapchat's new "Snappable" games. Unlike the new voice-controlled Lenses, these games become activated by your facial expressions. They're really fun, and will probably get you ready for the voice-controlled Lenses that you're longing for.