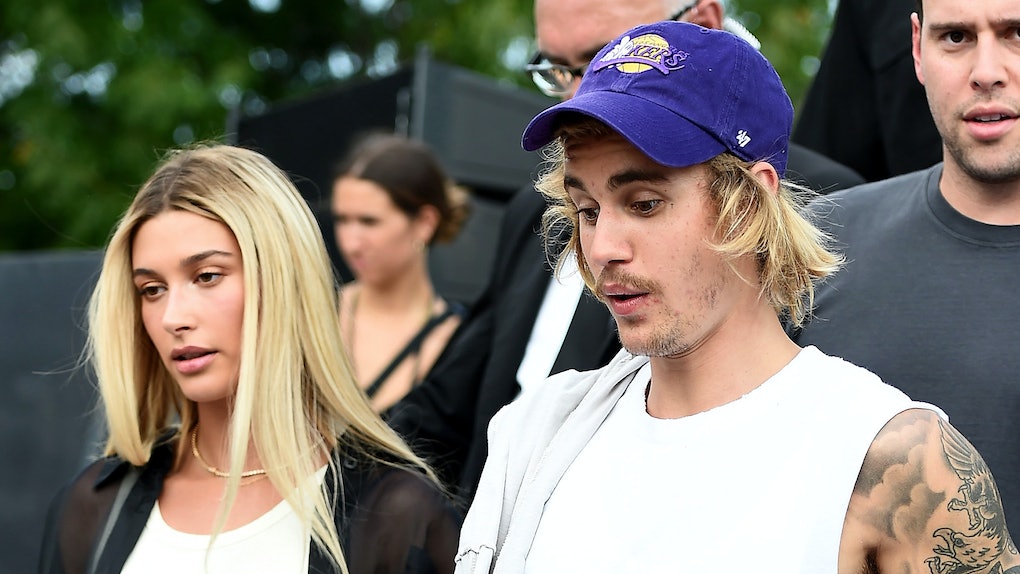 Why Doesn't Justin Bieber Wear A Wedding Ring? He & Hailey Baldwin Have A Good Reason

Keeping up with Justin Bieber and Hailey Baldwin's relationship status is a full-time job (quite literally, in my case). In May 2018, Baldwin was rumored to be dating Shawn Mendes, but by early July, she was making out with Bieber in the streets of New York City (Sorry, Shawn!). On July 9, Bieber announced he and Baldwin were engaged on Instagram and, already, fans were having trouble keeping up with the lightning-fast speed of Jailey — but the couple wasn't slowing down. They were reportedly married at an NYC courthouse on Sept. 13. Elite Daily reached out to Bieber and Baldwin's teams previously about the reports, but did not hear back by the time of publication. There have been conflicting rumors (and tweets) about whether Bieber and Baldwin are married, but it's looking more and more like the pair is legally wed. So, why doesn't Justin Bieber wear a wedding ring?

It's a good question. If the pair is, in fact, married (which we really don't know for sure just yet), one would expect Bieber to be wearing a wedding band in pictures. But alas, the "No Brainer" singer's fingers have been bare in recent paparazzi pictures.

So what's the deal? After all, Bieber reportedly called Baldwin his wife during a trip to the Stratford Perth Museum in Ontario, Canada, to view an exhibit dedicated to the Canadian-born pop star. "We were so pleased to have such a warm and special guest visit the museum yesterday (along with her very special husband 😊)," the museum wrote on Instagram about the couple's visit, going on to explain that, "Justin very graciously introduced Hailey as his wife.”

According to a recent report by Entertainment Tonight, Bieber has a good reason he's not rocking a wedding band despite his reported legally married status.

"Justin and Hailey are legally married, but Justin is telling friends he isn't planning on wearing a wedding band for a while," a source told Entertainment Tonight. "As much as Hailey and Justin are public about their relationship, they are trying not to make a spectacle of it, and that is why they kept their marriage under wraps and got engaged without telling anyone." Elite Daily reached out to Bieber and Baldwin's teams about the report, but did not hear back by the time of publication.

I don't know how much not wearing a ring is going to help quell the Jailey spectacle, to be honest. I mean, it's no fault of their own, but when Bieber and Baldwin breathe, there's bound to be a spectacle. So you might as well make fans' days and slap a ring on it, Biebs! Totally up to you, though. I'm just sayin'.

It looks like Bieber and Baldwin are doing their own thing when it comes to their relationship — societal norms be damned!

"Justin and Hailey are marching to the beat of their own drum when it comes to their relationship, keeping everyone close to them on their toes," the source continued.

But a formal wedding is on the way, apparently. "The couple kept their marriage a secret from a lot of people," another source told Entertainment Tonight. "They still plan to have a more formal wedding, but for them this intimate ceremony was exactly what they wanted."

According to TMZ, Bieber and Baldwin won't actually consider themselves officially married until they have a traditional religious ceremony. Elite Daily reached out to Bieber and Baldwin's teams previously about the report, but did not hear back by the time of publication.

Maybe Bieber will start wearing a ring once their formal wedding day comes? I can't wait!