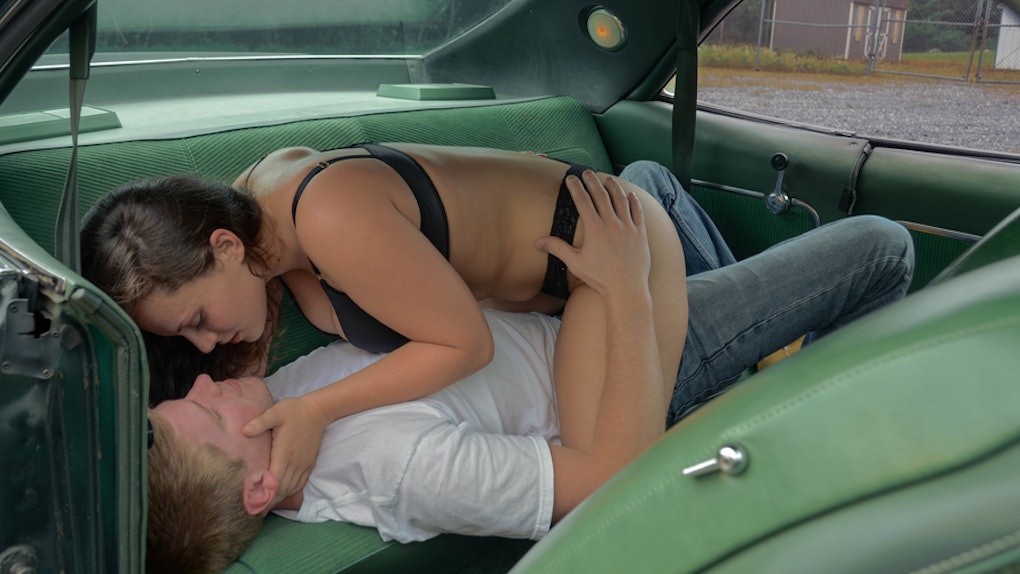 Why Do People Like Having Sex In Public? Experts Reveal The Real Thrill Behind It

Have you ever had — or wanted to have — sex in a public place? It's a common enough fantasy (and movie trope), but why do people like to have sex in public so much? Is it just the thrill of possibly getting caught? Or is there more to it? For instance, if sex in a car counts as public, then (confession time) I've definitely had it (sorry mom and dad).

My public sex heyday was shortly after I graduated from high school. Both my boyfriend and I were still living at home and so we had no privacy, except of course, the back of his covered truck where we kept an inflatable mattress. We called it the "park and pork." So romantic, right? For us it was about convenience, but if I'm honest, it was also a bit about the thrill of breaking a taboo.

Fortunately for us we were never caught, so it’s just a fun, crazy memory, but looking back it was actually really risky — and I knew it was at the time. So why take the risk? What is it about public sex that is so enticing we can't seem to resist? To understand the appeal, the science behind it, and even get some helpful tips on how to have sex in public more safely, I turned to the experts.

When you think of the appeal of public sex, the first thing that comes to mind is the thrill of getting caught — or, like in my case, simple convenience. Those are definitely factors, says Jessica O’Reilly, host of the @SexWithDrJess Podcast. “Sex has been so strongly relegated to the private sphere,” she tells Elite Daily. "So bringing it into the public (with consent) can be empowering, freeing, and exciting.” She also points out the more sensual draw of “the feel of fresh air against the skin — and the experience of various temperature changes” as a reason people enjoy sex outdoors. People also have public sex to spice things up by escaping “from familiar and predictable surroundings [to increase] passion and excitement." And of course, for some folks it’s just their preferred kind of kink. Exhibitionists enjoy being watched and giving pleasure to consenting voyeurs.

All those reasons are valid, but there is another reason people enjoy sex in public, and that’s our brain chemistry. Relationship expert Dr. Dawn Michael of The Happy Spouse explains that, from a scientific perspective, sex in public causes the brain to release the neurohormone dopamine. “It is the same hormone that gets released when we do something that creates excitement, like riding a fast car or zip lining, as well as exercise,” Michael tells Elite Daily. “Dopamine also affects desire and can increase arousal in most people. Arousal is one of the main reasons why it may feel so good.”

While there is nothing wrong with being turned on by public sex, if you want to actually do it, you need to do so safely. According to a recent recent SKYN Condoms Millennial Sex Survey, 27 percent of 25-29 year olds surveyed have had sex in public. But non-condom users (34 percent) were more likely to be adventurous about locations than condom users (21 percent). Public sex may seem like a spontaneous experience, but you should always be prepared to be safe. In the words of one of my all-time favorite drag queens, Chi Chi DeVayne, “I don’t get ready — I stay ready.” Make that your safe sex motto.

In addition to protecting your heath, there are other steps you can take to make sure you are having safe public sex. O’Reilly suggests picking a venue that will protect you legally. “Some sex clubs allow sex on premises and several offer rooms that allow others to observe,” she explains. “It’s important to note that rules of consent also apply at sex clubs — you still want to ensure that all present parties feel comfortable and respected.” Speaking of consent, that’s an extremely important factor in any sex act, including public sex, because, as O’Reilly explains, “if the voyeurs don’t consent to watching, your desire for sex in public isn’t simply a personal preference, but a violation.”

If that all sounds a bit more… advanced than you would like, then you don’t actually have to have sex in public to get the thrill of it. “Some fun ideas are played out in the ‘thought of’ without it being a problem," says Michael. "For instance, wearing a dress without panties and telling your partner that you are not wearing any underwear. Talking about what you want to do to someone in public but not actually doing it. This can be just as fun without the fear of getting in trouble.” She offers one last bit of very important advice: “No matter what, bear in mind that you'll always be subject to your local laws.” Because yeah, the only person you want slapping cuffs on your wrists is your partner — with your consent.