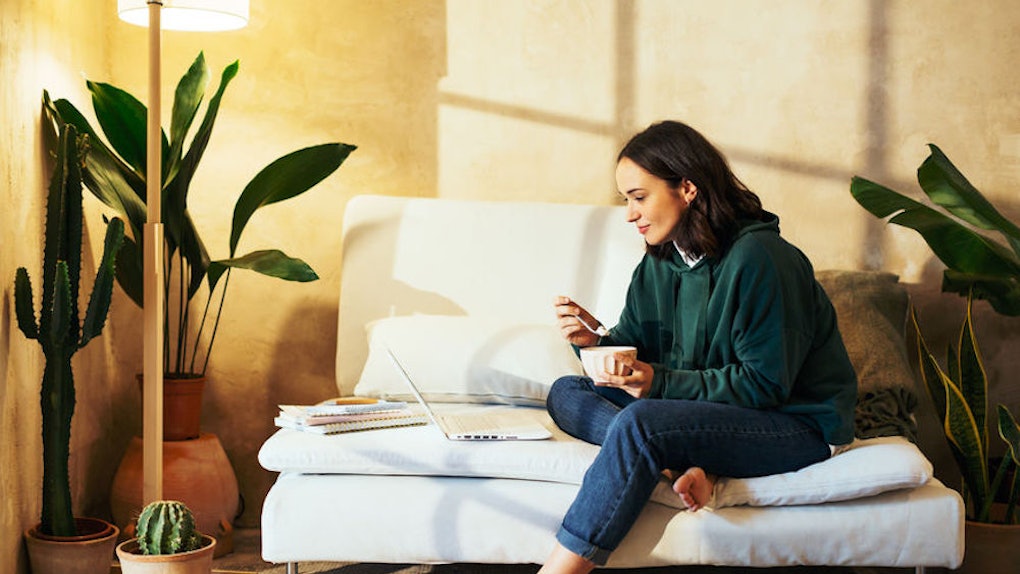 Why Do I Wait To Pay Rent At The Last-Minute? Experts Say There's A Lot That Goes Into Your Adulting Habits

Adulting can be a love-hate relationship. On the one hand, you might be thrilled to finally live on your own and get excited every time you purchase a new painting, add a cute succulent to your kitchen windowsill, or fill the refrigerator with your favorite snacks. On the other hand, you're in charge of paying all the bills — utilities, cable and WiFi, sometimes heat and hot water, and of course, rent. That's when the adulting struggle gets real. Even though you know it's a payment you have to make every single month, you might be asking yourself, "Why do I wait to pay rent at the last-minute?"

I'm often in the same situation. I've tried to be financially responsible — whatever that means — when it comes to getting the check out on time, but sometimes my procrastination gets the best of me. The reminder notes get ignored. The blank check I hang on my fridge gets overlooked. Nothing seems to work, unless it's less than a day before rent's due and the crippling awareness I'm going to have to overnight my rent check again sets in. That's the only thing that works.

Why do I do this? Nothing about paying rent every month changes. I know it's coming — I have 30 days (sometimes 31) to get it to where it needs to go on time. And unless my rent has increased or my building was sold, it's not like the details change. So why am I constantly procrastinating?

I interviewed Courtney Glashow, LCSW, owner and psychotherapist at Anchor Therapy in Hoboken, New Jersey, to get a better idea of what's really going on when we wait until the last minute to pay.

Glashow first defines what she considers to be the "last-minute" when it comes to paying rent. She says there's a difference between waiting until 11:59 p.m. the night before the first of the next month to turn in your envelope and waiting until the fourth day of the next month. In the first scenario, your actions are arguably acceptable and responsible, because your check will (depending on how far you have to send it) still be turned in on time. In the second scenario, you're facing potential consequences like getting charged interest or having to pay a penalty fee. The question still remains, though: Why do we do this?

Glashow says someone who pays their rent at the last-minute is likely "not too stressed out," or an anxious person. Maybe they don't worry about their bills until they realize on the due date that they're, well, due, and may be forgetful. In addition, maybe this person is "living their life more carefree" and likely do other things at the last-minute, like pack the night before a trip or show up 30 minutes late to a dinner reservation.

This type of person "may even feel in control of their life," because they they're able to get things done on time without prior planning or execution. Glashow says, "They have a deadline and they will do the work in the time needed right before the deadline," including when it comes to paying rent. They'll still accomplish the task successfully, even if their process seems messy or disorganized to someone who always turns their rent in on or ahead of time.

In an interview with Elite Daily, Dr. Lara Fielding, a licensed behavioral psychologist and author of Mastering Adulthood: Go Beyond Adulting to Become an Emotional Grown-Up, says we can't make generalizations or assumptions around procrastination, because "it can suggest an infinite number of combinations of thoughts and feelings" around paying bills, or other time-sensitive tasks. Fielding says someone may feel more in control when doing things at the last-minute, like Glashow mentions, or they may procrastinate because they're not very organized or lost items needed to complete a task. She also explains that, as humans, we are drawn to things that make us feel comfortable, and that procrastination is a normal impulse when we're avoiding something uncomfortable. So waiting until the last-minute to do things is not necessarily linked to our personality.

"Personality is not fixed, but instead, a sum total of the interaction of one's emotions, thoughts, and action tendencies," Fielding says. In other words, it's more so a coping mechanism for some people, like those who pay their rent right before the deadline. Someone who pays well in advance, however, finds comfort differently.

Glashow says this type of person maybe isn't so laidback in comparison. Someone who's hyper aware of paying ahead of time might create a lot of "what-if" scenarios in their head and typically isn't as "confident and in control of their thoughts and worries."

According to Glashow, when it comes to their rent check routines, they don't mess around. They pay their bill right away or on the exact day it's due because they're worried they'll otherwise forget. They may also believe their landlord will think negatively of them if they turn in rent at the last-minute.

Glashow says some people, though, are in the financial position where they have to pay their rent and other bills at the last-minute. It's not a matter of personality or lifestyle choices, but rather a situation where they're living paycheck to paycheck, struggling to manage their financial responsibilities, don't have the financial means to pay ahead, may be waiting for a check to clear, or for a check to come in to be able to afford rent in the first place.

This type of situation causes its own anxiety and emotions. For example, it may cause you to dodge logging into your bank apps, dread the times of the month when your bills are due, or panic about not being able to reach your financial goals. Fielding notes, "Watching the numbers descend in our bank accounts, or worse, fall below zero, is painful," — and that procrastination in that scenario is "completely normal." So she also offers up some tips that can help you manage your responsibilities and procrastination habits so that it feels possible to take action and commit to new or continuous behaviors.

Fielding suggests you should keep your "financial values and goals" in mind at all times and catch yourself when you're rationalizing or minimizing your bad habits. She says to ask yourself questions like, "What is cost of delaying?" "Will there be a fine?" and "Will [I] have time later?" and notice when something else in your schedule is simply requiring your attention more.

She also suggests being kind to yourself and "validating" the difficulties behind paying your bills, in addition to rewarding yourself after you pay your rent. My suggestion? Buy yourself your favorite cup of coffee before work instead of making it at home, or purchase a book you've been wanting to read. Part of creating or changing your habits can be treating yourself throughout the process.

Stephanie Genkin, Certified Financial Planner and Founder of My Financial Planner, an hourly financial advisor in Brooklyn, New York, tells me in an interview there are ways you can create an effective budget, too, so that whether you're in this kind of situation or not, you can hopefully experience better results.

I encourage young women to think of a budget as a spending plan. After all, that's really what it is.

First, Genkin encourages people to find a system that works for them and to re-define what a budget is and what it looks like. "I encourage young women to think of a budget as a spending plan," she says. "After all, that's really what it is." She also says to not necessarily track your all of your expenses, but instead follow something like the 50-20-30 percentage budget concept created by Sen. Elizabeth Warren.

This budgeting system splits up your monthly income, after taxes have been taken out, into three chunks. The first chunk — the 50 — goes toward what Genkin calls your "needs." This includes your bills for rent, transportation, utilities, and insurance. The second chunk — which is the 20 — goes toward your savings account or debts you need to pay off. And the last 30 percent goes toward "fun" things, like going out to dinner, restocking on shampoo, or taking a weekend trip.

There are also apps you can download right on your phone that can be helpful with budgeting and creating successful habits. The Mint app is great for creating attainable budget plans and keeping track of your different accounts, and the Qapital app makes saving money much less boring by allowing you to set up goals.

Genkin also says sometimes not having a system when it comes to your bills and money might help you push aside your problems in the moment. But that's not particularly helpful in the longterm, and you'll always be left scrambling later on. So instead of waiting until the last-minute, face the facts and the situation head-on. Don't ignore what you already know about rent; it's inevitable that you have to pay it. "It happens on the first of the month," Genkin says. "Deal with it."

Actively choose to not procrastinate, and grab your pen and checkbook a few days in advance. According to Fielding, someone who always pays their rent well before it's due is able to "override the impulse" to procrastinate or push aside the discomfort attached to paying bills. She says it comes from their "ability to maintain a conscious connection to what is important and meaningful to them and longer-term goals."

Of course, if you've already established a system that works for you, you might never stop sending your rent the night before it's due. One day, you may change your habits, but 'till then, at least you won't be shouting at the universe every time you wait until the last minute.