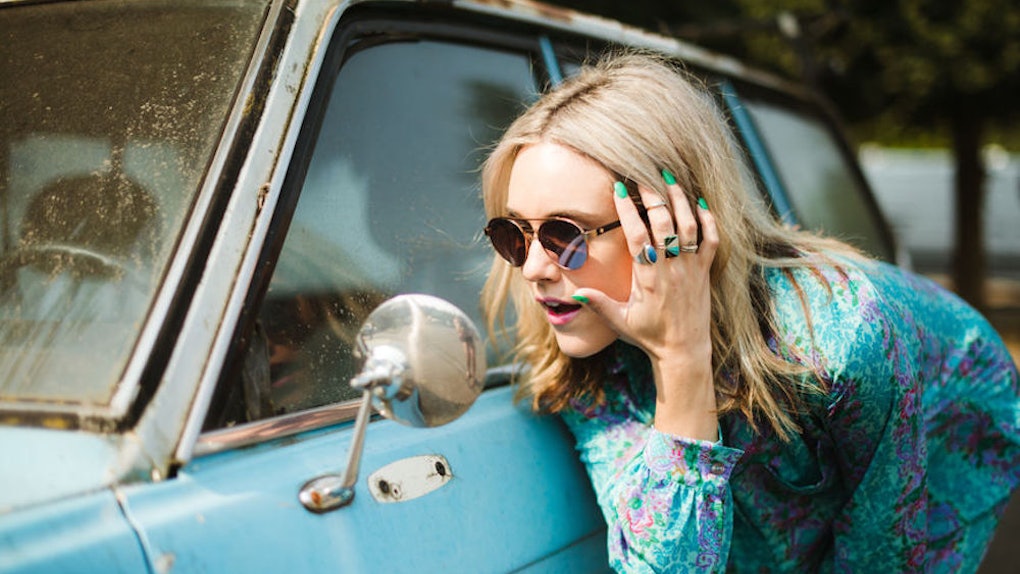 Why Do I Turn Down The Radio When I Parallel Park? Experts Say Your Brain Is Working In High Gear

I can confidently say I'm not skilled at parallel parking. Most of the time I have to adjust my car again and again, open the door to see if my tires are inside the lines, and eventually sigh to myself that I've done "good enough," and just be done with it. The entire time, the music is on the lowest volume setting possible, because, well, I'm not exactly sure why. Seriously, why do I turn down the radio when I parallel park? Is there some possible way that this helps me do a better job?

I spoke with Clarissa Silva, behavioral scientist, relationship coach, and creator of Your Happiness Hypothesis Method, to see if there's a method behind the madness. Because once I started mentioning this dilemma to my friends, most agreed they too turn down the music to parallel park, and none of us have a single clue as to why.

Maybe this feels obvious, but when you're parallel parking, your brain is working in high gear; it's trying to do multiple things at once, like fit a huge mass into a small space while also trying not to hit any surrounding cars or objects or, uh, pedestrians. On top of all that, you're trying to squeeze your car into a space that you're not 100 percent sure will fit. Silva says turning down the radio actually helps your brain concentrate on one function (or sense) at a time.

"Directing [your] attention to listening interferes with the visual parts of the brain," she says. It interrupts your visual sense, which is your ability to detect and interpret, and doesn't allow it to do the best job that it can do.

According to Livestrong.com, the visual parts of the brain (that Silva mentions) are located in the occipital lobe, which is the home of the visual cortex. The auditory cortex, or what we use to listen, is located in the temporal lobe. When we drive or park, the temporal lobe works with the frontal lobe, which is typically in charge of making decisions. It asks: Are the sounds we're hearing significant or not? If the sounds, like the music coming from the radio, are significant, then we may turn them down. Silva says, "In essence, we turn down the music to see better."

Think about the last time you tried to study for an exam. You may have also been responding to texts from your friend and listening to your roommate's relationship drama simultaneously. It likely felt like your brain was running a marathon to keep up with everything happening at once, and you desperately wanted to eliminate the excess noise. According to Silva, that's because "our brains aren't really designed to handle multiple hard tasks at the same time," whether we think we can handle it or not.

This multi-tasking can lead to what the American Psychological Association refers to as "cognitive overload." According to the research published via the American Psychological Association, psychologists who experimented with the effects of multitasking found it often takes more time and leads to errors. In the case of driving a car and being distracted by noise or a cell phone, you're not fully focused on the act of driving, which means your vehicle can crash into an obstacle during the time your attention is lost. In other words, switching your focus can sometimes cause dangerous errors, and keeps you from completing tasks successfully.

Here's where things get tricky: Our brains are wired to handle multiple less-demanding tasks with ease. Silva says this is because our brains are "wired to handle multitasking simple tasks," like items on our daily to-do lists. If you're taking a glimpse into my life, this may look a lot like eating an orange while watching reruns of Queer Eye on Netflix and listening to my favorite podcast while cleaning my apartment, because these things don't require a lot of focus.

Parallel parking isn't one of those "simple" tasks because it requires coordination, and there's also the fact that you're operating a piece of heavy machinery. So parking your car requires complete focus, zero distractions, and little background noise.

Silva says turning down the music gives you extra mental space to focus on the task at hand. You have room to heighten your senses and allow your brain to work through the steps: line up your car, turn your wheels in the opposite direction you want to go, inch backward, turn the wheel, keep turning, check your mirrors, make sure you don't hit the curb or the other cars, adjust, and move forward. You can't do all of that with Ariana Grande's "God Is a Woman" blasting.

People turn down the radio to parallel park because it requires more attention. Extra sounds can be [overstimulating].

Katie Ziskind, a marriage and family therapist who's also a yoga therapist focusing on the acts of being present and eliminating distractions in her training, agrees. She compares listening to music while parallel parking to taking a test in the middle of a circus performance.

Imagine this: You're surrounded by people who are talking and laughing while upbeat music plays in the background. Your brain is trying to process multiple-choice questions, the smell of popcorn, the fact that you probably now want popcorn, and so much more. Clearly, it's not the best atmosphere to be in, because you're trying to concentrate on an important task. In order to do that, you'd need to eliminate the distractions to be able to focus on the test.

Parallel parking is no different, and is better done with "very relaxing music or quiet," according to Ziskind. After all, the last thing you want to do is scrape the side of your car against the one you're trying to park behind, or cause a fender bender. Ziskind mentions that being able to concentrate by turning down the music or eliminating the noise means you have better odds of completing the task safely, which is essential.

According to Ziskind, turning down the radio when you parallel park could also mean you're a "focused thinker" and a "highly sensitive person." She says people like this "are more sensitive to sounds and sensory overload," especially when trying to focus on tasks like parallel parking. Being a highly sensitive person and focused thinker might mean you're aware of the motions involved, though it doesn't say anything about your parking skills.

Music releases dopamine, serotonin, and norepinephrine, which help you feel relaxed and happy while you’re doing something that doesn’t require new attention.

Silva adds, "If you are accustomed to [a certain kind of] multitasking, you have trained your brain to tune out one thing to manage many things." Your brain has learned how to tune out the sound of the radio and concentrate on parallel parking or something else. In that case, the radio isn't causing you any stress or keeping you from focusing. It's helping you "feel relaxed and happy while you're doing something that doesn't require new attention."

According to Silva, "Music releases dopamine, serotonin, and norepinephrine." It benefits your overall mood and helps you perform better or faster. So, once you get used to parallel parking and the motions become second nature, it may become soothing to have music playing the background — maybe even at full volume.

For now, though, I'll stick to turning the dial down and celebrating every successful parallel parking job. I mean, who knows? One day I just might be jamming to the latest Jonas Brothers song while putting my car into reverse and sliding in between the white lines with ease. No settling for "good enough" required.