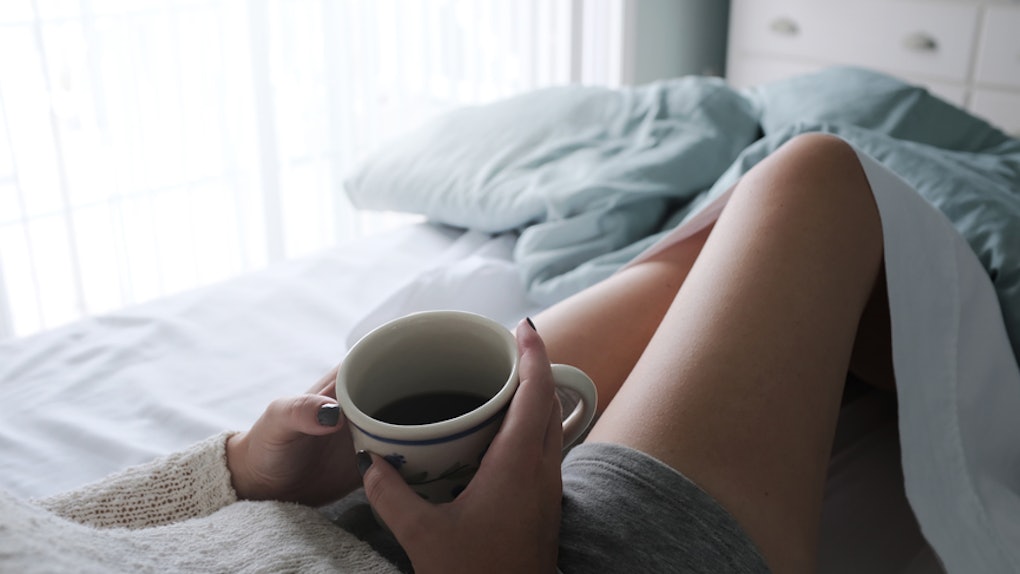 Why Do I Get Cramps When I'm Ovulating? Experts Say This Pain Is Completely Normal

The female reproductive system has a lot going on. Bleeding or not, if you have a uterus, you’re subject to reaping all the pros, and experiencing all the cons, of a period. Unfortunately, that might mean enduring symptoms even when you’re not menstruating, like if you get cramps when you’re ovulating. Unlike the irrational cravings your hormones trigger, though, there’s actually a term for cramping when you’re ovulating, called “mittelschmerz,” which is German for “middle pain.”

Now, you might not always notice when you're ovulating because, well, your actual period is sort of the main attraction, if you will, of your whole menstrual cycle, so it kind of steals the show — especially if you're on birth control. But I can tell you from experience, when I decided that going off the pill was right for me, I started experiencing my menstrual cycle like never before. Birth control pills basically act as a buffer: Your body absorbs artificial hormones from the pill to stabilize your insides and make symptoms less intense, but it also quiets down the other four phases of your cycle, as well. If you’re not familiar with all of the stages of your menstrual cycle, there’s menstruation, follicular, ovulation, and the luteal phase. Once I subtracted meds from the equation, I felt every single phase to its fullest, especially ovulation.

Ann Mullen, director of health education for Cycle Technologies, tells Elite Daily that any time between days 12 and 14 of your cycle, ovulation begins. This is when a mature egg “erupts from a follicle in your ovary," she explains. In other words, this is prime time for pregnancy. Here’s the thing, though: Not every woman is going to feel ovulation happening, but some do, and oftentimes, it's in the form of pain and discomfort in the lower part of the stomach. This is what's called mittelschmerz, and even though Mayo Clinic reports cramping during ovulation doesn't require medical attention normally, there’s no harm in calling up your OBGYN or making an appointment to make sure everything’s copacetic down there.

Still, if not every woman experiences ovulation pain, you might be wondering where, exactly, the cramping stems from.

The reason why some women might experience sharp stomach pains during ovulation, while others don't even have a clue that they're ovulating at all, is because, to put it simply, each body, and every uterus, is different. Either way, Mullen says, it’s all normal. In fact, Verywell Family reports that 50 percent of women experience pain during ovulation at some point in their lives, while 20 percent deal with it every month. Rest assured, if this pain pertains to you, you’re certainly not enduring it alone.

Though experts haven't been able to pin down one specific reason why ovulation might be painful for a woman, there are some theories. On the one hand, Mullen tells Elite Daily, it could be because the follicle containing the egg “stretches the membrane of the ovary” a little too far, but there’s also reason to believe the root problem is the egg itself, and that the physical rupture “causes some pain and can even cause blood spotting.”

And while you might lump ovulation and menstrual cramping into the same basket, keep in mind that mittelschmerz really is its own thing, and will therefore likely feel pretty different from your typical PMS cramps. Case in point: Amy Autry, M.D., a clinical professor of obstetrics-gynecology and reproductive sciences, told Everyday Health that, depending on which ovary is releasing the egg, “you’ll only [feel pain] on one side of your lower abdomen."

In terms of how long the pain will last, Mullen explains, it's really up to the woman’s individual body. Again, some women won’t feel a darn thing when they're ovulating, while others can feel the effects anywhere from a few minutes to “a couple hours to a couple days,” she tells Elite Daily.

Cramping during ovulation is normal, but if the pain lasts longer than a few days, and feels extreme, don't wait to talk to your doctor.

In an exclusive interview with Elite Daily, Dr. Rachel Zigler, an OBGYN in Missouri, and a fellow with Physicians for Reproductive Health, explains that, if cramping during ovulation is severe, and “doesn’t resolve with time or an anti-inflammatory medication like ibuprofen,” this could be a red flag for something more serious.

If the pain occurs every month, Dr. Zigler says, then it’s likely chronic mittelschmerz. If not, consult your OBGYN ASAP, as it could be a sign of “a ruptured ovarian cyst, pelvic inflammatory disease, or ectopic pregnancy,” which is when a fetus develops outside the uterus. According to Mullen, it could also be a sign of endometriosis. Keep in mind, though, these are all worst-case scenarios. To reiterate, cramping during ovulation is relatively normal; just keep tabs on how intense the pain actually is. When in doubt, never hesitate to talk to your doctor.

Much like your standard period cramps, the stomach pain you get during ovulation is 100 percent treatable.

Personally, I find that tracking my period closely, and jotting down in a calendar or journal when I start experiencing symptoms and what they are, really helps when my period isn’t too far away, because then I generally have a good idea of what to expect, and when to expect it. That way, if I start experiencing mid-cycle pain, I'll know if it’s normal (or not) for my individual body.

“[Using] a period tracker, like Dot, can help you keep track of where you are in your cycle,” Mullen tells Elite Daily, “so that you have this information for yourself or to share with your doctor as needed.”

Once you’re able to recognize for yourself that the mid-cycle cramps are normal for you, the next step is to take some sort of over-the-counter medication to ease the pain. Dr. Zigler tells Elite Daily that taking an anti-inflammatory, like ibuprofen, may relieve cramping, but a lot of women also take birth control, “such as the pill, the patch, the vaginal ring, injection, or implant,” to alleviate cramping from ovulation, as well.

Like anything else having to do with the female reproductive system, how your body responds to this process and what you do or use to suppress the symptoms is ultimately up to you, and what you're comfortable with. If you're experiencing cramping during ovulation every month, know that it's completely normal, but that it's always helpful to talk to your doctor about your options.