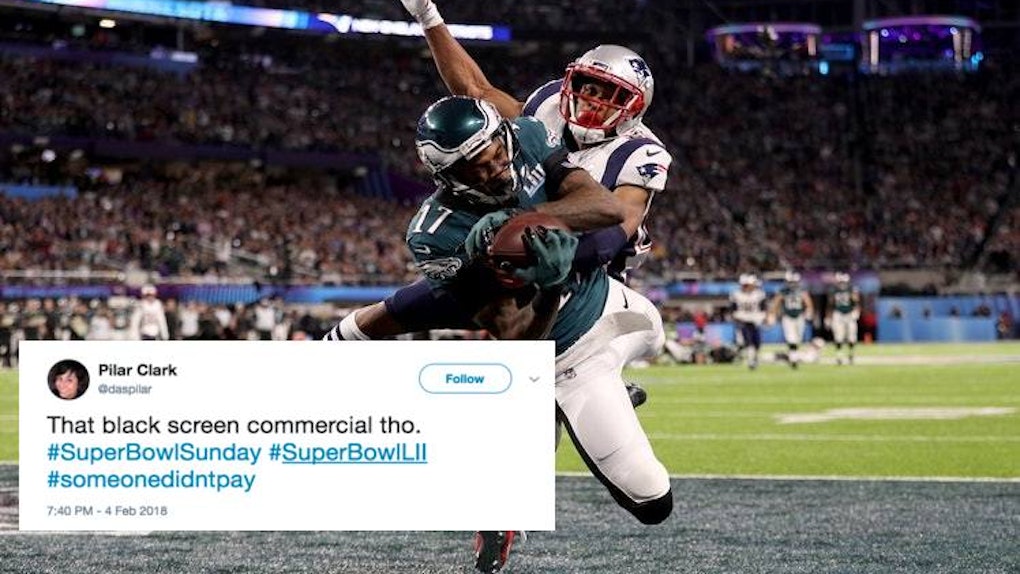 Why Did The Super Bowl Cut Out? Twitter Is Confused AF

Super Bowl LII is finally came, but about halfway through the game, Twitter became confused AF — and I was, too. Everyone's TV blacked out for what seemed to be an actual eternity even if it was only a short bit (29 seconds, actually, according to Fox2Now.com). You might be wondering why did the Super Bowl cut out? Naturally, Twitter is here to help all of us out with some pretty interesting theories and hilarious commentary. We can always count on the internet to come in oh-so-clutch at a stressful AF time with some memes and jokes to lighten the mood.

Seriously though — is there anything worse than watching the awesome Super Bowl and commercials, and then the TV blacks out?! I was wondering if either aliens were attacking the planet, or my TV died at a crucial part. Did one of my pups unplug the television because they wanted my undivided attention and were not having the Super Bowl vibes? WE NEED ANSWERS, AND WE NEED THEM STAT. WE CANNOT BE KEPT IN THE DARK, THANK YOU VERY MUCH.

The only thing that could have made the situation worse is if it was during my main man Justin Timberlake's halftime show. Hallelujah that was not the case, because if it were, sh*t would have probably gone down.

I'm not the only one who started to freak out when this Super Bowl blackout occurred. Prepare to LOL uncontrollably.

Some people were super confused and really wanted to get to the bottom of this sitch. It was totally unexpected, and many of us felt out of the loop.

For real though — WTF is going on?! At least we have Twitter to know we were not alone.

A lot of sh*t goes down when there's an unexpected blackout of any kind. Some pretty rad cats even got into trouble. #OOPS.

Others took this opportunity to be witty AF, and I am seriously LOLing.

Outages during the Super Bowl game are not totally out of the norm. According to CBS News, back in 2013 during Super Bowl XLVII in New Orleans when the Baltimore Ravens faced off against the San Francisco 49ers, everything blacked out and it lasted for over 30 minutes. Damn, Daniel — now that's a long time. There was no reason at the time why it happened. Was someone touching up their hair in the bathroom and blew a massive fuse? I do that at my apartment on the regular. Oops!

I mean, if the blackout this year happened during or after the halftime show, I would say it was because Justin Timberlake brought too much sexy back to even handle! We would all probably understand that, because when doesn't J.T. sing his way into our hearts and make us swoon? But for the record, according to NBC Sports speaking on what happened to create the blackout: "We had a brief equipment failure that we quickly resolved. No game action or commercial time were missed."

Fans even thought it could have been a faulty Super Bowl commercial that was meant to air but didn't.

I mean, even though a bunch of us were freaking out during this #SuperBowlBlackout timeframe and wanted to know exactly what was going on, we made do. It was the prime time to top off our beer, grab some more buffalo chicken dip, and even start digging into dessert. Because, let's be real — if you're seriously into the game, those chocolate chip cookies might have taken the back burner. And that, my friends, would simply be unfair. There's no denying that appetizers and snacks are a very important part of the game day tradition, and should be treated as such.