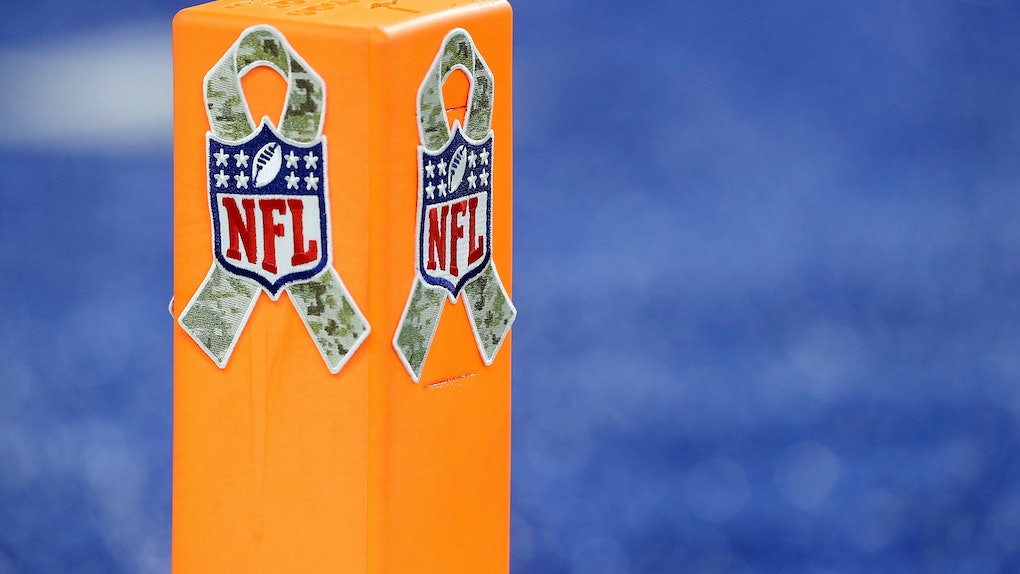 Why Did The NFL Reject A “Please Stand” Super Bowl Ad? Political Ads Are Forbidden

Even if you're not a huge football fan (or if your team did not make it to the Super Bowl this year), chances are you'll still be watching the game on Feb. 4. Even if you have zero interest in the two teams that made it to the final match-up, there's something that I think almost everyone can agree that they're looking forward to — the commercials. But this year it's not the TV commercials that are getting the media attention leading up to the big game, but a print ad that was rejected from this year's official Super Bowl program. So why did the NFL reject a "Please Stand" Super Bowl ad? The answer is a pretty simple one.

Every year companies shell out their finest advertising chops on ads that are as entertaining (if not more) as the big game itself. While most of us focus on the ads that we see during the broadcast of the game, there are also ads that companies and organizations pay to have included in the program that's passed out to those attending the game. For the 2018 Super Bowl, the veterans' group American Veterans (AMVETS) submitted a full-page color ad to the NFL. The ad features members of the U.S. Color Guard holding an American flag, with the hashtag "#PleaseStand" written across the top. The ad also encourages to make a $20 donation to AMVETS at the bottom by texting a six-digit number or scanning their provided QR code. But apparently the ad was rejected, according to a Jan. 22 letter from the group to NFL Commissioner Roger Goodell.

So why was this ad rejected by the NFL? It's pretty simple.

In a statement from the organization, a spokesman said it was due to the fact that the ad made a "political statement." NFL spokesman Brian McCarthy addressed the issue in a statement shared with USA TODAY Sports on Jan. 22. It said,

The Super Bowl game program is designed for fans to commemorate and celebrate the game, players, teams and the Super Bowl... It’s never been a place for advertising that could be considered by some as a political statement. The NFL has long supported the military and veterans and will again salute our service members in the Super Bowl with memorable on-field moments that will be televised as part of the game.

We can make the safe assumption that what made this particular ad political enough to be rejected by the NFL is the "#PleaseStand" message that AMVETS wants to make. The hashtag starkly contrasts the "take a knee" protests that caused major waves throughout the NFL's 2017 season.

The origin of the protest came when former San Francisco 49ers player Colin Kaepernick began kneeling during the national anthem to protest police brutality against minority groups during his 2016 season. Kaepernick explained to NFL.com that he was "not going to stand up to show pride in a flag for a country that oppresses black people and people of color." Once this protest caught on with other players during the 2017 season, Trump went on a Twitter rampage in September 2017 and called out the NFL for condoning players' decision to kneel. Trump also declared that any player that chooses to kneel should be fired.

After Trump directly attacked the NFL, the protest became even more politicized. Many saw "taking a knee" as an issue of free speech, or condemning Trump's choice to call any player who chooses to protest a "son of a b*tch." While the NFL players' freedom of speech was protected by the organization, AMVETS claims that the NFL is denying their own right to First Amendment privileges. In their response letter to Goodell, AMVETS National Commander Marion Polk wrote,

... freedom of speech works both ways. We respect the rights of those who choose to protest, as these rights are precisely what our members have fought — and in many cases died — for. But imposing corporate censorship to deny that same right to those veterans who have secured it for us all is reprehensible.

While both groups involved in this advertising dispute make fair points, Trump's involvement with the "take a knee" protest has perhaps made it too political for the NFL to acknowledge in any capacity. The NFL's reasoning is that the Super Bowl is an event for all Americans to enjoy, not for one political viewpoint to impose itself on another and vice-versa. And it seems as though this ethos was reason enough for the NFL to deny this ad.