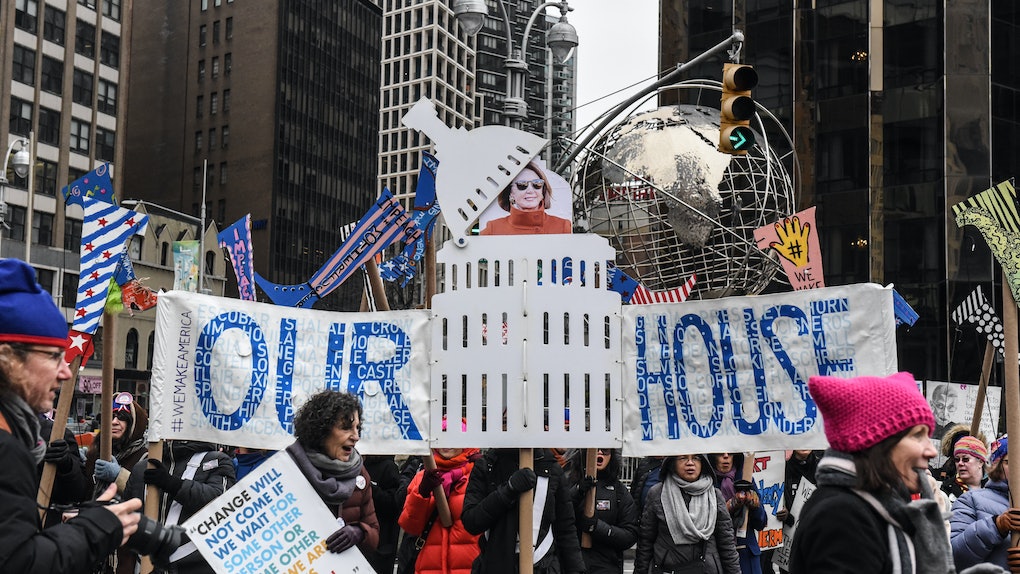 Why Are Women Wearing White To The 2019 State Of The Union? It's To Send An Important Message

After weeks of back and forth of whether the State of the Union was even happening, a new official date has been set. On Tuesday, Feb. 5, President Donald Trump will stand before Congress discussing both his accomplishments in 2018 and plans for 2019. However, tensions have risen between Democrats and the president in recent months, which has prompted some individuals to take a stand in a subtle, yet impactful, way. And what better way to make a statement than with a fashion statement? So, why are women wearing white to the State of the Union? It's for an important reason.

On Tuesday, Jan. 29, CNN reported that the House Democratic Women's Working Group has invited congresswomen of both parties to wear white to the president's State of the Union address as an act of solidarity. Florida Democratic Rep. Lois Frankel, who serves as the chair of the House Democratic Women's Working Group, spoke to CNN on Jan. 29 about the decision, explaining that the color white represents suffrage and solidarity among the women of Congress, and serves as a declaration to the public that women will not stand down in 2019.

"Wearing suffragette white is a respectful message of solidarity with women across the country, and a declaration that we will not go back on our hard-earned rights," Frankel told CNN.

The decision to stand in solidarity together during the 2019 State of the Union is not only in support of women, but also to honor the 100th anniversary of the Women's Suffrage Movement and the anniversary of the 19th Amendment, which gave women the right to vote and was passed in 1919 (it was ratified the following year, in 1920). The timing is relevant: In January 2019, America saw a record-breaking number of women entering Congress following historic victories and firsts in the 2018 midterms, particularly from the Democratic party. Major victories included the first Native American congresswomen (Sharice Davids and Deb Haaland), first Muslim congresswomen (Ilhan Omar and Rashida Tlaib), first black congresswoman from Massachusetts (Ayanna Pressley), first Latina congresswoman from Texas (Veronica Escobar), and the youngest woman to be elected to Congress (Alexandria Ocasio-Cortez), for a grand total of 42 women inducted as new members of Congress.

Even though wearing white has never been more timely than now, this isn't the first time political figures planned to wear white to a political event to send a message. In 2017, the Working Women's Group coordinated Democratic congresswomen to wear white to President Donald Trump's joint address to Congress (which takes the place of the State of the Union address in the first year of a new presidency) to not only honor the women's suffrage movement but also show their support for women's rights causes, such as affordable health care, reproductive rights, and equal pay.

The following year, many women in Congress went the other direction, also to send a message. In 2018, many women chose to wear black to the State of the Union address to show solidarity with the #TimesUp and #MeToo movements against sexual harassment and assault that were sweeping the country.

One thing is for sure, the 2019 State of the Union might be the most interesting one yet. The Feb. 5 address will come just days after a month-long government shutdown came to an end (for now, that is — the temporary compromise only lasts through Feb. 15). So, it's really up in the air what Trump will discuss while speaking to Congress, and how it will be received by the Democrats in the audience.

We will get to find out, though. On Tuesday, Jan. 29, Senate Minority Leader Chuck Schumer confirmed to CNN that he had chosen Stacey Abrams, the gubernatorial candidate in Georgia who narrowly missed a win against Republican opponent Brian Kemp in the 2018 midterms, to deliver the response. Abrams would have been the first black female governor in the state, and made headlines for her competitive race. She will be the first black woman to deliver a response to the State of the Union.

With a powerhouse like Abrams on their side, it looks like the Democrats are expecting to deliver one hard hitting response to Trump.

Truth be told, I'm surprised the State of the Union is even happening this year. However, judging by recent developments, it's sure to be a must watch event. Get those television sets ready, everyone.