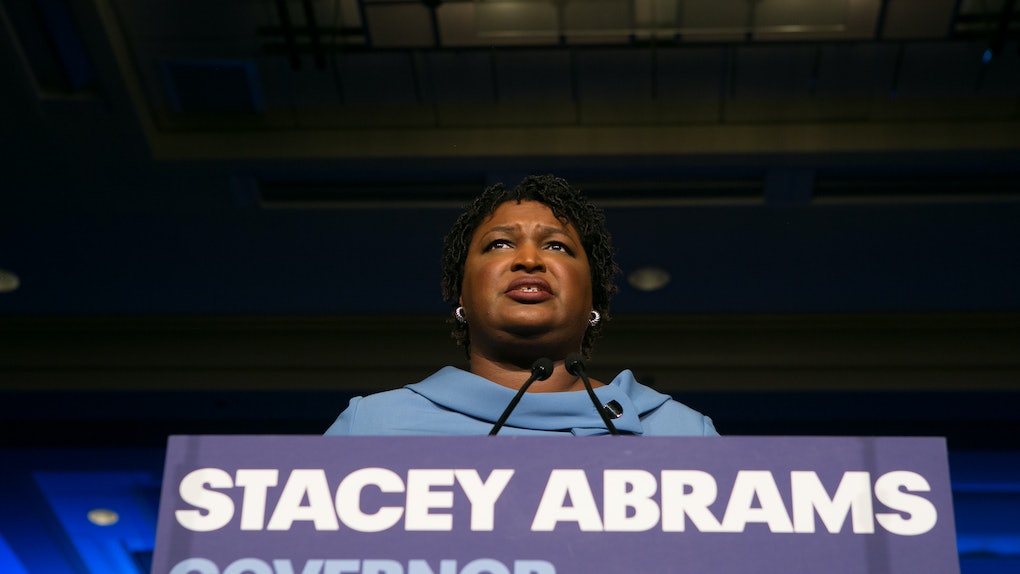 Who Will Deliver The Democratic Response To The 2019 State Of The Union? This Is Big

President Donald Trump's State of the Union address has been riddled with drama this year. But after some ups and downs, the new date has been set for Tuesday, Feb. 5. As to who will deliver the Democratic response to the State of the Union, that's another dramatic turn — Stacey Abrams, the gubernatorial candidate from Georgia who lost to Republican Brian Kemp in the 2018 election, will be doing the honors.

Senate Minority Leader Chuck Schumer confirmed to CNN that he'd asked Abrams to give the address a few weeks ago, and on Jan. 29, she confirmed: "At a moment when our nation needs to hear from leaders who can unite for a common purpose, I am honored to be delivering the Democratic State of the Union response," Abrams wrote in a tweet Tuesday.

Typically, a member of Congress or another office holder from the opposing party will give a rebuttal to the president's official address to the joint session of Congress. For the 2018 address, Rep. Joe Kennedy III was the party's chosen spokesperson for the job. Though Cardi B had said she'd be up for the task after Stephen Colbert suggested she give the rebuttal, the Democratic party apparently went with another big name.

Abrams was boosted into national focus during the 2018 campaign with the prospect of potentially becoming the first black woman governor. She and her opponent Kemp had their own dramatic fight in the race last fall, after Abrams accused Kemp of fraudulent activity in the election, which Kemp denied. Kemp, who was running for the seat while acting as Secretary of State, was also criticized for being tasked with refereeing his own election. Abrams and Kemp came to be iconic partisan figures in the highly contentious fight in the midterms. Since then, she's been a household name and been regarded as an up-and-coming star in the Democratic party.

This will be only Trump's second State of the Union speech, technically, as his 2017 address wasn't an official State of the Union event. But this year's event has been the subject of more than usual excitement, and even the date has gone through some revisions. On Jan. 3, Speaker of the House Nancy Pelosi initially invited Trump to give the address on Tuesday, Jan. 29. But on Jan. 16, in light of the partial government shutdown, Pelosi uninvited Trump from making his speech on the intended day, citing security concerns. Trump then upped the ante by pulling the plug on plans to use military planes for a scheduled trip for Pelosi and other Democrats who were going abroad for a military oversight expedition, leading the trip to ultimately be canceled.

All of this was happening as the longest shutdown in modern U.S. history was continuing. The shutdown finally ended on Friday, Jan. 25 when Trump and his counterparts in Congress passed a short-term bill to reopen the government while appropriations lawmakers continue to hash out funding for border security. On Monday, Jan. 28, after the shutdown had ended, Pelosi sent another letter to Trump offering to have him speak on Tuesday, Feb. 5, which he accepted.

With all the contention that has circulated around Washington the last few weeks, it's a big deal that Democrats have chosen Abrams to speak for the party in response to the president. Aside from her political power, it's a bold step regardless — breaking representation barriers with her Tuesday appearance. The honor has traditionally been bestowed to office-holding men, and Abrams will likely be the first black woman to give the response, a Senate archives document suggests, though not the first woman of color to do so. In any case, be sure to get your popcorn ready for the big night.