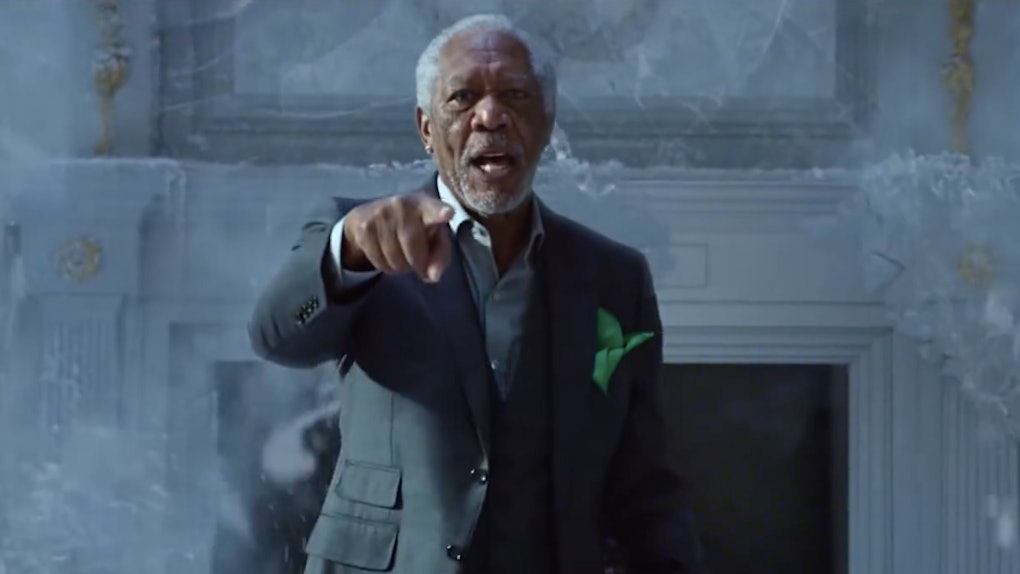 Who's Rapping In The Mountain Dew Ice Commercial? Morgan Freeman Is A Star Lip-Syncer

Super Bowl LII is just a few days away and the competition is already heating up big time — and I'm not talking about the matchup between the Philadelphia Eagles and the New England Patriots. I'm talking about the rap battle to end all rap battles taking place in a PepsiCo commercial set to air — when else? — during the game. The 60-second spot pits the new flavors of Doritos and Mountain Dew against each other, and it features Game of Thrones star Peter Dinklage coming in hot for Doritos Blaze. If you're wondering who's rapping for Mountain Dew Ice, lemme just say Morgan Freeman is cold AF and ready to get his freak on.

The spot starts off with Dinklage chomping on the spicy chips and breathing fire as he struts down a blaze-filled hall while lip-syncing to Busta Rhyme's verse in the Chris Brown song “Look at Me Now.” And yes, Busta shows up for a hot sec, too, via an animated picture hanging on the wall. But just when the purple bag of Doritos finally appears and a voiceover comes on, signaling what should have been the end of the ad, the screen suddenly swipes left to reveal Academy Award-winning actor Morgan Freeman sporting a frosty, white beard clutching a bottle of Mountain Dew Ice.

The Shawshank star twists the cap and boldly guzzles the stuff down, then starts spewing the lyrics to Missy Elliott’s “Get Ur Freak On,” while the furniture freezes up around him and giant icicles fall from the ceiling. It's all very Heat Mizer v. Snow Mizer firing insults at each from their respective clouds, and I am actually kind of living for it.

I mean, who knew either of these guys could even rap? Dinklage has the harder job here in my opinion, thanks to Busta's rapid fire lyric delivery that amps up the degree of difficulty. But his sync is as spot-on as his mad-as-hell death stare. Freeman is giving killer "Winter is Coming" vibes, and he is basically a straight-up ice cold star as he raps along with Missy. Missy herself is a scene-stealer if I ever saw one, slaying the game in her crystallized snow queen costume and frosty green lips.

"I am a drinker of Mountain Dew for real for real, actually," Elliot told Entertainment Weekly. "And when they said who the players were, I was like, how can you turn down something so epic? When you think about Morgan and Peter rhyming, it’s historical in itself. And Busta is like family to me. So yeah, I immediately said yeah."

I SO don't blame her. This spot is all kinds of epic, so I'm gonna go ahead and give it my vote for the best Super Bowl commercial of the year — and yes, I know the game hasn't even aired yet but I am just that confident, OK?

As for who won this thing, I think both raps are straight fire, so big ups all around. But you can go ahead and judge for yourself when the commercial makes its debut sometime during the first half of the game. Oh, and you're going to want to hit up Snapchat, too, because as part of the whole Doritos Blaze v. Mountain Dew Ice battle, the brands will run an exclusive Snapchat lens on Super Bowl Sunday that lets all of us mere mortals record ourselves getting our lip sync on to Missy and Busta.

If you're now more excited to try that thing out than you are to watch the actual game, well, then, I don't really blame you.