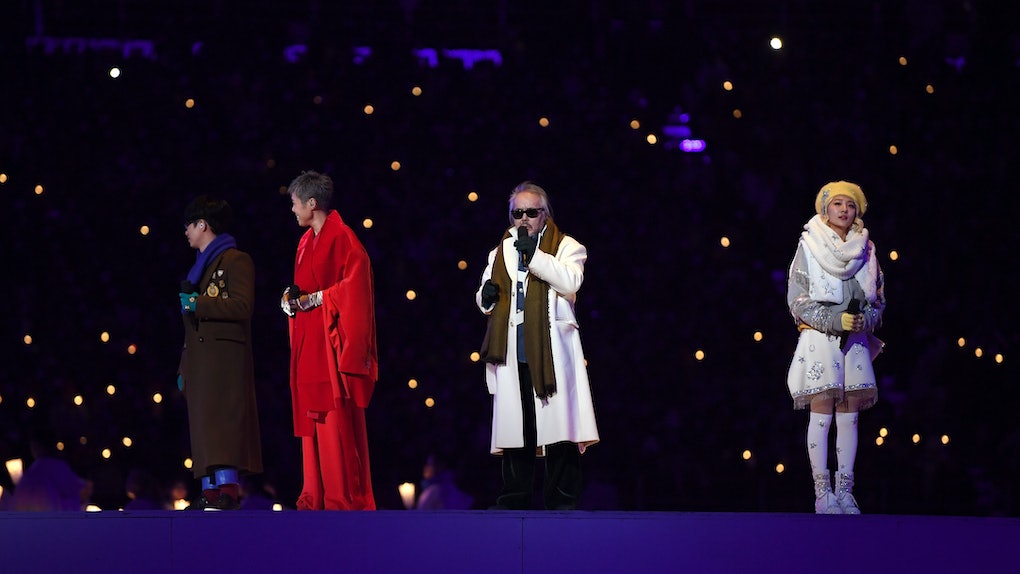 Who Sang "Imagine" At The 2018 Olympic Opening Ceremony? Korean Singers Performed The Rendition

During the PyeongChang Olympics' opening event, viewers were treated to a performance of John Lennon's classic song, "Imagine." The rendition wasn't performed by a single musician, however. So, who sang "Imagine" at the 2018 Olympics opening ceremony? The duty was shared by four Korean musical artists. The group of four was comprised of singers Ha Hyun-woo, Jeon In-kwon, Lee Eun Mi, and Ahn Ji Young.

Ha Hyun-woo is the 36-year-old lead singer of a Korean rock band, Guckkasten. Jeon In-Kwon, 63, serves as lead singer of another Korean band, Deulgukhwa. Lee Eun mi is a 51-year-old solo artist, while 22-year-old Ahn Ji-young is one half of the K-pop duo Bolbbalgan4.

The performance of Lennon's "Imagine," one of the most famous songs that emphasize world harmony and idealism, fit the theme of the PyeongChang Olympics' opening ceremony, "Peace in Motion." Before the four Korean artists delivered the rendition, International Olympic Committee (IOC) president Thomas Bach provided remarks that alluded to the theme.

"Dear athletes, now, it’s your turn!" Bach said. "This will be the competition of your life. Over the next days, the world will be looking to you for inspiration. You will inspire us all to live together in peace and harmony despite all our differences. You will inspire us by competing for the highest honor in the Olympic spirit of excellence, respect and fair play."

Also underlining the "Peace in Motion" theme was the unification of North and South Korea during the Parade of Nations. Instead of walking under their respective flags, athletes from the Democratic People's Republic of Korea (North) and the Republic of Korea (South) marched together while carrying white flags that featured the shape of the Korean peninsula.

The use of a "unification flag" is just one of many gestures of goodwill that both North and South Korea have agreed to in the weeks leading up to the PyeongChang Olympics.

Among the other gestures? South Korea's women's hockey team has been joined by 12 North Korean players, and the team will compete as a unified Korea. The coach of the team is a 29-year-old American and two-time collegiate champion, Sarah Murray.

Murray, the daughter of a former NHL coach, now oversees a situation in which she is directing a group of players who do not know each other and won't be residing with each other, either, during the Winter Olympics' tournament, which is arguably the most high profile international hockey competition in the world.

"In an ideal world, yes, we would be in the same building and we would stay together," Murray told The Los Angeles Times. "We're one team, but, unfortunately, it didn't work out that way. So we're just going to deal with it."

As the four Korean artists performed John Lennon's classic at the PyeongChang Olympic stadium, the sister of North Korean Kim Jong-un, Kim Yo Jong, was among the many distinguished guests at the opening ceremony.

Kim Yo Jong is the first member of her family's dynasty to visit South Korea in over 60 years, which highlights how the 2018 Winter Olympics have been used as an opportunity increase dialogue between two nations that have been at odds since World War II.

Seated in the same section as Kim Yo Jong (who was dressed in black, with a blue lanyard around her neck), just a row ahead, was Vice President Mike Pence, who has continuously restated the United States' opposition to Kim Jong-un's regime as the two Koreas hold more and more diplomatic talks.

At the opening ceremony, Kim Yo Jong shook hands with South Korean president Moon Jae-in. Pence did not interact with her, however.

Ahead of arriving in South Korea, the vice president expressed that he was on a mission to counter any image of agreeableness that North Korea would project.

I'm traveling to the Olympics with my wife and with our delegation certainly to cheer on American athletes, but also quite frankly we're traveling to the Olympics to make sure that North Korea doesn't use the powerful symbolism and the backdrop of the Winter Olympics to paper over the truth about their regime — a regime that oppresses its own people, a regime that threatens nations around the world, a regime that continues its headlong rush to develop nuclear weapons and ballistic missiles and uses those to threaten its neighbors and even threaten the United States of America.

Upon arriving in South Korea, Vice President Pence met with a group of North Korean defectors, who shared stories of torture and mistreatment at the hands of Kim Jong-un's regime. One of the defectors shared an embrace with Fred Warmbier, the father of Otto Warmbier, who died at 22 years of age, just days after being returned to the United States from North Korean captivity.

That's the backdrop against which "Imagine" was performed: a ceremony in which in which the two Koreas made a superficial show of unity, while a prominent American government official kept his distance.