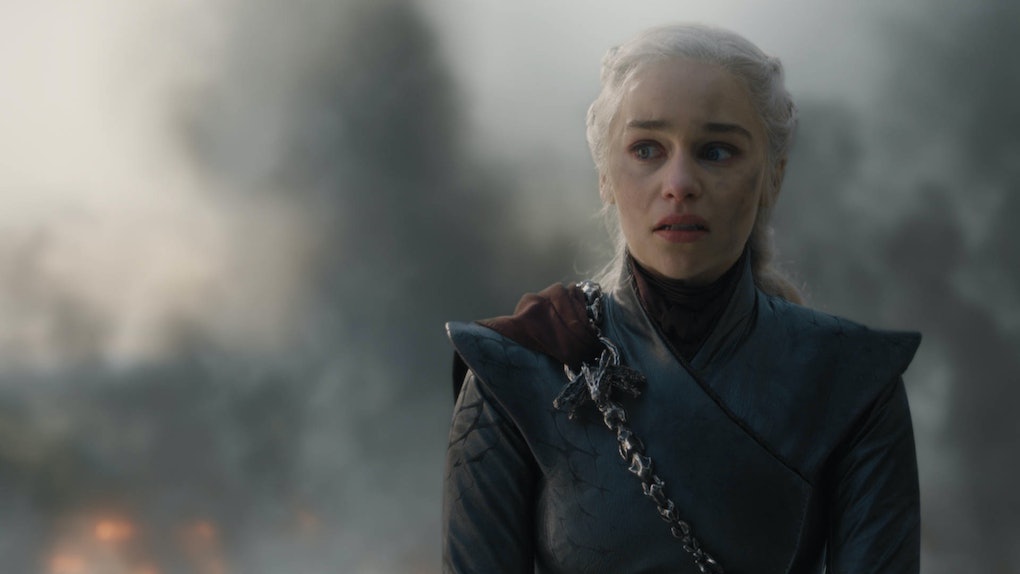 Who Rang The Bells On 'Game Of Thrones'? Dany's Madness Was Triggered In King's Landing

It was the shocking moment of Game of Thrones' penultimate episode, "The Bells," when Daenerys suddenly began to have Drogon firebomb King's Landing, street by street. For fans who assumed the Battle of King's Landing would result in a Daenerys victory, it seemed like it came out of nowhere. As everyone thought, the mere threat of her dragon was enough to stages an almost bloodless coup. Instead, the surrender bells rang, and the Mother of Dragons went mad. But who rang the bells on Game Of Thrones?

It's not an incorrect assumption on the part of fans to think the two were related. There was Daenerys, far above the city, staring at the Red Keep when all the bells began to ring, a signal by the Lannister Army they surrendered. Her face twisted, her eyes registered distress. Then, with a look of determination she rose into the air. In the words of her father, Mad King Aerys, she began to burn them all.

Drogon's fire wasn't the only thing burning King's Landing either. The residual heat was enough the stores of wildfire, which rumor had it Aerys had buried around the city, were ignited. Turns out Cersei and Tyrion hadn't used all of it. All the sacrifices made to keep Aerys from setting them off wasn't enough to stop his daughter from doing the same.

But were the bells to blame?

Game of Thrones seems like it moves in mysterious ways. But the novels have a formula to them, especially in shock turns like Ned death or the Red Wedding. Couched in the first-person POV, every action taken by the character makes sense, at least from their perspective. Daenerys would have been better served to narrate her thought process. Instead, like "Stupid Ned Stark" or Jon knowing nothing, from the third person perspective of television, it just looks like irrational, bad choices.

But according to the Inside the Episode segment, where the showrunners discuss this scene, she didn't go mad.

Daenerys has lost nearly everything because she listened to Tyrion and Varys, who told her these are the rules you play by when you play the game of the thrones. The reason Cersei has won, every time, is she does not play by the rules. She chooses violence. Margaery caught onto it in the Sept. Her fatal mistake was assuming her opponent would follow all the social norms and niceties women used to play the game.

Cersei did not. Instead, she blew up the board.

Cersei wins because she's willing to take it farther than you, every time.

As the bells rang, Daenerys decided this was a trap. If she followed the rules of engagement and accepted the sign of surrender, Cersei would be taken prisoner. That meant she'd still be alive and willing to blow up the board again.

Daenerys couldn't allow that. She had to show everyone who discounted her, from the Tormunds in the world who credited Jon Snow with dragon flying (when she'd been doing it for years) to the Varys of the world who thought they could take her down with their webs of intrigue that she was willing to take it farther than Cersei. She had to show she could break the wheel, blow up the board. She would burn them all.