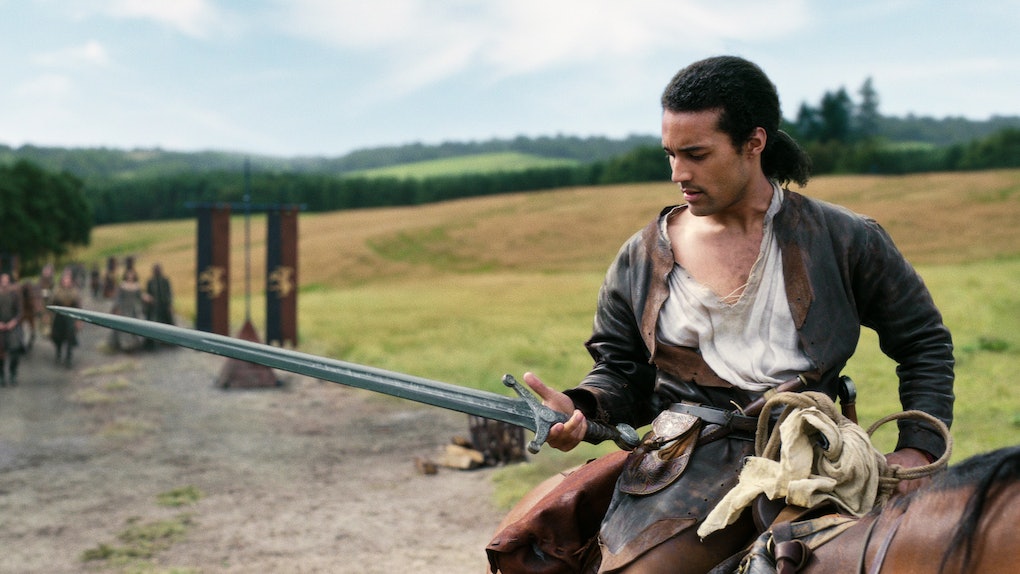 Who Plays Arthur In 'Cursed'? Devon Terrell May Look Familiar

Cursed's concept is one of the cleverer variations on the legend of King Arthur and his knights. The story, which is one of the oldest fantasy myths in the Western canon, is a male-dominant, Christianized tale. Women are reduced to unfaithful love interests like Guinevere or mystical silent apparitions like Nimue the Lady of the Lake. Cursed turns all that on its head, starring Nimue as the one chosen by the sword to lead her Fey people to fight for their survival. But that doesn't mean you shouldn't pay attention to Arthur in Cursed, nor the actor who plays him.

Warning: Spoilers for Cursed Season 1 follow. When Nimue (Katherine Langford) first meets Arthur, she's just been thwarted on her way out of town, having missed the boat to go on adventures. He's a cute guy, but a bit of a self aggrandizer. But at least he apologizes when the knight he's working for attempts to have Nimue arrested for her Fey abilities, and he travels alongside her on her way home.

Nimue is lucky he does, because upon arriving back in her village, she finds it under attack by Red Paladins — her mother dying, her home gone. She soon meets Arthur again, carrying the Sword of the First Kings her mother bestowed on her to take to Merlin, which seems to have chosen her as its mistress. Arthur steals away the sword in the night to use for a tourney, but soon finds his way back to Nimue, returning what's hers.

Considering Arthur's undeniable charm, fans might wonder who would take this role, which soon turns into the hero role's stereotypical romantic interest. (There's an episode in which Arthur runs around after her, helplessly shouting, "Nimue! Nimue!" for almost the entire hour.) The answer to this burning question is: Devon Terrell who fans of Netflix just might recognize.

Terrell was introduced to viewers in Barry, Netflix's deep dive into the college years of U.S. President Barack Obama. His other two significant roles came in 2018: one in Ophelia, a gender-flipped take on Shakespeare's Hamlet starring Daisy Ridley, and the other in Johnny Depp's The Professor.

Terrell's Arthur does eventually become a hero, standing in his own right by the end of the season. He leads Nimue's armies to fight against the Viking invaders who have teamed up with the Red Paladins to wipe out the Fey. But like any good romantic figure, he's faithful to Nimue, leading only in her name. (Even if some of that leadership has him eyeballing a badass Viking rebel named Guinevere.)

As Cursed ends on a cliffhanger, with fans wondering whether Nimue is alive or dead, Arthur looms large. Will he find a way to rescue her? Or will he take the sword for himself and attempt to follow history?

Season 1 of Cursed is on Netflix now.

More like this
Who Plays Mal In 'Shadow And Bone'? You May Have Seen Archie Renaux Before
By Abby Monteil
This 'Stranger Things 4' Theory About Eleven's Past Is Super Dark
By Ani Bundel
Is Jesper A Grisha In 'Shadow And Bone'? This Tiny Detail Could Be A Hint
By Dylan Kickham
Stay up to date