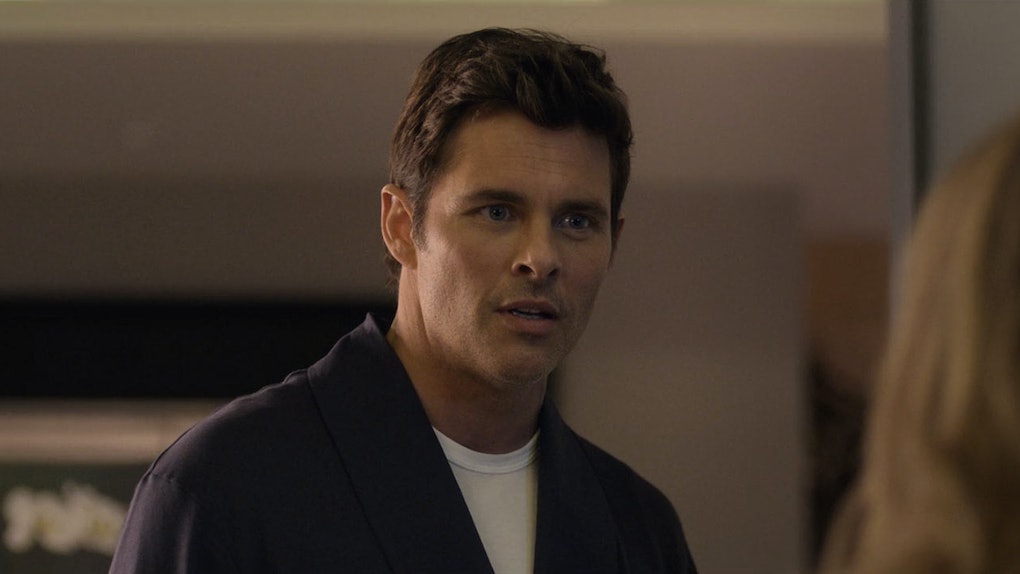 Who Killed Steve On 'Dead To Me'? 5 Fan Theories To Hold You Over

There's only one thing better than a TV season that ends with a cliffhanger, and that's a cliffhanger that's a mystery. That's exactly what fans got with the ending of Dead to Me Season 1. The Netflix dark comedy was filled with twists and turns as Jen (Christina Applegate) dealt with the death of her husband by a hit-and-run driver alongside her new friend Judy (Linda Cardellini). But, there was no bigger twist than the last moments of the Season 1 finale, which showed Judy's ex-fiancé Steve (James Marsden) dead in Jen's pool. So, who killed Steve on Dead to Me? Fans have a bunch of theories to hold you over until Season 2 premieres. Warning: Spoilers for Season 1 of Dead to Me follow.

At the end of Season 1, Steve is harassing Jen in her backyard, while Jen points a gun at him and tells him to leave. The next scene shows Jen inviting Judy over, before the entire season ends with the reveal of Steve dead in the pool. At first glance, it seems like Jen is Steve's murderer, but creator Liz Feldman has said that the killer's identity will be a surprise. "I’ll just say that you don’t know that she shot him,” Feldman told The Hollywood Reporter. "It’s not exactly what you think it’s going to be."

Fans have a few different theories for who might have killed Steve. But the truth is that on a show as consistently shocking as Dead to Me, it truly could be anyone.

At the end of Season 1, Jen's son Charlie returned home after living with his grandmother. There's a possibility that he came back just in time to see the confrontation and take down Steve. Reddit user MIguy68 says:

Charlie clocked him in the head with a baseball bat or gold club, killing him. Could be that he did it because he thought he was protecting his mom from danger, or maybe he overheard the conversation and was lashing out at the guy who was there when his dad was killed.

Jen's older son would probably be more capable of committing a murder. But Reddit user mlosty1 thinks that audiences are in for an even bigger twist with Jen's younger son being the killer:

I think we’ll be led to believe it was Charlie (he stole his grandmothers gun) but it’s really Henry who they’re protecting. Maybe because Steve was actually leaving when he left so they can’t use the “he refused to leave” excuse.

Charlie returned to Jen's home the night of the murder after staying at his grandmother Lorna's house. There's a possibility that Lorna dropped him off, but during the drop-off Lorna heard the confrontation and rushed to help. Reddit user doglover33510 says, "What if it was Lorna who shot him? Assuming Charlie got dropped off by her? We already know she is pro-gun."

This one's kind of random, but it makes a lot of sense. Jen's neighbor Karen (aka the lady who gives her a Mexican lasagna) is the first character fans see Jen interact with, so it would bring the season full circle for her to be responsible for the biggest moment at the end. Reddit user maryssmith lays out a bunch of evidence to back up this idea, including this fact:

Karen, being the security nut that she is, would have just come back from Jen's not that long ago before she heard the massively loud alarm go off, triggered by Charlie when, unaware of the systems, he tripped them coming home. Let's say that Karen then gets one of her guns and creeps over to Jen's to check on her and winds up witnessing the interaction between Steve and Jen. Just as Steve is about to try to get the gun away from Jen, Karen fires. She shoots Steve in the back and he falls face-first into the pool.

Throughout much of the season, audiences hear about how Steve got caught up in a money-laundering scheme involving the Greeks. There's a chance that his murder has nothing to do with his confrontation with Jen, and instead he was taken down by his Greek enemies. Reddit user AnonRetro explains:

We also saw him take an angry phone call from the Greeks. He was laundering money, a lot of money. They would be quite mad at not only the loss of money, but also the exposure since all the files where taken. It is quite possible that she did not shoot him. That he was snipped just before she had a chance to pull the trigger. This also explains why no one in the house woke up, and she had time to call Judy over without worry of local commotion from a loud bang.

Dead to Me will have a Season 2, but its release date hasn't been announced yet. Until then, fans can continue to theorize about Steve's killer.

More like this
What Happened To The Rose Family After 'Schitt’s Creek'? 6 Theories
By Rachel Varina
Who Is Cleo On 'Outer Banks'? Carlacia Grant Is New To Season 2
By Ani Bundel
Shonda Rhimes' Quote About Regé-Jean Page Leaving 'Bridgerton' Is SO Shonda
By Rachel Varina
Stay up to date