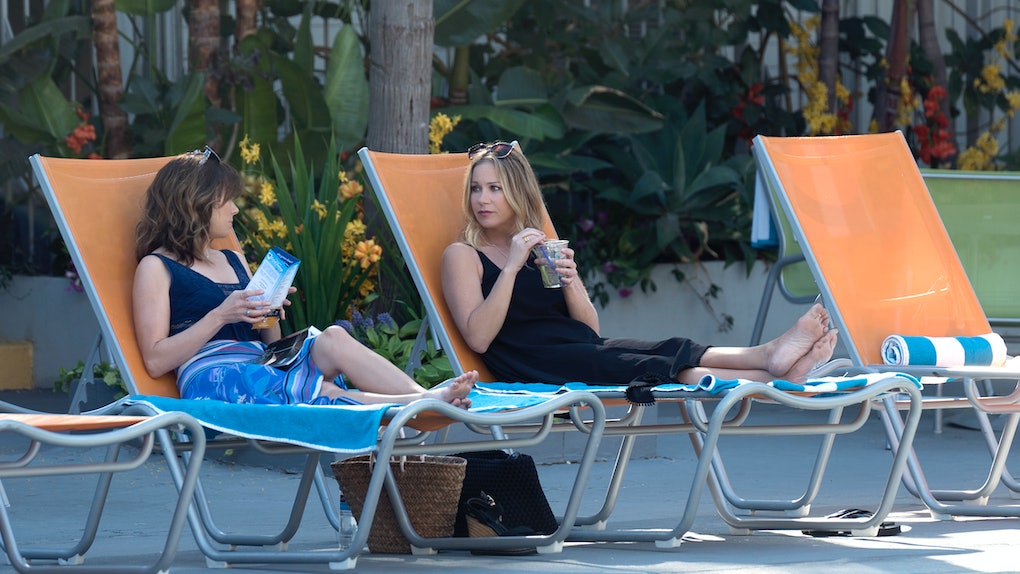 Every once in a while, there's a series that's so addictive, you accidentally binge through the whole thing in one sitting. It's both a blessing and a curse. On the one hand, it's wonderful to have a show that's so good you devour it all at once. On the other hand, when you gobble up a show that quickly, then you're left with nothing to watch very quickly. For a lot of fans, Netflix's Dead to Me is exactly that kind of show. Luckily, the dramedy was renewed for a second season, so eventually there will be more of it to watch. But, the next installment won't be out until 2020, so audiences will still have to wait a little while. But, that doesn't mean you can imagine what might happen in the next batch of episodes with some juicy Dead to Me Season 2 theories. Warning: Spoilers for Season 1 of Dead to Me follow.

Season 1 of Dead to Me was filled with twists at every turn. From Judy's (Linda Cardellini) secret that she was driving the car that killed Jen's (Christina Applegate) husband, to the reveal that Jen's husband had been having an affair, there were plenty of surprises to keep audiences hooked. Season 1 ended on perhaps the biggest twist of all: Judy's ex-fiancé Steve (James Marsden) dead in Jen's pool. Season 2 will hopefully pick up right where Season 1 left off. But until the show gives fans answers, there are these theories to hold you over.

The last time audiences see Steve alive, Jen is pointing a gun at him. So the obvious answer to "who killed Steve" is Jen. But what if her son rushed to her rescue? He could have done it with his grandmother's stolen gun, or with another more rudimentary weapon. Reddit user MIguy68 has a theory:

Jen did not shoot Steve, I’m sure of that. [...] Charlie clocked him in the head with a baseball bat or gold club, killing him. Could be that he did it because he thought he was protecting his mom from danger, or maybe he overheard the conversation and was lashing out at the guy who was there when his dad was killed.

While it might make a little more sense for the older of Jen's kids to do the deed, Reddit user mlosty1 thinks that actually her younger son did it. He does show that he has a temper in Season 1, so maybe he let that temper out on Steve. Here's the theory:

I think one of the boys came out and attacked him and that’s why Jen called Judy back. They need to hide a secret for the boys. I think we’ll be led to believe it was Charlie (he stole his grandmothers gun) but it’s really Henry who they’re protecting. Maybe because Steve was actually leaving when he left so they can’t use the “he refused to leave” excuse.

3. Judy And Steve Were On Their Way To The Hospital Because Of A Miscarriage The Night Of The Car Accident

Reddit user Electrapink1 thinks that Judy caused the hit and run accident because she was distracted by her own tragedy:

In Season 1, Nick tells Judy that his partner was killed on the job and that he's taken a psychological leave from work because of it. But, perhaps Nick is feeling the psychological effects of that loss extra hard because he's the cause of it. Reddit user highzenberrg says:

Did Nick kill his partner accidentally? He made it seem like it was a gun that went off. [But when the] detective was talking to him he was put on leave because of psychological reasons when the whole time it seemed like he put himself on leave.

A lot of fans have noticed that every time Steve apologizes, Judy says "it's okay" in the same tone. It's a little eery, so much so that some people think it's part of Steve brainwashing her.

In fact, some fans even believe that Steve was actually behind the wheel the night of the accident, and that he's convinced Judy that it was her fault.

The release date for Season 2 hasn't been announced yet, so fans have plenty of time mull over all the possible answers to Dead to Me's many questions.