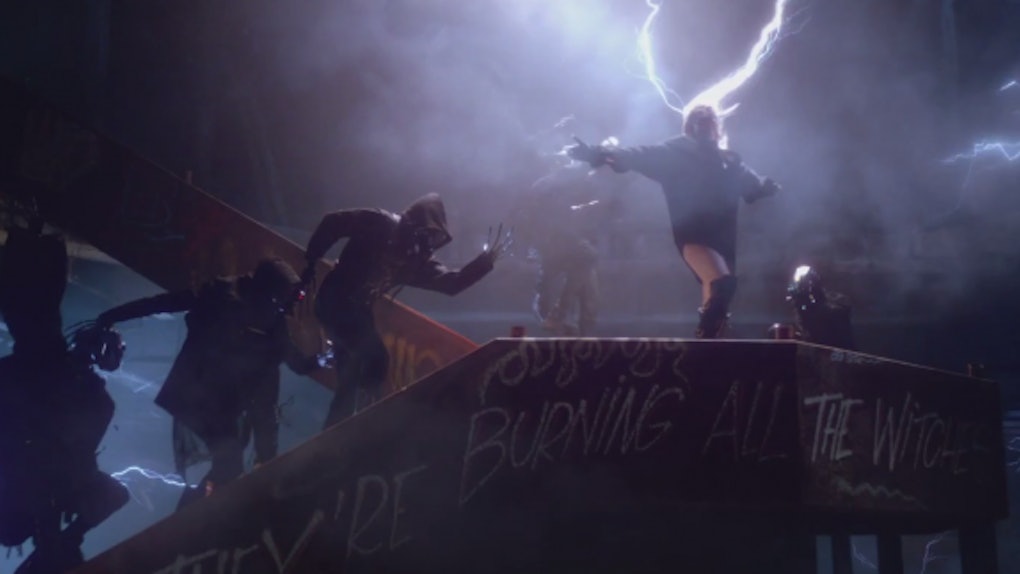 Who Is "They're Burning All The Witches" About? Taylor Swift's New Song Has Cryptic Meaning

Taylor Swift's Reputation is coming out in just 10 days, and fans are impatiently waiting for the arrival of the singer's sixth studio album and second pop album. Since the release of single and music video for "Look What You Made Me Do," Swift has released two other songs, "...Ready For It?" and "Gorgeous," and one music video for "...Ready For It?" The "...Ready For It?" music video drew lots of attention — and of course, fan theories — when it released last Thursday, Oct. 26. There was one shot that has fans particularly wondering: who is "they're burning all the witches" about?

Near the end of the music video, hooded cyborg Taylor sacrifices herself to a group of attackers while standing on top of a platform that reads, "They're burning all the witches." According to a fan theory, hooded cyborg Taylor is thought to be sacrificing herself so the other Taylor (the one who spends most of the video in that glass box) can escape captivity now that she's "ready." Fans are taking this as a metaphor for Swift being trapped by the way she's portrayed in the media, and the hooded cyborg Taylor is setting the other Taylor free to finally be herself. Swift recently liked a Tumblr post describing this theory, which fans are taking as confirmation of her intentions with the video.

taylor’s standing on something that says 'they’re burning all the witches' and I’m assuming this is a reference to the salem witch trials in the sense that powerful and outspoken women are feared and hunted down. Taylor is a powerful woman who has spent her entire career being demonized by the media— basically, there’s been a witch hunt for her, and her actions/mistakes are heavily scrutinized mostly on the basis that she is a woman. The media also spins this narrative that she has this 'witchy' effect on men ('stealing hearts and running off and never saying sorry'). Basically, I’m pretty sure this video is showing that aspect of her 'reputation', and calling out the media/society for trying to tear down and undercut the success of powerful women. And I’m so here for it.

According to this fan (and many others... and also her album cover), Swift's Reputation will be calling out how she's been lied about in the media throughout her entire career. Fans of Swift love this concept, but there are those who think it's a poorly timed narrative, considering the fact that the President of the United States actively tries to discredit the media. Has Taylor Swift been the victim of sexist scrutiny in the music/entertainment industry/pop culture in general? Yes, without a doubt. She and other successful women throughout history have been (and unfortunately will most likely continue to be) scrutinized and discredited solely because they are women. But that does mean all of the criticism about her in the media over the years has been unwarranted? Sorry, fam, but nah.

Anyway, the director of both the "...Ready For It?" and "Bad Blood" music videos, Joseph Kahn, touched on this witch theory in a series of tweets on Oct. 22, a couple of days before the "... Ready For It?" music video dropped.

In his tweets, he said people love to try and take down powerful women. His tweets read,

Society is tougher on girls through critical generalizations, mostly through the cultural dismissal of female intelligence as manipulation.

I think females have empathy superpower that men often lack. So when you combine natural empathy with intelligence, it scares a lot of men.

Fans were shook by this.

In a tweet from Oct. 27, the day after the "...Ready For It?" music dropped, he tweeted again about people wanting to take down powerful women.

He said, "We have short memories of how the media love to tear women down in their prime. Britney, Madonna, Janet, Mariah, etc. We feed the beast." Although he didn't flat-out say this was about Swift, it's safe to assume it was.

Fans think Reputation is going to be a visual album that begins with "...Ready For It?" and tells the story of how Taylor Swift is deciding to "break free" of this "reputation" the media has made for her, so we'll have to see if that theory holds up come Nov. 10.