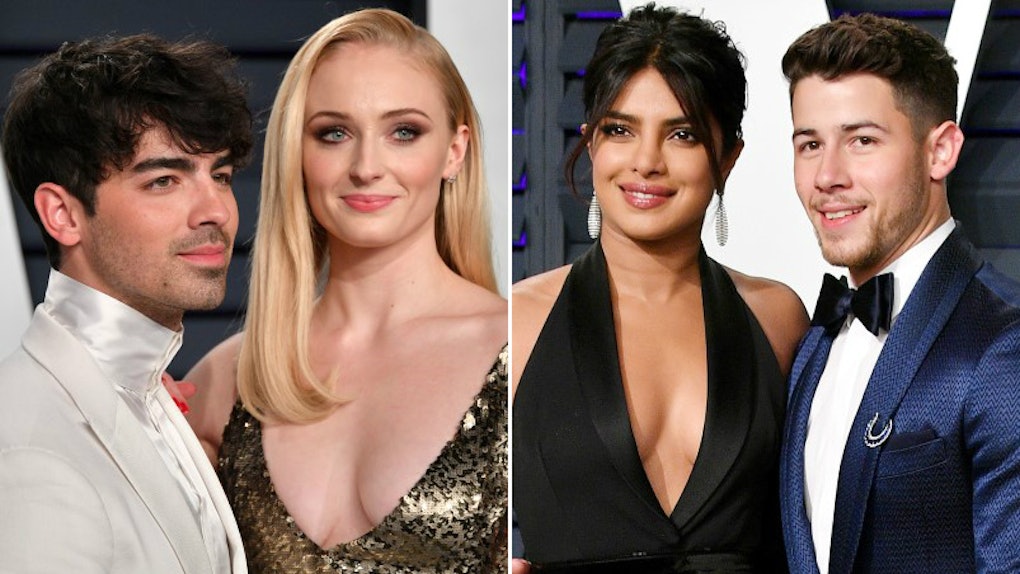 Who Is The Jonas Brothers' "Sucker" About? Priyanka, Sophie, & Danielle Are Muses

The Jonas Brother just released their first single nearly six years of going solo and fans everywhere are going wild over it! The song, entitled “Sucker,” delves deep into what it takes to make a relationship spark, and the guys basically sing their hearts out on the track. The lyrics to the song are all about love and how that love has the power to totally transform someone. And that has fans thinking that the Jonas Brothers are singing about their own love lives. Who is The Jonas Brothers' "Sucker" about? Well, given that their actual wives star in the video, it's probably definitely about them!

So, before I get into the guys’ love lives, let me tell you a little about the song first. As I mentioned, it’s called “Sucker” and it’s all about love.

Here’s a look at the lyrics to the chorus:

The guys already released the video, which you can check out down below. Plus, it stars all their wives, so it's gotta be about them, right?

All right, now that you've watched all that, what do you think?

The song is definitely a shoutout to their loves! It has to be. How could it not be? One thing’s for sure, though: these guys are not shy about letting everyone know how much they love their partners in crime!

So, let’s get into the Jonas Brothers’ love lives for a second, just in case you're not quite yet convinced the song truly is inspired by the ladies they love.

As you probably know by now, Nick Jonas is married to the beautiful and talented Priyanka Chopra. There’s no question that these two are head over heels in love. I mean, look at them:

In early January 2019, Nick gushed about his wife to Entertainment Tonight:

It was kind of an instant thing. I knew once we locked in together that I had a partner for life and a teammate, someone I could walk through the good times and the bad times with, and that was the key. I’m blushing now!

I’d say the lyrics to “Sucker” are definitely in line with Nick’s sentiments!

As for Joe, he’s all tied up with actress Sophie Turner and the two are inseparable. Look how cute they are:

They got engaged in late 2017 and Turner had lots to say about it in her interview with Marie Claire in April 2018:

It's lovely to be engaged. Not like I achieved anything, but I found my person, like I'd find a house that I love and want to stay in forever. There's a sense of peace that comes with finding your person.

If Joe feels the same way (and why wouldn’t he?), then I’d bet anything he’s singing his part in “Sucker” just for her!

And lastly, there’s Kevin who has been married for nearly a decade to his wife, Danielle. I feel like their long-term commitment to each other is evidence enough that he’s singing “Sucker” for her. Love is real, y'all!