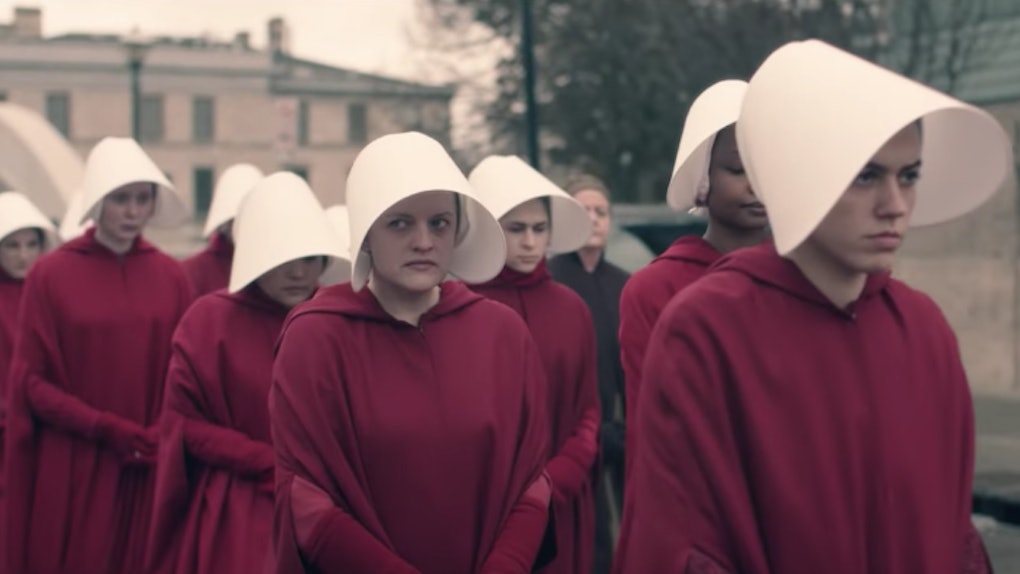 Who Is The Cast Of 'The Handmaid's Tale' Dating? They Have Relationships Outside Of Gilead

Season 3 of The Handmaid’s Tale premieres on Hulu on June 5, and fans are waiting with bated breath to see what will happen after the shocking Season 2 finale. Will June ever successfully escape from Gilead? Will Aunt Lydia survive after being stabbed? The future of these characters is unknown, but as for the cast… they’re a bit easier to follow. As for who the cast of The Handmaid's Tale is dating, that’s a story exciting enough to hold everyone over until the new season begins.

The series undoubtedly has an all-star cast, and it shows — The Handmaid’s Tale has received numerous awards since its first season dropped in April 2017. And with abortion rights under fire in a multitude of states in 2019, including Georgia and Alabama, the show feels more chillingly relevant than ever before. I can hardly wait to see what shocking plot twists Season 3 will bring, but until then, I wanted to learn more about the real lives of the cast members, when they’re not stuck under Gilead’s oppressive regime.

Thankfully, the IRL actors seem to have much happier love lives than their characters do. While not all of them are super open about their relationships, they’ve shared enough to give some fun insight into what their lives are really like. Here’s what they’re up to outside of The Handmaid’s Tale.

The Handmaid’s Tale and Mad Men star got married to actor and comedian Fred Armisen in October 2009. Eight months later, the couple split, citing irreconcilable differences. People reported at the time that conflicting work schedules put a strain on their relationship. Since her divorce from Armisen, Moss has kept her romantic life pretty private. In an April 2019 interview with Marie Claire, she admitted to having a partner, but declined to name them, saying she has learned “you just don’t talk about it.”

Bledel, who rose to fame for her portrayal of Rory Gilmore in Gilmore Girls from 2000 to 2007, is married to actor Vincent Kartheiser, known for his role as Pete Campbell on Mad Men. The couple started dating in 2012, according to Ranker, and got married in June 2014. They have one child together. Before dating Kartheiser, Bledel dated Gilmore Girls co-star Milo Ventimiglia from 2002 to 2006.

The hunky British actor has been making the news lately amidst rumors he might be dating Elle Fanning, whom he directed in the 2018 film Teen Spirit. They’ve both gushed about each other to the press, but neither will confirm whether they are an item. Minghella’s most famous ex is Kate Mara, whom he dated from 2010 to 2014.

Strahovski married actor Tim Loden in summer 2017 after eight years of dating. The couple first got together in 2009, and they’ve kept a fairly chill and happy profile ever since. In October 2018, they welcomed their first child together.

Fiennes is married to Maria Dolores Diéguez, a Swiss actor and model, since August 2009. The couple has two daughters together.

Back in January 2018, Brewer sent the internet into a frenzy when she was spotted eating dinner with Nick Jonas in Santa Monica (this is before Jonas started dating Priyanka Chopra in May 2018). When asked about the dinner, Brewer said she and Jonas were "friends," effectively shutting down any rumors of a romance. She hasn't been linked to anyone since then.

Wiley, who appeared in Orange Is The New Black before landing her role as Moira in The Handmaid's Tale, is married to Lauren Morelli, a writer for OITNB. They met while working on the show together and started dating in 2014. They tied the knot in March 2017. Oh, and did I mention their wedding photos are stunning?

The cast's real-life relationships are a welcome departure from the distressing lives their characters live on our TV screens. As fans wait for Season 3 to begin, it's fun to get a glimpse into the lives of the stars and learn what they're up to IRL... outside of Gilead's borders.

More like this
10 'Gossip Girl' Actors Who Dated Each Other IRL
By Corinne Sullivan
Is Madison LeCroy Dating Whitney Sudler-Smith? Here's What Sources Say
By Candice Jalili
Clare Crawley's Tweet About Matt James Reportedly Dating Grace Amerling Is Shady
By Candice Jalili
Stay up to date