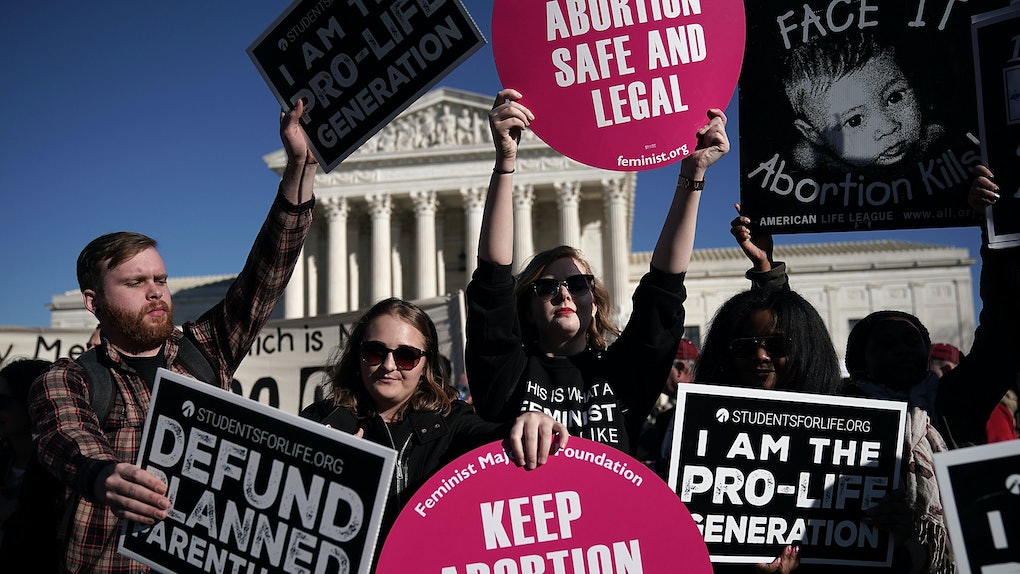 Did you hear? The Alabama state Senate voted on May 14 to pass one of the strictest abortion laws in the United States, sending the bill to Republican Gov. Kay Ivey's desk to be signed into law. In response to the measure, people took to Twitter to draw comparisons to a show that has become terrifyingly similar to American politics: The Handmaid's Tale. You've gotta get a load of the tweets about Alabama's abortion ban.

On Tuesday, Alabama's Senate passed the measure, which bans nearly all abortions in the state, with the only exception being if there's a risk to the mother's health. Under the bill, doctors who perform abortions can face anywhere between 10 years and 99 years in jail, although women would not be criminally liable. The bill is said to be a direct challenge to Roe v. Wade, the 1973 Supreme Court decision that establishes the right to an abortion. As of writing, Ivey has not publicly committed to signing the bill, but Republican lawmakers are expecting her support. A spokesperson for the governor, who has expressed anti-abortion views, said in a statement to The New York Times that she would “withhold comment until she has had a chance to thoroughly review the final version of the bill that passed.”

People quickly drew comparisons between the bill and the popular TV show, which was based on the novel by Margaret Atwood. The series takes place in a dystopian society called Gilead, which used to be the United States, in which women are subjugated to men, who take control over their reproductive ability and force them into sexual and reproductive slavery. Everyone knows that's supposed to be fiction, and bad, right??

"Who told #Alabama that #TheHandmaidsTale was a corporate training video?" one person tweeted.

"I feel like our nation is state-by-state turning into a real life version of #TheHandmaidsTale Women are losing the rights to their bodies," another tweet reads.

You could say it's the kind of thing you either laugh at or cry, but I don't know if anyone's laughing.

Stephanie Schriock, president of the pro-choice political action group EMILY’s List, said in a statement shared with Elite Daily via email on May 15 that the measure is regressive for women and a threat to their rights. "The threat against women's rights is not theoretical. It’s here, it’s real, and it has dire consequences for American women and families. We must act to protect women and their rights." She continued,

Stop these bans. Fight for better policies and for policymakers who stand by women and their families and not for a craven and backward Republican Party that ignores the vast majority of Americans and the United States Supreme Court.

Dr. Yashica Robinson, Board Member of Physicians for Reproductive Health, also says in a statement shared with Elite Daily that the measure is "inappropriate." It read in part,

It is inappropriate for lawmakers to insert their own belief systems into complex, personal health decisions that could affect my daughter and the people I take care of in Alabama.

Other abortion rights supporters say that they will be challenging the measure. The same day as the May 14 vote, the American Civil Liberties Union (ACLU) of Alabama vowed on Twitter to take legal action against the bill.

The national ACLU said in a statement to The New York Times that it will argue the state unlawfully restricted access to abortion.

"Passing bills that they know will be struck down in federal court are a waste of millions of taxpayer dollars that could be going to address the urgent needs in our communities," the statement reads. "Ignoring those needs in favor of scoring political points is an irresponsible use of their power and privilege."

With any luck, the outcome will be a little happier than The Handmaid's Tale. We'll see.