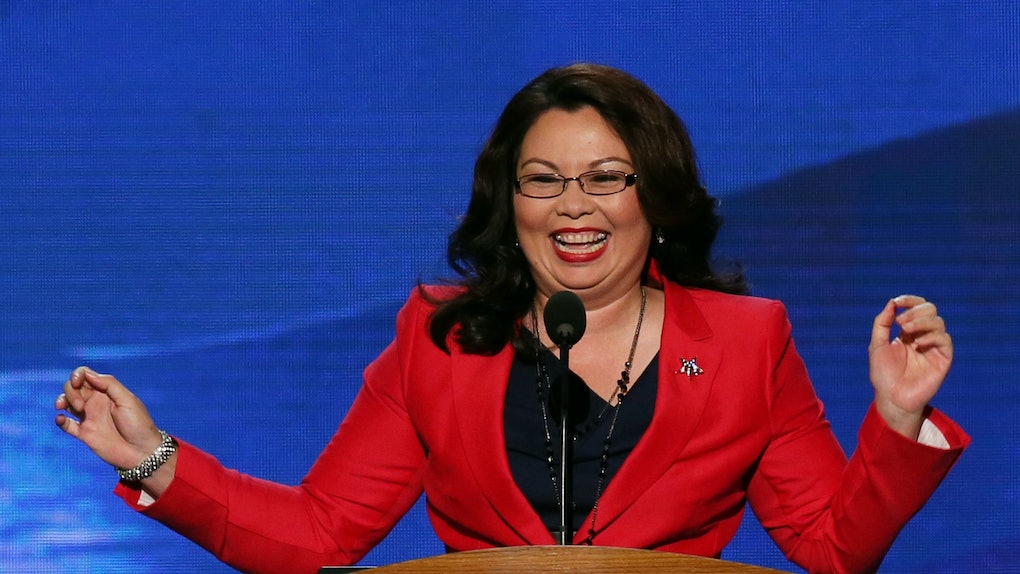 Who Is Senator Tammy Duckworth? Her Pregnancy Is Making History

On Tuesday, Jan. 23, Congress got some very exciting news. Senator Tammy Duckworth is pregnant, she confirmed to the Chicago Sun-Times. Duckworth, the Democratic senator representing Illinois, told the Sun-Times that she is just over six months pregnant with her second child. She is expecting to give birth in late April. When that happens, Duckworth will become the first sitting senator (i.e. person currently serving as a senator) ever to give birth.

Given how largely male Congress is, that statistic — sadly — is not entirely surprising. Right now, there are just 22 women serving as senators. Since there are 100 senators, that means that women, who make up one-half of the nation, make up less than one-quarter of the Senate. (So, uh, if you're wondering why things like women's health are so often pushed to the side in national politics... )

Duckworth's first child, Abigail, was born in November 2014. At that time, Duckworth was a member of the House of Representatives. According to the Chicago Sun-Times, a total of 10 members of Congress (Duckworth included) have given birth in office, but every other birth happened in the House, which has a larger number of members. So Duckworth's pregnancy really is notable.

Duckworth is an entirely notable politician regardless of what's happening in her uterus (it's true!). She served in the Illinois Army National Guard for 23 years and lost her legs when the Black Hawk helicopter she was in was shot down in Iraq in 2004. She was elected to the House in 2012 and to the Senate in 2016. Duckworth is the first (deep breath here) Asian-American woman elected to Congress in Illinois, member of Congress born in Thailand, disabled woman elected to the House, and female senator to have seen combat. She is the second Asian-American female senator. So yeah, breaking barriers is nothing new to her, to say the least.

In the House, Duckworth introduced the Friendly Airports for Mothers Act and the In the Red Act, which was a move toward debt-free college. She was part of the House Armed Services Committee and the House Oversight and Government Reform Committee. In the Senate, Duckworth has been working on progressive policies, taking a special look at infrastructure and jobs.

Duckworth has been vocal about the importance of women's health. In September 2015, during a congressional hearing on Planned Parenthood, then-Representative Duckworth discussed her experience with Planned Parenthood, which helped her when she needed a health exam to get a job in college.

Duckworth has also been a vocal advocate against any general ridiculousness coming from President Donald Trump. Just this past week, she went viral for saying, "I will not be lectured about what our military needs by a five-deferment draft dodger." This was in response to Trump claiming that Democrats were "holding our military hostage over their desire to have unchecked illegal immigration" (translation: Dems wouldn't vote for a spending bill, leading to a government shutdown, because they wanted a deal on DACA).

Duckworth, 49, told the Sun-Times that she and her husband, Bryan Bowlsbey, used IVF to conceive their first daughter, Abigail. Duckworth then had to wait 18 months after giving birth to Abigail to try to get pregnant again. One of the later attempts resulted in a miscarriage in 2016, during her campaign for the Senate, and she said that ultimately getting pregnant this time was "a struggle." Now, however, she told the paper that she feels "great."

"Parenthood isn't just a women's issue, it's an economic issue and an issue that affects all parents — men and women alike," Duckworth said in a statement on Tuesday. "As tough as juggling the demands of motherhood and being a senator can be, I'm hardly alone or unique as a working parent, and Abigail has only made me more committed to doing my job and standing up for hardworking families everywhere."

It's a pretty remarkable time to have this bit of history happen. Duckworth is a pregnant woman in the Senate under an administration and a Republican-majority Congress that has repeatedly worked to limit women's access to basic health care, including the full range of reproductive services. The Trump administration has worked to limit women's access to birth control (which Duckworth called "utterly shameless") and re-instituted the Global Gag Rule (which Duckworth co-sponsored a bill to repeal), which hurts women abroad in targeting providers of safe abortion services. The Republican Congress, meanwhile, attempted to pass a new health care bill that would hugely impact women's access to care (which Duckworth was against), and versions of their tax bill would have as well (again, which Duckworth was against).

Having women in Congress means having women's voices in Congress. It means that women are not completely overlooked or pushed aside, because they are there; they have a seat. Tammy Duckworth has a seat, and that seat is important, and she is using it to support women (which, in turn, supports the whole country). Her children will grow up knowing that women — and their reproductive choices — belong in seats of power. And that is remarkable.

More like this
These Tweets About The Bidens' Photo With The Carters Ask A LOT Of Questions
By Rhyma Castillo
5 Women & Femmes Working To Destigmatize Sex Work On Instagram
By Caroline Colvin
These Songs About Friendship Between Women Are Empowering AF
By Sydney N. Sweeney
Stay up to date