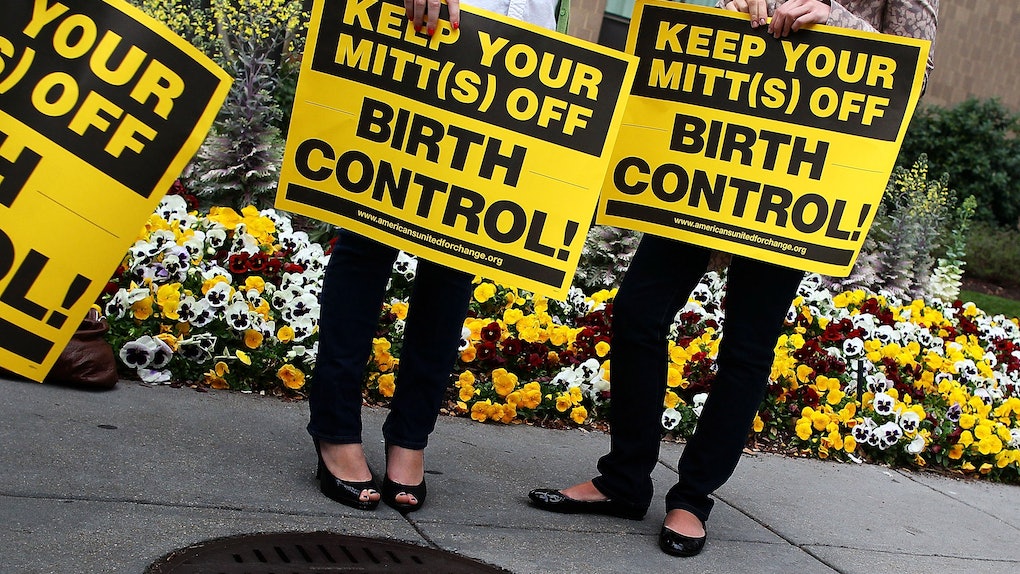 If you thought the health care debate was finally done, we hate to break it to you, but it's far from over. Early on Dec. 2, the Senate passed its version of the bill to overhaul the nation's tax code, and it does more than just determine how much you owe the government come spring. The tax bill could affect women's birth control access by undoing key provisions of Obamacare.

I spoke with Amy Friedrich-Karnik, senior policy analyst for the Center for Reproductive Rights, about what the Senate's tax bill could mean for reproductive health care. Between losing contraceptive coverage and maternity care, the outlook for women unable to afford health care could be bleak.

The Senate bill, which passed by a narrow victory early on Dec. 2, included a provision that would remove the individual mandate from the Affordable Care Act (ACA) — the rule that requires individuals who don't receive insurance from their employer to buy it themselves on the market. When the individual mandate disappears, those who can't afford health care (or simply don't want it) will leave the system, sending it into what experts worry will be a destabilized — and skyrocketing — pricing model for those who remain.

As those still on Obamacare face higher premiums, the risk is that they'll get priced out of the system entirely and drop their insurance. As many as 13 million people are expected to lose their coverage in the next decade. That's a huge loss for women especially, who lose their reproductive health care benefits along with it.

For women seeking preventative care, things could get expensive, and quickly.

Friedrich-Karnik cites the ACA's contraceptive coverage as key because it ensured no co-pay coverage for women. Although IUDS, for example, are one of the most effective methods, their upfront costs without insurance — in the neighborhood of $500 to $900 for the device, plus an additional insertion fee of $150 to $250 — puts them out of reach for many women, she points out. Rather than choose the best method of birth control, women might be forced to opt for what's most affordable, and that might not be anything at all.

This body blow to contraceptive access follows another that came in October, when the Department of Health and Human Services under President Trump introduced interim rules undoing the Obamacare contraceptive provision. The change allows some employers to be exempt from providing the mandated contraceptive coverage to their employees on religious or moral grounds. (The public comment period for that change ends Tuesday, Dec. 5, after which the rules will be finalized.)

It's also important to note that birth control is not just for controlling birth. Many women use contraceptives, on their doctor's recommendation, to treat acne or to mitigate painful conditions like endometriosis, among other things. According to Informed Health Online, oral contraceptives and IUDs have proven to be very effective in managing bleeding and cramping.

"One other big threat is to maternal health care," Friedrich-Karnik says, citing the provision in the ACA that ensured care for pregnant women. "As premiums go up, and people aren’t able to even purchase insurance at all, they might lose what they now have, which is guaranteed access to maternity coverage."

"We know that when women don’t have coverage and they're pregnant ... it comes down to buying food for the month and paying out of pocket for health care for maternity coverage, so they often might forego prenatal appointments."

"The bigger picture is that birth control has given women, over decades, as it’s become more accessible and affordable, the autonomy to make the decisions they want to make for their lives," Friedrich-Karnik says, citing careers, education, and family planning as examples of just some of those decisions women are able to make for themselves. "To go backwards to a time when they can’t afford contraceptives … is really just a huge step in the wrong direction."

What about when women do get pregnant and do not abort? For about half of them, care is paid for with — wait for it — public programs like Medicaid.

A provision in the House tax bill passed in November addressed parents opening college savings funds for their unborn children. While not a ban on abortions per se, the provision seeks to codify "fetal personhood," setting the groundwork for determining when life begins. A similar provision would have made it into the Senate bill, but was eventually removed, and Friedrich-Karnik worries such a provision will end up in the final draft.

Now is a critical point for the fate of health care.

GOP leaders from both houses of Congress will be convening in the coming weeks to reconcile the differences between their two bills, and the final bill will need to pass both houses. As we saw with the Dec. 2 vote, entire provisions can be added or dropped at the last minute.

So nothing is promised — yet. But if the Senate bill's ACA provision gets preserved and becomes law, the repercussions for women could be serious.