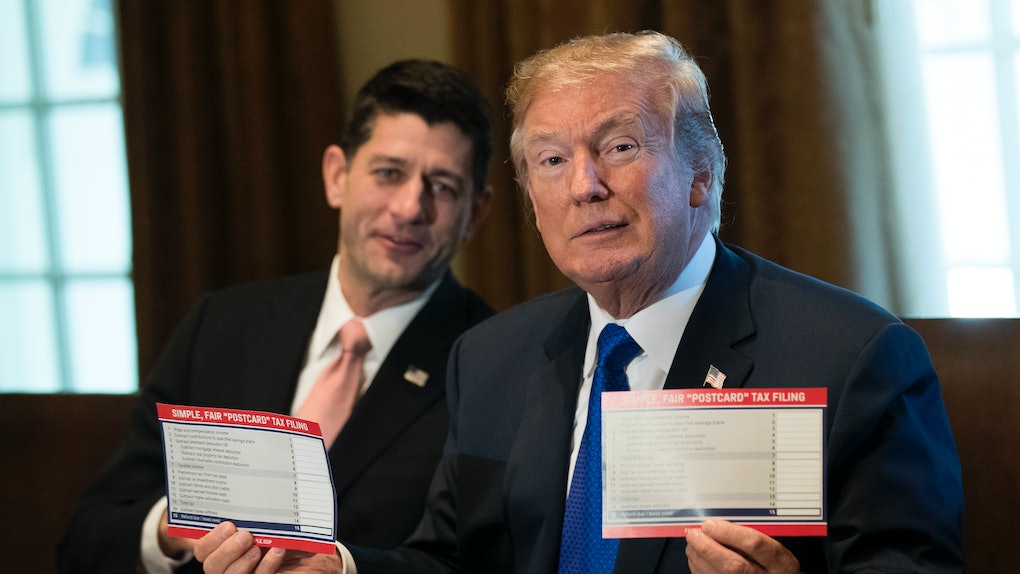 Does The Tax Bill Affect Health Care? Obamacare Is Targeted In The GOP's Bill

As Republicans in the U.S. Senate continue their efforts to pass a sweeping tax reform bill, reports of medical groups' opposition to one potential result of the bill continue to surface. It's no secret why these groups, which usually focus on matters related to health care, oppose the bill, either. It's because the Senate's tax bill aims to affect health care policy in a significant way, specifically by targeting a key component of the Affordable Care Act (aka Obamacare).

That component is known as the individual mandate, which requires uninsured Americans to either buy health coverage or pay a fine on their taxes for not doing so. Two days before the House of Representatives passed its own tax reform bill — which triggers the Senate to do its part and plan a vote on a tax reform bill so that a final bill can eventually be sent to the White House to be signed into law by the president — Republican leaders in the Senate unveiled that their version of tax reform would repeal the individual mandate.

The repeal plan came on Tuesday, Nov. 14. Since then, different medical groups, along with Democratic politicians have had their say on the GOP plan.

What Critics Are Saying

"Repealing the individual mandate would have devastating consequences for millions of working and middle-class Americans and threaten the health and well-being of women who depend on the essential benefits and no-copay birth control provided under the ACA," Nancy Northup, president and CEO of the Center for Reproductive Rights, said in a statement.

"Because Senate Republicans couldn’t repeal the Affordable Care Act, they’re trying to turn this tax bill into a health care bill by repealing the individual mandate," Sen. Kamala Harris (D-CA) said at a Senate Budget Committee on Tuesday, Nov. 28. "So that means if you have health insurance, you could be one of 13 million people to become uninsured in the next decade or face premium increases of up to 10 percent."

The numbers Harris cited are mirrored by an analysis from the Congressional Budget Office (CBO), the non-partisan panel that evaluates the effects of laws that impact the national budget. According to the CBO, repealing the individual mandate would indeed results in the loss of insurance for 13 million Americans and higher premiums that customers would have to pay insurance companies.

The CBO's analysis also projected that some of those millions would be people who don't want insurance, and wouldn't be forced to buy without the mandate. Meanwhile, the repeal is projected by the CBO to save the government around $330 billion over the 10 years. Republicans in Congress have argued that saving this money allows them to offer more tax cuts within their overall tax plan, though the premise is debated.

Harris made her remarks during a Senate Budget Committee hearing on Tuesday, Nov. 28. A vote on the Senate tax bill was first held within the committee of senators, which then puts the bill on the runway to being voted on by all 100 U.S. senators.

On Tuesday, Harris voted against the bill, while all 12 Republicans on the committee — including two Republicans who'd previously expressed doubts about the bill — voted for it.

Why The Individual Mandate Is Such A Big Deal

Repealing the individual mandate would essentially mean ripping the heart out of Obamacare, because much of Obamacare's existence is based upon the mandate itself.

In order to allow more health care plans to be available to everyone — including those who are sick and will inevitably incur more medical bills than healthy people — Obamacare requires (i.e. mandates) everyone to sign up for health care, including young and healthy people. Drawing in people who are young and healthy — and who otherwise might not buy health insurance — was designed to help health insurance companies offset the costs of providing coverage to more at-risk costumers.

Now that the individual mandate could be repealed as a result of Republican tax reform, there are concerns that it would essentially trigger a collapse of Obamacare. Whether Republicans actually include the repeal in their final bill, though, remains to be seen.