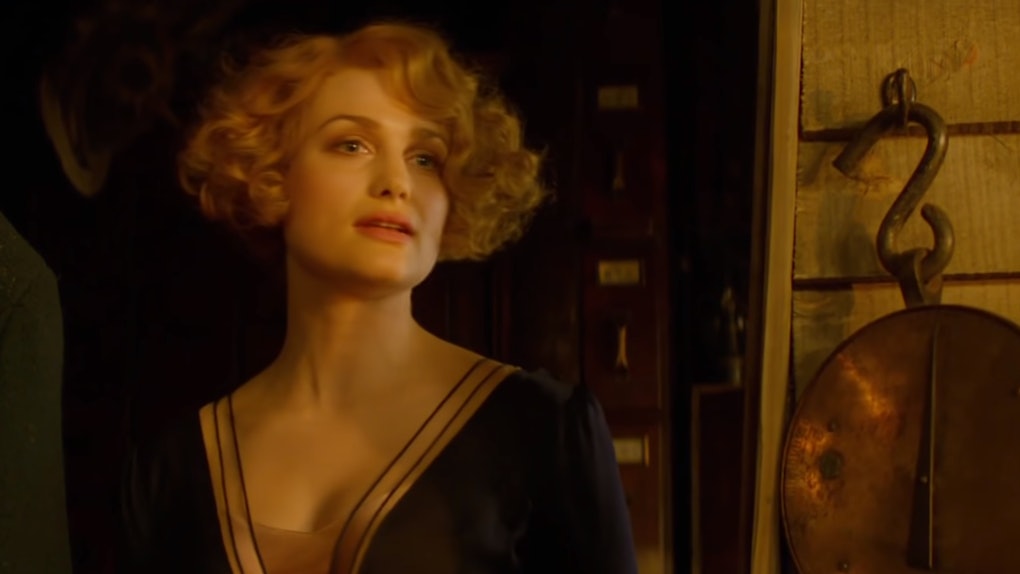 Every Wizarding World movie needs a lovable group of friends to guide us through magical shenanigans, and the Fantastic Beasts franchise is no exception. Newt Scamander may have stumbled into his friendships with No-Maj Jacob Kowalski and the Goldstein sisters, but he's not the only one fortunate for their guidance and support. Fans adore Newt's band of misfits, but in case your memory is a little foggy, who is Queenie Goldstein? The glamorous American witch is due for another appearance in Fantastic Beasts: The Crimes of Grindelwald.

Looking like the poster child for 1920s fashion, Queenie (Alison Sudol) descended upon Fantastic Beasts and Where to Find Them like a breath of fresh air. What Newt (Eddie Redmayne) and Tina (Katherine Waterston) lacked in tranquility, she made up for with her friendly interest in others, and every fast-paced action film needs a bubbly sidekick to lighten the mood. While Queenie initially appeared as a typical beauty queen, the strength of her magical powers established her as a trustworthy, knowledgeable source. Upon Fantastic Beasts' release, Sudol told Pottermore:

Embracing this level of femininity has been a really interesting challenge for me. It really was difficult for me to go, 'Okay, I can be soft and feminine and strong and take care of myself and not lessen myself.' I’ve enjoyed that quite a bit, I’ve enjoyed wearing heels and a dress every day and having these lovely curls and soft fabrics.

If you plan to see Crimes of Grindelwald ASAP, here's what you should remember about Queenie Goldstein:

If you have a sister or two, you'll probably argue until you're blue in the face that you're completely different from them. Such is the case with Queenie and her big sister Tina, a demoted Auror who took Newt under her wing in Fantastic Beasts when his magical creatures scattered across New York City. The sisters live together and both work at the Magical Congress of the United States of America (MACUSA), but it's clear from their first shared scene that Queenie is the sweet, soft one compared to Tina's brasher personality. Of course, the rest of the movie only proves that both Goldstein women are tough cookies in their own unique ways.

As first explained in Harry Potter and the Order of the Phoenix, a Legilimens has the ability to see inside another witch or wizard's mind and gain access to the person's memories and thoughts. By the time of Fantastic Beasts, Queenie learned the downside of her powers, including hearing men's often suggestive first thoughts about her. On the plus side, Queenie's powers have created a strong bond between her and Tina, making her feel safest around her sister. Speaking to Pottermore, Sudol said of Queenie's skills:

It really informs who she is, because she sees into people. She’s not just reading what you’re currently thinking, she’s reading you. Being a Legilimens means she’s reading your whole story, she’s seeing all of your truths. If she peers in far enough, she can go all the way down.

It was nearly love at first sight for Queenie and No-Maj tag-along Jacob Kowalski (Dan Folger). They flirted innocently throughout Fantastic Beasts, but once Credence in Obscurus form was dissolved and Grindelwald was arrested, Aurors had to cast a memory-erasing spell on all of the city's non-magical residents. Jacob's knowledge of Queenie and the rest of the group might have vanished, but Queenie later visited him at his new bakery, prompting a reaction suggesting that some kind of memory still lingers in Jacob's mind.

While the Crimes of Grindelwald trailer basically confirms that these two reunite, there are bigger clues in the Potter fandom pointing toward their happily ever after. A 2014 Daily Prophet article "written" by an adult Ginny and released on Pottermore mentions American Quidditch player Quentin Kowalski. What with the first name resembling Queenie's and the surname being Jacob's, it looks like the pair eventually get married and start a half-blood family. Can we anticipate a wedding in Fantastic Beasts 3?

4. Her School House Was Pukwudgie

Tina and Queenie attended the American wizarding school Ilvermorny, and if you thought the names of the Hogwarts Houses sounded odd upon first exposure, you need to read up on this school's history. While Tina was Sorted into Ilvermorny's Thunderbird House, Queenie was a proud Pukwudgie, which is named after an independent magical creature. According to Pottermore, Pukwudgie students are said to represent the heart of a witch or wizard, and its members also tend to be healers. Soothing Queenie definitely seems to fit that mold.