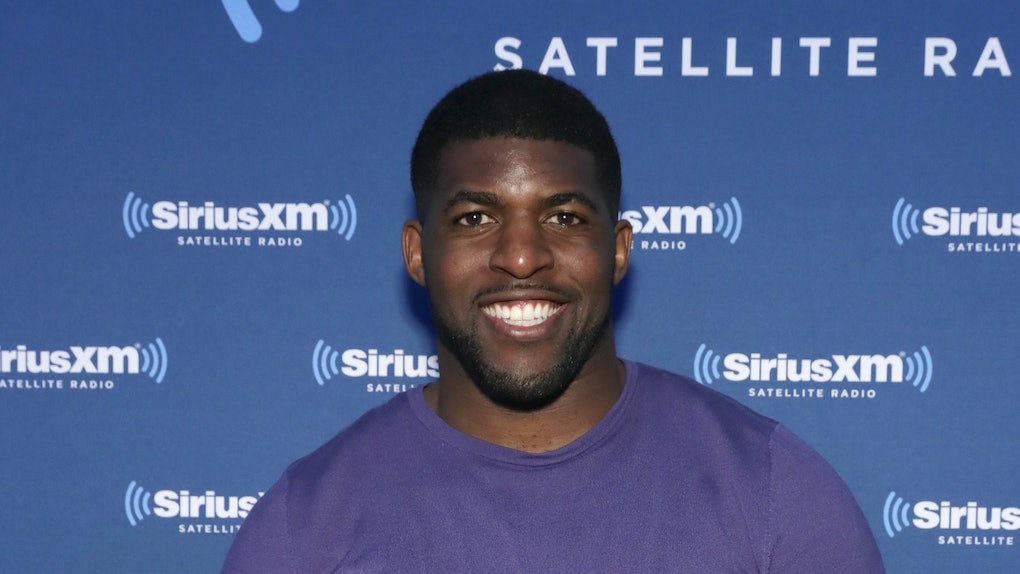 The Bachelor is making some big changes. After longtime host Chris Harrison announced on Feb. 13 that he would be taking a temporary break from the franchise following his comments that "excused historical racism," Bachelor Nation was left wondering who would host Season 25's After the Final Rose special on March 15. Now, ABC has officially found Harrison's replacement, but fans may be wondering: Who is new Bachelor host Emmanuel Acho? He has an impressive resumé.

Harrison stepped aside days after his Feb. 9 appearance on Extra alongside former Bachelorette Rachel Lindsay. He enraged many viewers during the interview, in which he defended current Bachelor contestant Rachael Kirkconnell against claims of racism made toward her (which she later took responsibility for in a Feb. 11 apology). Harrison dismissed many of Lindsay's own points about anti-Blackness in the process, instead blaming 2021's "woke police." A few days after the interview, Harrison announced he would be stepping down from his Bachelor hosting duties for an indeterminate amount of time, beginning with Matt James' After the Final Rose special.

After a few weeks of fans wondering who the new host would be, on Saturday, Feb. 27, ABC confirmed that media personality Acho would be filling in for Harrison at After the Final Rose. Although the 30-year-old has plenty of hosting experience, this is the first time he's appeared in Bachelor Nation before. Before ATFR airs, here's what to know about him.

Acho grew up in Dallas, Texas, as the son of Nigerian immigrants. He later went to college in the Lone Star State, attending and playing football for the University of Texas.

After college, the star was drafted into the NFL in 2012. While he initially joined the Cleveland Browns, Acho was traded to the Philadelphia Eagles in 2013. He was released the same year, then signed with the New York Giants practice squad and eventually re-joined the Eagles in 2015.

Following his NFL career, Acho began working in sports media, getting his start on the Longhorn Network and ESPN. In 2020, he accepted a position as a Fox Sports, where he co-hosts the talk show Speak for Yourself.

4. He has a popular web series.

In early summer 2020, the media personality began hosting a YouTube series called Uncomfortable Conversations with a Black Man in hopes of conducting candid, educational discussions about race and racism in America. Its official description reads: "Emmanuel Acho sits down to have an 'uncomfortable conversation' with white America, in order to educate and inform on racism, system racism, social injustice, rioting, and the hurt African Americans are feeling today."

Since its inception, the series has tackled topics like seeing color, interracial relationships, and national anthem protests.

5. He wrote a best-selling book.

6. He does medical missionary work in Nigeria.

Acho's family has history of medical missionary work in Nigeria, and he has spent time helping the country alongside his family. "I spent the last 10 days in rural villages of #Nigeria, with a group of 41 American Heroes. We provided roughly 2.2 MILLION dollars worth of free medical care," he wrote in a June 2019 Instagram post. "No Black Panther costumes, just scrubs, scalpels, and real lives being saved in Africa."

6. Rachel Lindsay recommended him for the Bachelor gig.

On the Feb. 23 episode of the Bachelor Party podcast, Lindsay explained she thinks it's best for someone with no previous Bachelor Nation ties to host After the Final Rose. She then put forth Acho's name for the gig, noting that Kirkconnell was "reading his book so it kind of all makes perfect sense." Lindsay later told People Magazine that she and husband Bryan Abasolo both think Acho "would be fantastic." She added: "[He's] very outspoken about racial injustice, for social justice, and has pretty much been the person who said, 'I can have these uncomfortable conversations and people trust it.' Who better to lead it?"

Acho will making his Bachelor hosting debut when the After the Final Rose special airs after the Bachelor finale on Monday, March 15, at 10 p.m. ET on ABC.