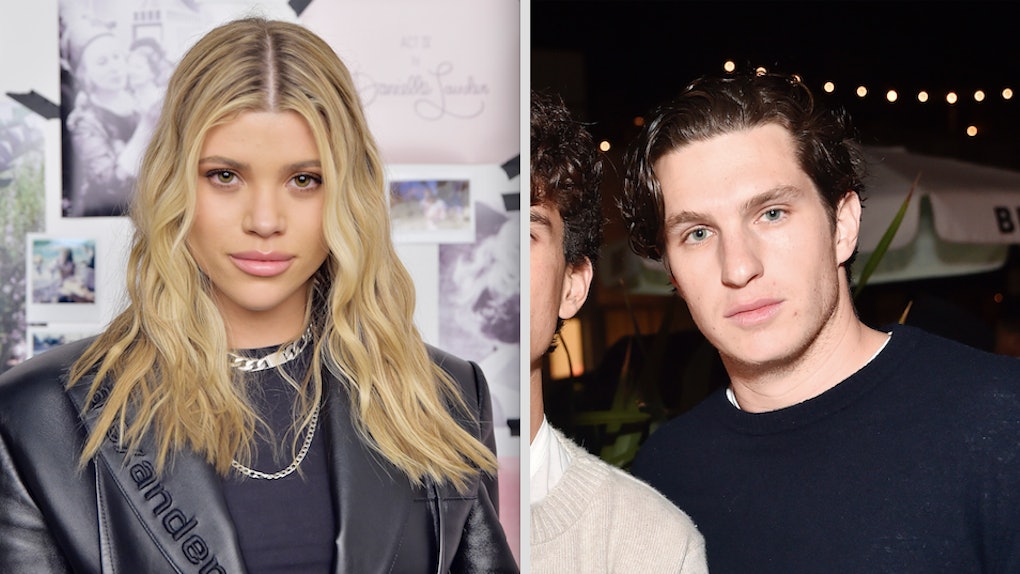 Who Is Matthew Morton? Sofia Richie's Rumored New Flame Is A Big Deal

Now that Sofia Richie and Scott Disick have ended their on-again, off-again relationship of three years, Richie seems to be moving on with her life — but just in time for cuffing season, she seems to have locked down a new boo. Who is Matthew Morton, her new rumored flame? Well, he's a super successful businessman for starters. And lately, it looks like he and Richie are getting pretty darn cozy.

Rumors about this romance first ignited when Richie was spotted with a mystery man, who was later identified as Morton, at Malibu's Nobu on Oct. 17. Just a couple of days after that dinner date made headlines, a source told Us Weekly that the duo is "definitely seeing each other," but also keeping things relatively low-key.

"They’re trying not to make a big deal about their relationship or about how serious it is," the source explained, according to Us Weekly. (Elite Daily previously reached out to reps for Richie and Morton for comment on their rumored relationship and did not hear back.)

According to E! Online, another source says Morton has known both Richie and Disick for a while since they all "run in the same circle," and he and Richie were texting for a few weeks before they finally decided to go out to dinner. The source added that Richie has been trying to "get her mind off her breakup."

"She's having fun and isn't looking for a relationship," E! Online's source said. "She enjoyed her dinner date with him but it's super casual."

Still, the source told E! Online that Richie "thinks he's a really cool guy" and they "have a lot in common."

"He’s ambitious, intelligent and has got his sh*t together," a source revealed to Life & Style on Oct. 19. "Sofia finds him inspiring."

If you're just as intrigued by this new reported flame as I am, here are a few fast facts to know about Morton.

He comes from a long line of food and beverage industry bigwigs.

"Walking with my dad in his restaurants and hotels was always something I enjoyed," Morton told Toolsy. "Being young and seeing all of these big operations as I grew up was really special. It’s always been a dream of mine to have a hotel or restaurant."

He's the co-founder of a mega popular matcha chain.

Seeing as the food and beverage industry is in his blood, it should come as no surprise that Morton decided to carry on the legacy.

In 2015, Morton and his friend Conrad Sandelman co-founded the NYC-based beverage chain Cha Cha Matcha, which is known for its vegan tea drinks and Instagrammable locations. In a February 2020 interview with Toolsy, Morton explained that when he tried matcha for the first time, he was drinking 10 Red Bulls a day (among other unhealthy habits) and he knew needed to make a change.

"My energy levels were always out of sync," he told Toolsy. "No mental clarity and no balance."

After Sandelman brought back some matcha powder from Japan, Morton drank it consistently for an entire month, and discovered it "completely changed" the way he felt.

"Matcha gave me energy, focus, and calmness all at the same time," he added in the interview. "I fell in love with it.

He and Sandelman quickly decided to start their own business to bring the trend to the states.

"Somehow coffee had become this cool trendy thing, but just tea wasn’t,” Morton told Toolsy. “We wanted to change that stigma by building a fun community around a product that promotes mindfulness, mental clarity, focus, and wellness."

BTW, apparently Richie is a big Cha Cha Matcha fan. On Oct. 24, she shared a pic on IG of her beverage from Morton's chain.

He went to NYU.

Right before starting Cha Cha Matcha, Morton attended New York University — where he studied business management. Originally, he was planning on attending the University of Southern California, but he told Toolsy that all it took was two days in New York City to realize he wanted to stay and pursue his studies there. Morton graduates from NYU's Stern School of Business in 2015.

Richie isn't the only woman that connects him to Disick.

It seems like Morton and Disick may have the same "type." On Oct. 15, Disick was photographed on what appeared to be a date with model Megan Blake Irwin outside the Kimpton La Peer Hotel in West Hollywood. This wasn't the first time they were spotted together, either: Disick and Irwin were seen having dinner together in May of 2016 at none other than Nobu. Here's the weird part, though: there were rumors flying around in 2016 that Morton and Irwin were an item after they were seen together several times. (Elite Daily has reached out to reps for both Morton and Irwin about these rumors and did not hear back in time for publication.)

Side note: since they all seem to frequent Nobu, I'm anxiously awaiting an awk run-in between Disick and Irwin, and Richie and Morton. It's only a matter of time, folks.

He was rumored to date Bella Hadid.

Speaking of famous exes, Morton is also rumored to have dated Bella Hadid. A source told Page Six in November of 2015 that they were an item previously, and had started hanging out again after he began attending NYU.

Within the same article, however, another source shut that rumor down by saying that although Matt attended her birthday party in October of that year, that was the only time they'd seen each other in six months.

"They run in the same circles, but there’s no truth to [them hooking up] at all," the source told Page Six. (Elite Daily previously reached out to reps for both Hadid and Morton about their rumored relationship but did not hear back.)

He once came under fire by Cha Cha Matcha employees.

In July of 2020, Morton and Sandelman both found themselves in hot water for how they reportedly treated their staffers. According to Eater, some of the problematic company practices they were accused of including screening employees’ appearances during job interviews; appearing in Instagram photos that employees felt were "culturally appropriative and offensive," and declining to pay employees for their final two weeks of employment in the wake of the coronavirus pandemic (despite shelling out hundreds of thousands of dollars in free merch to celebs in previous months).

"As white owners of a business that employs and serves many people of color, there is no more standing on the sidelines," Morton and Sandelman said in a statement at the time. "As a company, we have a lot to learn."

According to a source who spoke with Life & Style, Morton does have one thing in common with Disick — he "used to party hard."

Still, the source revealed that Morton has left that lifestyle behind him, and other than that, is the "total opposite" of Disick.

"He turned his life around and maintains a healthy lifestyle,” the source explained to the news outlet.

He's also into the arts.

Don't let his business degree fool you — Morton has some creative interests as well.

In his interview with Toolsy, he revealed that not only did he minor in art history, but a part of him wishes he went to school for architecture and design.

"I’ve also always been passionate about art, film, music, and literature," he added.

Wellness is an important part of his life.

It makes sense that Morton — a matcha enthusiast — would be a bit of a health buff. But apparently, he's not just focused on physical health but mental health as well. He told Toolsy that he's always reading, meditating, and exercising to keep his mind and body in tip-top shape.

"I really like reading fiction so I try to read one book for entertainment and another for self-improvement at all times," he explained to Toolsy. "I try to meditate 5-10 minutes in the mornings and at night. I try not to have my phone near me during meetings, and I try to spend at least 20-30 minutes in the middle of the day without my phone. Phones are a constant source of worry and distraction that take you out of the present moment."