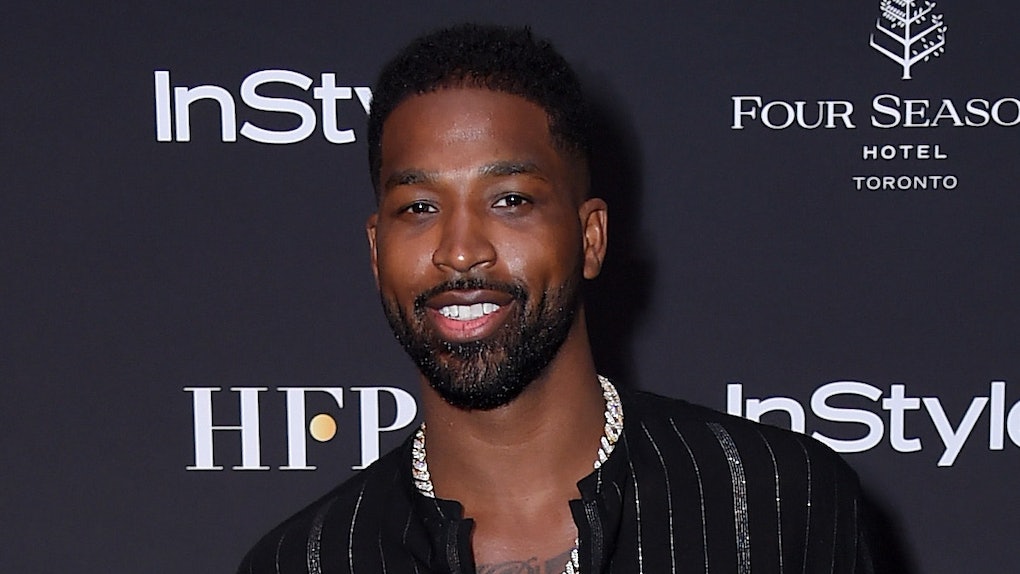 Who Is Karizma Ramirez? Tristan Thompson's New Mystery Friend Has Been Revealed

Tristan Thompson turned heads this week when he was seen hanging out with a new woman twice in New York City, and now the name of said woman has been revealed. Her name is Karizma Ramirez. If you're sitting here wondering, "Who is Karizma Ramirez?" Same! According to reports, she's a model who met Thompson through one of his NBA teammates, Jordan Clarkson. Elite Daily reached out to Thompson's team for comment on the reports and for clarification of the nature of his relationship with Ramirez, but did not hear back by the time of publication.

According to TMZ, Thompson was in NYC last week getting dinner with Ramirez at Carbone, then again this week getting dinner at Nobu — but the outlet reports that both of these dinners were group events. Still, fans couldn't help wondering if something was going on between Thompson and Ramirez following his reported breakup with Khloé Kardashian since Thompson was also photographed bringing two cups of coffee to his hotel room on Tuesday, then later that day was reportedly seen leaving the hotel with Ramirez.

Well, according to a new TMZ report, the two reportedly aren't dating dating, and both times they met up for dinner, Ramirez came as a guest of Thompson's teammate Jordan Clarkson.

Ramirez, according to People, was previously linked to Chris Brown in 2013 and is followed by Blac Chyna on Instagram. Attempts to see Ramirez's Instagram account will be futile, though, as her account is set to private.

Just for reference, it's only been two weeks since Khloé Kardashian reportedly dumped Thompson following the bombshell news that he cheated on her with Jordyn Woods. Elite Daily previously reached out to Kardashian and Thompson's teams for comment on the breakup reports, but did not hear back by the time of publication.

On Tuesday, Feb. 19, TMZ reported that Kardashian had reportedly dumped Thompson after learning the day prior that Thompson and Woods had reportedly hooked up at an after-party at his house that weekend. Elite Daily previously reached out to Thompson and Woods' teams for comment on the reports, but did not hear back by the time of publication. The internet practically imploded over the news, given the fact that Woods is Kylie Jenner's best friend and a longtime friend of the Kardashian-Jenner family. But in an appearance on Jada Pinkett Smith's Red Table Talk, Woods claimed that Thompson only kissed her as she was leaving his house after a night of partying with friends.

I should have gone home after the party. I shouldn’t have even been there ... Never once was I giving him a lap dance, making out with him, sitting all over him. It’s just we’re all together; we’re in a group. Never once did we leave the public area, go to the bedroom, go to the bathroom ... I was drunk. I was not tipsy – I was drunk. But I was not beyond the point of recollection. I know where I was. But on the way out, he did kiss me ... No passion, no nothing.

Kardashian tweeted an angry response to Woods' claims on Red Table Talk, saying she was the reason Kardashian and Thompson's family broke up. She received a lot of backlash over her tweet, with fans calling her out for basically giving Thompson a pass just because he's True's father. Because, girl, that makes it worse!! Kardashian then backtracked, finally placing the blame on Thompson.

This has been an awful week & I know everyone is sick of hearing about it all (as am I). I’m a rollercoaster of emotions & have said things I shouldn’t have. Honestly, Tristan cheating on me & humiliating me, wasn’t such a shock as the first time.

The second tweet that put the blame on Thompson said,

What’s been harder & more painful is being hurt by someone so close to me. Someone whom I love & treat like a little sister. But Jordyn is not to be blamed for the breakup of my family. This was Tristan’s fault.

Now — and please note, I'm only saying this because it's probably the only accurate sports reference I am capable of making — it looks like Thompson is on the rebound.