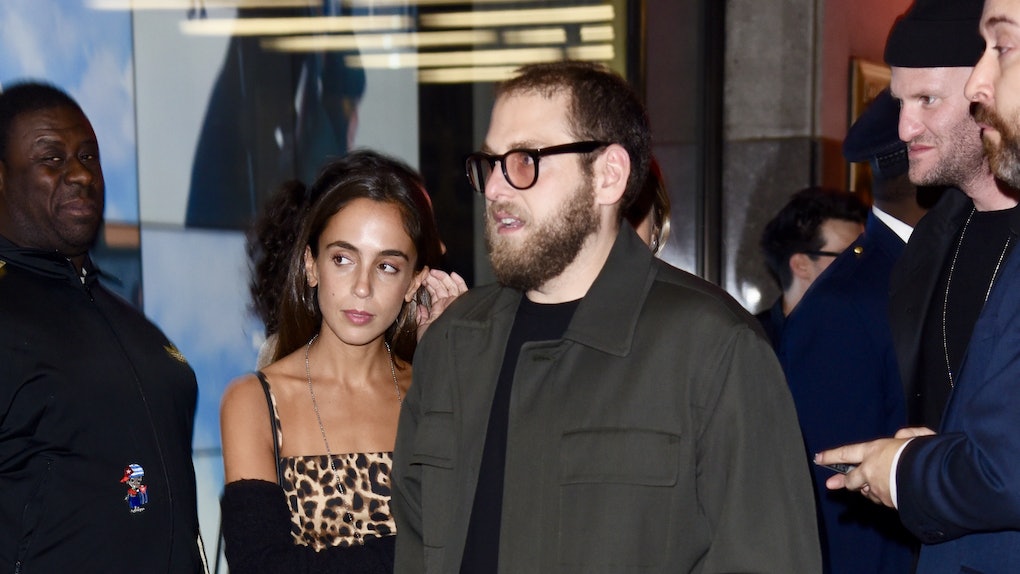 Who Is Gianna Santos? Jonah Hill's Fiancée Is Seriously Impressive

Next to comedian, actor, screenwriter, producer, and inspirational older brother to feminist icon Beanie Feldstein, Jonah Hill can now add another role to his life resume: Fiancé. On Sept. 3, Page Six reported that a representative for Hill reportedly confirmed his engagement to Gianna Santos, his reported girlfriend of one year. The two were first linked together in Aug. 2018 and have kept their reported relationship on the DL ever since. By now, you're probably asking yourself, "Who is Gianna Santos?" Apart from being Hill's reported fiancée, there's actually so much you should know about this fashion and beauty creative. (Spoiler alert: She's cool AF and I want to be her new best friend.)

According to Santos' LinkedIn profile, before working at Violet Grey, she was head stylist and producer at streetwear brand Kith. The label is full of minimalist urban fashion staples — sweatpants, leggings, cropped windbreakers, biker shorts, sports bras — in earthy hues and neutral tones.

Santos was also an e-commerce stylist at menswear site JackThreads and an associate account executive at fashion label Theory. Prior to her time in fashion, she worked in marketing at HBO. Her alma mater is Fordham University, where she graduated in 2011 with a bachelor's degree in communications and media studies.

On her website, you can see Santos' styling chops in Kith photoshoots bursting with texture, shape, and color, especially in Kith's Hailey Baldwin campaign shot at an amusement park. Santos has also put together multiple campaigns for Adidas, Nike, and Puma, including Puma by Rihanna. And last but not least, she worked on the music video for "Sunflower" by Vampire Weekend ft. Steve Lacy, a video that's as '70s as the song is. The director? Hill himself. Can you say power couple?

When it comes to Hill's solo endeavors, 2019 was a busy year. He voiced characters in booth How to Train Your Dragon: The Hidden World and The Lego Movie 2: The Second Part. He also starred in comedy The Beach Bum and executive produced Good Boys, which came out Aug. 16.

While there's no word on wedding dates just yet, it appears Hill and Santos might have already decided where they're settling down. The same day People reportedly confirmed Hill's reported engagement to Santos, Variety reported that Hill recently bought a house in Santa Monica. The dreamy colonial home, framed by floral bushes and palm trees, is 3,102 square feet and cost a smooth $6.77 million.

Wedding, honeymoon, and beyond, it'll be cool to see what this low-key, but intensely and impressively creative couple will be up to next. Until then, I'll be here, patiently awaiting my wedding invitation.

More like this
Is Katie Thurston Engaged After 'The Bachelorette'? Her Instagram Is Sus
By Joyann Jeffrey
Katie Thurston's Ex Joked About Her 'Bachelor' Entrance In His Stand-Up Act
By Corinne Sullivan
Sophie Turner & Joe Jonas' Pics From Their Vegas Wedding Are Such A Vibe
By Cianna Garrison
Stay up to date