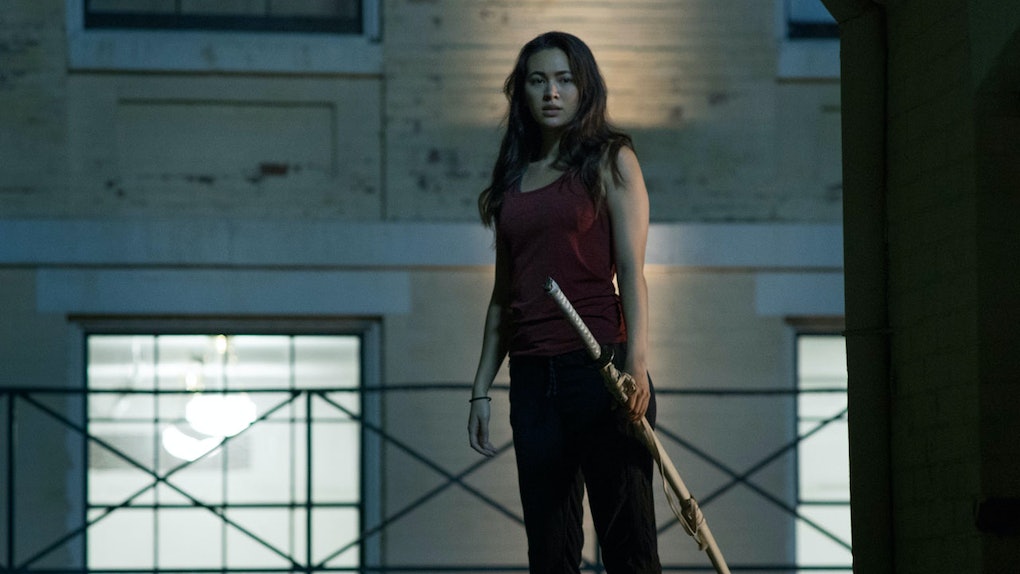 Who Is Colleen On 'Iron Fist'? Here's What Marvel Fans Need To Remember

The best part about Iron Fist Season 1 was Jessica Henwick, who plays Colleen Wing, love interest to Danny Rand and a kick-ass woman in her own right. While Danny was sitting around moping about how no one thought a homeless guy without shoes was secretly a billionaire scion, or no one understood his Iron Fist-y ways, Colleen was out there getting her stuff done every episode, kicking butt and taking names. For those who are having trouble remembering who is Colleen on Iron Fist, here's a rundown on why she's so awesome.

Colleen has a bit of a mysterious past of her own. But unlike Danny who mopes about K'un Lun's fate, or how he fought a dragon once, Colleen isn't going on and on over her parents who disappeared or boasting about how her grandfather trained her. Instead, she's merely confident in her abilities as a martial artist and works hard to teach others while being kind to men in need of shoes.

Colleen doesn't go around boasting about the secret societies she's part of, either. Danny likes to tell everyone about how he was trained by monks. But Colleen's years of being taught by the Hand? Never comes up in conversation.

Oh, by the way, Colleen Wing is a member of the Hand.

But listen! Don't hold it against her. First of all, no one told Colleen the Hand were evil. No one told any of those Hand minions who have been populating Daredevil's supporting roles either, so it's not like she's the first or the last to make a mistake.

And, to be fair, she catches on pretty quickly to the whole "the Hand is actually evil" thing once Danny walks into the picture, and she's suddenly asked to recruit him with the suggestion her survival probably depends on succeeding. Once she sees the destruction of K'un L'un, any beliefs she had about the organization's benevolence are over.

After the events of Iron Fist Season 1, she and Danny wind up moving in together, but it's not all fun, games, and a glowing fist. When the leader of the Hand, Alexandra Reid, makes a move to speed up the plans for New York City in The Defenders, Colleen is right there by Danny's side, fighting along with the people with extraordinary abilities. She winds up meeting Matt Murdock from Daredevil, as well as Jessica Jones, Luke Cage and most importantly, Misty Knight.

Colleen and Misty bond early on in the series. Misty even agreed to give Colleen her katana back because she's going to need a weapon. When the two of them (and Claire Temple) are confronted by Colleen's old Hand mentor Bakuto, Colleen jumps in and kills him, saving the lives of both Misty and Claire, though not before Misty loses her arm.

Colleen makes up for Misty's loss by helping her get a bionic replacement via Rand Enterprises. The two of them made a great team in Luke Cage Season 2 when Colleen visited. Hopefully in Iron Fist Season 2, Misty will return the favor.

More like this
10 Quotes From Netflix's 'Enola Holmes' That Are So Freaking Relevant
By Rachel Varina
'Cobra Kai' Season 4: Netflix Release Date, Cast, Trailer, Plot, & More
By Ani Bundel
What's Leaving Netflix In May 2021? Say Goodbye To Some Faves
By Ani Bundel
Stay up to date