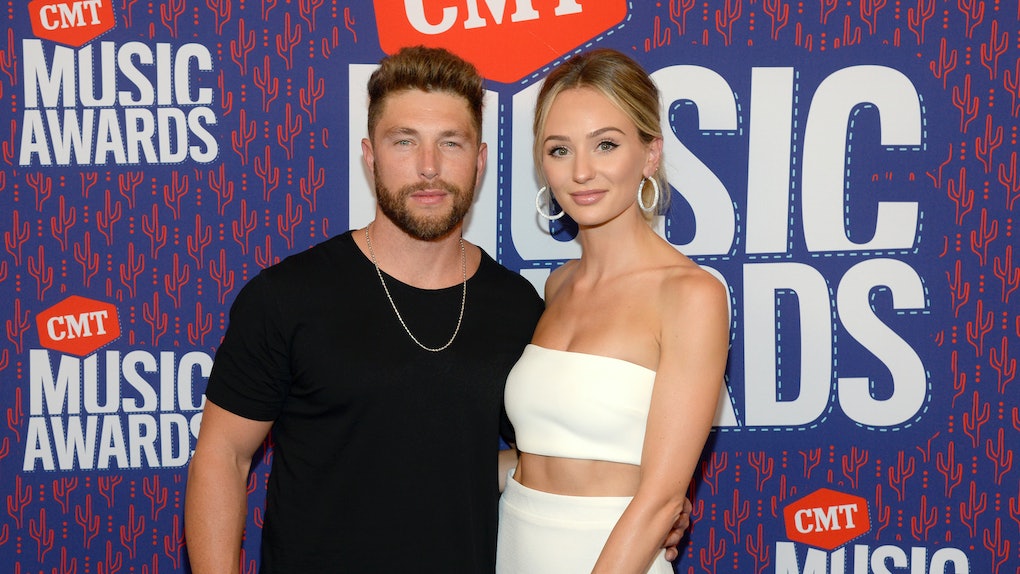 Who Is Chris Lane? Lauren Bushnell's Fiancé Is Popular In His Own Right

In 2016, Bachelor Nation fell in love with Ben Higgins, the Season 20 frontman who initially competed for Kaitlyn Bristowe's heart on The Bachelorette. But we weren't the only ones who fell hard. Lauren Bushnell left with a ring on her finger and Higgins on her arm, and after a year together and a reality TV show, they broke up in May 2017. Now, two years later, Bushnell is engaged, and this time, it looks like it's for real. But who is Chris Lane? Bushnell's fiancé is popular in his own right.

Bushnell announced her engagement on her Instagram page with a super sweet photo of her and the 34-year-old musician, and an even sweeter caption. “I can’t stop smiling,” she wrote. “ I feel so incredibly blessed that every misstep, mistake and heartache has led me to you. I couldn’t be happier to call you mine, forever. The journey was well worth it. Thank you Christopher Eric Lane for softening my heart and making it whole. Never going to stop telling you how much I love you and I will hold onto you forever and ever! Lauren Lane has a nice ring to it.”

Now that Bushnell is happily engaged, let’s dive in and learn all about her fiancé, shall we?

Lane's country music career began in 2012, as the frontman of self-titled band, the Chris Lane Band. Their first album Let's Ride made it onto the Billboard Top Country Albums at the time. His debut solo song, "Broken Windshield View" was released in 2014 and made its way to number 45 on the Billboard Hot Country Songs chart. Two years later, Lane released his first album, which featured popular songs "Fix" and "For Her". (Both total bops, BTW.) His second album, "Laps Around The Sun," was released in August 2018.

2. He's from North Carolina & wanted to be a baseball player.

Originally from Kernersville, North Carolina, Lane grew up playing sports. "Although I loved music growing up, it's not something I really ever thought about other than I just loved singing along to songs on the radio," he told PEOPLE in July 2018. "All I truly knew was playing football and baseball and basketball." When he and his twin brother, Cory, got to college, they both played on the University of North Carolina Charlotte's team. Due to an injury in 2004, he had to have several ACL reconstructions, which ruined his chances of going pro, PEOPLE reported. "I worked really hard to move on at that after college," he said. "My twin brother got drafted. I didn't. As bummed out as I was, I'm really thankful for it now because I would have never picked up a guitar."

3. He has an identical twin brother, and they're super close.

Though Lane's twin was drafted in 2007, PEOPLE reported, he also opted out and ended up going back home to help in the family landscaping business. Before they knew it, the brothers were working side-by-side again, this time in music. Cory plays the drums and performs with Lane at every show. "He never played an instrument growing up, much like me," Lane told the publication. "We both kind of figured it out together. He's been there from the beginning and to watch this thing grow — just to have him out there with me is definitely very special." They look so alike, that fans confuse them for one another often. "I get tagged in hundreds of photos a night saying, 'Just met Chris Lane,' but it’s a picture of [Cory]," he said said. "Even in my hometown."

4. He and Lauren were friends for a few years before they started dating.

Bushnell and Lane reportedly met at an award show in April 2016, when she had just gotten engaged to Ben Higgins after his season of The Bachelor. "We met at an iHeart Radio award show in Austin years ago, gosh it might've been three years ago, and that's when we met initially and kind of just became friends," Bushnell told Hollywood Life in December 2018. "Then I ran into him and some of his friends in Nashville a while ago, and just kind of developed a friendship and obviously now we are more than friends."

When the publication asked when she started seeing him as a possible romantic interest, instead of just a friend, she had a sweet answer. "It was not long ago, only a couple of months ago," she said. "We went on a trip in August as friends, and it just started from there. I was single, and he was single, and it just kind of naturally happened. We were in the Bahamas, but it was a group of friends, it was very low-key."

5. He proposed to her with a song.

For Lane's proposal, he played Bushnell the song he wrong for her, "Big, Big Plans." The lyrics read, "Right now we're back in her hometown / and I'm down on one knee," making the song their reality as since he popped the question at her family's Oregon home on June 16.

“Even though I felt pretty confident I was going to get the ‘yes,’ I’ve never been that nervous,” he says. “When I got to the third verse of the song and knew it was time, I pretty much blacked out. The next thing I knew, she said yes and the nerves just lifted! It’s an explosion of excitement, pure joy, and love.”

“I knew she wouldn’t want some elaborate crazy proposal,” Lane tells PEOPLE. “So, I decided to keep it pretty casual. I asked her parents for different places in Portland I could potentially take her to, but after a lot of thought I decided doing it at the family cookout would be the most laid-back setting and that she’d appreciate the simplicity of me proposing to her in her parents’ backyard.”

He’ll be busy touring with a major country star this summer.

Even though Lane and Bushnell are basking in that just-engaged glow, the singer and soon-to-be husband still has to hit the road. According to PEOPLE, he will be spending a few months on tour with none other than Brad Paisley.

Because of that, Lane told PEOPLE that he was going to leave the majority of the wedding planning up to his lovely bride. "I’ll be there for her with anything she needs help with, but my plan is to tour and stay out of the way!" he told the magazine.

Congrats to Lane and Bushnell! Here’s hoping for plenty more love songs to come from their romance!