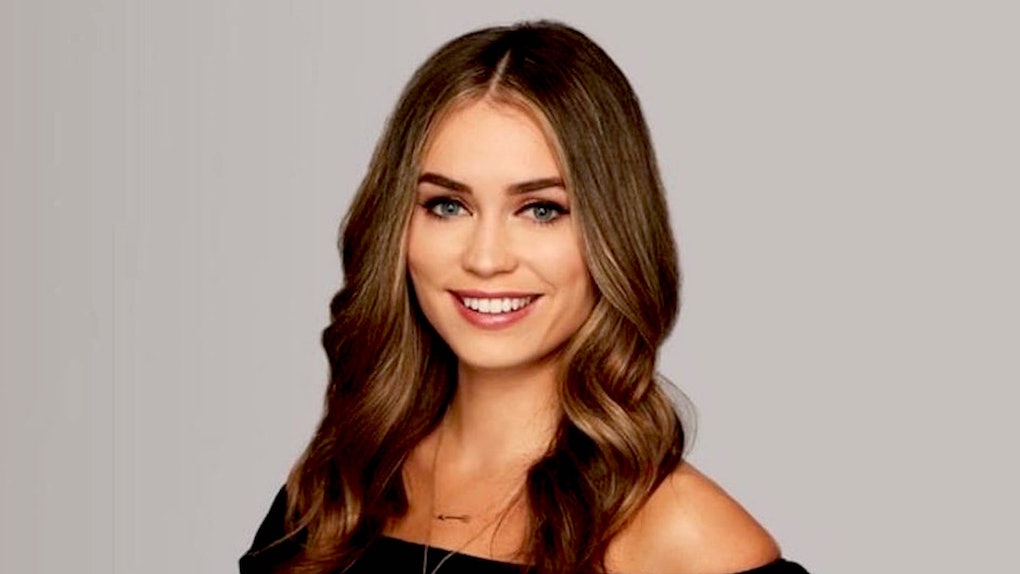 Who Is Caitlin From 'Bachelor In Paradise'? Get To Know The Week 3 Addition

After some truly wild events on the Monday, Aug. 19, episode of Bachelor in Paradise, the first new arrival of Week 3 was unfortunately doomed to walk into a whole mess. That person turned out to Caitlin Clemmens, the realtor from Colton Underwood's season of The Bachelor. If you were watching and found yourself wondering, "who is Caitlin from Bachelor in Paradise?" here is what you should remember about her.

Caitlin Clemmens did not last too long on Colton's season of The Bachelor. She made an eyebrow-raising first impression by arriving with a balloon and popping it, to represent taking Colton's virginity. The realtor made it to Week 3, but Colton wound up sending her home during a group date because he failed to find a strong connection with her.

According to her bio on ABC's website, Caitlin is from Toronto, Ontario, Canada, and enjoys "photography, painting and singing in the shower." Though she didn't stir up the pot too much on Colton's season, she has experienced some drama pre-Paradise. In early 2019, Bachelor Nation bad guy Chad Johnson told Life & Style he and Caitlin were dating, and then he later accused her of cheating. However, Caitlin was not having it: "I tried to remain very respectful while shutting down dating allegations by simply stating that we were not dating and I had no plans to date him. It seems as though that respect is not reciprocated," she told Us Weekly. "In no way did our shared time constitute a committed relationship and that is why I attempted to respectfully shut down those rumors." Yikes.

Considering Caitlin's entrance came immediately after a major fight, a self-elimination, and a really shocking rose ceremony, it seems inevitably she will go on to be involved in even more drama on this season of Bachelor in Paradise. After she arrived, Caitlin chose Dean for a quick sit-down, which worried Caelynn a bit since she had been really feeling the mustachioed Paradise veteran.

But that was far from Caitlin's biggest splash upon her arrival. Dean wound up not going on the date with Caitlin, so instead, Caitlin asked Blake to join her on a date. Yeah, pretty much all of Bachelor Nation cringed at that choice, since Blake has been public enemy No. 1 on the beach, and his partner prospects had been looking pretty bleak.

After the rose ceremony in which his crush Hannah G. gave her rose to Dylan, Blake seemed pretty despondent and said he basically did not know what to do at Paradise anymore — that is, until Caitlin arrived a few moments later and asked him to go on a date with her. Caitlin and Blake did tantric yoga on their date, and to his credit, Blake even filled her in on his sexual and romantic history with the various other contestants on the show. In a twist that should no longer come as a shock to viewers, it turns out Caitlin was also at Stagecoach, the music festival where a ton of Blake's lady drama went down. However, Blake insisted Caitlin was not on his lists of hookups from that weekend, so it seems she won't be sucked into that whole situation... yet.

Caitlin did not seem to have an issue with Blake's past, and against all odds, yet another Blake romance appeared to be set into motion. However, getting close to Blake means Caitlin could enter a whole world of drama, even if she does not know it yet. So Bachelor Nation will just have to wait to see how Hannah G., Kristina, Caelynn, and everyone else wrapped up in Blake's web react to the potential new relationship.