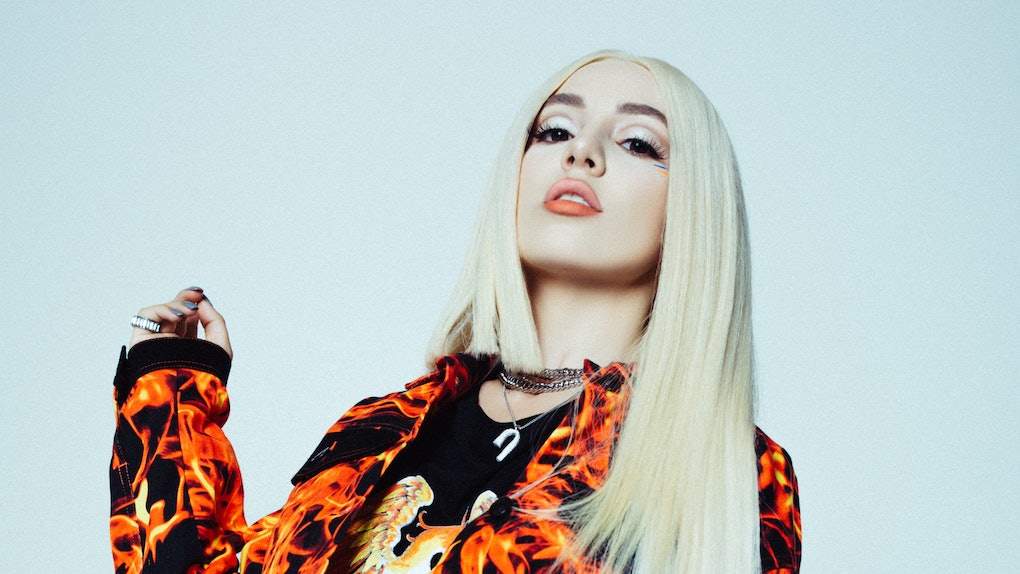 Who Is Ava Max? Here's Everything She Wants You To Know About Her & Her Music – EXCLUSIVE

Ava Max is having a moment. The 25-year-old pop star exploded onto the scene with "Sweet but Psycho" in 2018, and hasn't stopped churning out meaningful bops ever since. On Aug. 19, shortly after she snagged a Best New Artist nomination for the 2019 MTV Video Music Awards, she gifted fans with her new single "Torn," a fun, disco-inspired jam. So who is Ava Max — you know, besides a super-talented musician with a cool, asymmetrical hairstyle? While it may seem like Max was an overnight success, she's been working pretty much her entire life to reach this epic level of rock-stardom.

"To be honest, I thought this day would never come," Max admits to Elite Daily. "Never in my whole life did I think anything would blow up and be as big as 'Sweet but Psycho,' ever. And so I was shocked. I joke around now and say it's been over 10 years of manifesting and it blew up in one summer."

That's right, you guys. Max — whose real name is Amanda Koci — started attending local singing competitions in her Virginia hometown when she was just 6 years old. Her parents were impressed with the way she'd confidently belt out big ballads by Mariah Carey and Celine Dion, she recalls, so when she turned 14, they all packed up and moved to California so Max could pursue her dream.

When she arrived in Los Angeles with her parents and her brother, however, the experience wasn't quite what they'd imagined.

"It was just this lagging, long situation where I couldn’t even get in the studio because everyone thought I was too young," Max explains. "It was not fun at the time for me because I just wanted to sing."

After a year, her family decided to head back east, where Max says she "was just writing songs and basically being a teenager." She eventually returned to California at 17, but it wasn't until she was 21 and met a producer named Cirkut — who's worked with Miley Cyrus, Katy Perry, and Nicki Minaj — that everything started clicking.

"Other producers kept trying to diminish my voice," Max says. "They wanted me to whisper and sing falsetto. Cirkut actually let me sing what I wanted to sing and do what I wanted to do in the studio, and not make me this different artist I didn’t want to be."

The confidence to remain true to herself is something Max says she learned from her Albanian-born parents, who came to the United States without money and didn't speak the language.

"I saw them struggle growing up, and I was like 'OK, if they can move countries with their kids, I can do anything." Hence, "Sweet but Psycho" — a song Max says is about having the guts to speak your mind. "You do what you want and you go for it," she explains. "That's what 'psycho' means to me. So I am definitely psycho."

The popularity of the song changed pretty much everything for Max, who says she had never even been out of the country before. As of summer 2019, she's been to over 30 countries in less than a year. And she's opening for the Jonas Brothers — a turn of events she describes as "surreal," since she had a crush on Joe growing up. Now, she's nominated for a VMA alongside him and his brothers.

"The VMAs are epic," she says. "I’ve watched them every year. So for me to get nominated, without even an album out... I’m just like, 'Why me?'"

The same sentiment could have applied to Max back in middle school, where she remembers feeling pushed down and bullied because she was different. She channeled that feeling into her song "So Am I," which begins with the lyric, "Do you ever feel like a misfit?"

But just like with the word "psycho," Max has claimed ownership of the "misfit" label and turned the meaning on its head.

"It pissed me off growing up feeling like a misfit," she explains. "But it doesn’t anymore. Because misfit to me is a word for being different and liking who you are."

Speaking of which, let's talk about Max's hair for a sec. Believe it or not, the lopsided cut wasn't planned — but it turned out to represent everything the singer stands for.

"I cut my hair like that on accident and I looked in the mirror and I loved it," she says. "I felt like it was me. My gut was like, 'This is it. This is who you are.'"

When she took her new 'do (which she's since dubbed "The Max Cut") out for a spin, the singer remembers getting the weirdest looks.

"That solidified that I should keep it," she says. "Ever since cutting my hair, I’ve felt more confident because it’s who I actually am. So I want the younger generation to know that if no one is doing something, and you want to do it, it's OK to do it and live out who you actually are."

That same message permeates the music video for Max's new single, "Torn," in which she plays a scorned housewife who eventually finds her inner superhero.

"'Torn' is about finding that inner strength and having more courage to do what you think is right and what your gut tells you," she explains.

The video will be dropping on Aug. 27. But in the meantime, check out the official lyric video here.