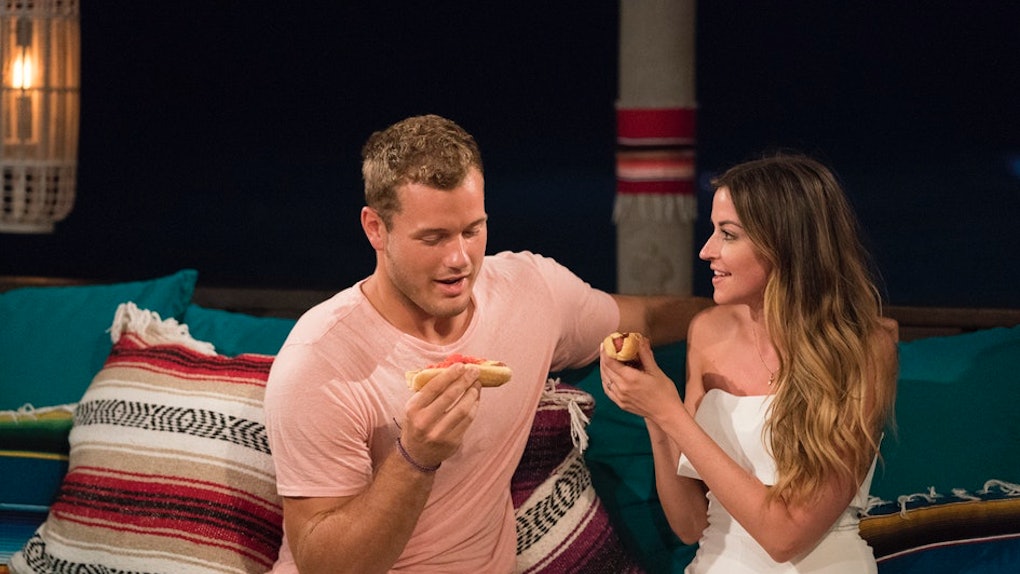 Goodbyes are never easy — but especially not when you have to leave behind a beautiful resort in Mexico, a beloved relationship, and a ton of amazing memories with your friends on the beach. The people who go home on Bachelor in Paradise Week 8 know that better than anyone. During Monday, Sept. 3's episode, Colton Underwood, Tia Booth, TK... left Paradise behind.

Colton and Tia were the first to leave. Early in the episode, during a confessional, Tia insisted that she and Colton were "on the same page." But meanwhile, Colton was apparently experiencing doubts about the strength of their connection. He felt that during his time as a professional football player, he always made decisions that pleased other people — and now, it was time for him to make a decision that honored his own instincts. Despite his belief that Tia is a "great girl," his heart ultimately wasn't in that relationship. During an emotional conversation on the beach, Colton broke up with Tia. They both left the show.

In his last confessional during his drive away from the resort, Colton tearfully told the cameras, "I want someone I can spend the rest of my life with. I really did give it my all. I really did try. This hurts. I'm broken."

Tia got emotional on Twitter. After the split aired, she got honest about what it was like to watch the "bad breakup" appear on national television.

There may be a pretty significant reason that Colton left Paradise that goes far beyond his lackluster connection with Tia. According to Reality Steve, fans should expect the athlete to be announced as the next Bachelor during Good Morning America's Tuesday, Sept. 4 broadcast.

If that's true, Colton positioned himself well to be a positively-received Bachelor; he broke up with Tia in a fairly cordial way, as far as breakups go.

Contestants believed that Week 8's rose ceremony would play out with a serious gender imbalance, since there were 11 women but just seven men. But before long, host Chris Harrison revealed a major shake-up: Jordan Mauger, the star of The Bachelor New Zealand and a contestant on The Bachelor Winter Games, joined BiP. He quickly made the rounds among the unattached women to see if he'd like to give a rose to any of them.

Ultimately, Jordan chose Shushanna Mkrtychyan, and Chelsea Roy, Christen Whitney, and Angela Amezcua were left without roses. What happened next was undeniably intense.

"It sucks. I'm disappointed. I'm sick of being let down," Angela said as she departed from the set.

"I feel like I could throw up right now," Christen said. Later, she added that her ears were ringing, and medics were called to the scene.

"It sucks to be leaving here without love, because I came in here very hopeful," Chelsea said. "I know that I deserve love. Why do I keep failing?" During a confessional, she told producers she was having a panic attack.

Love isn't easy to find, whether you're on Paradise or dating in the real world. Angela, Christen, and Chelsea deserve so much peace and happiness, and hopefully, they find what they're looking for.

Bachelor in Paradise continues on Tuesday, Sept. 4, at 8 p.m. ET on ABC.