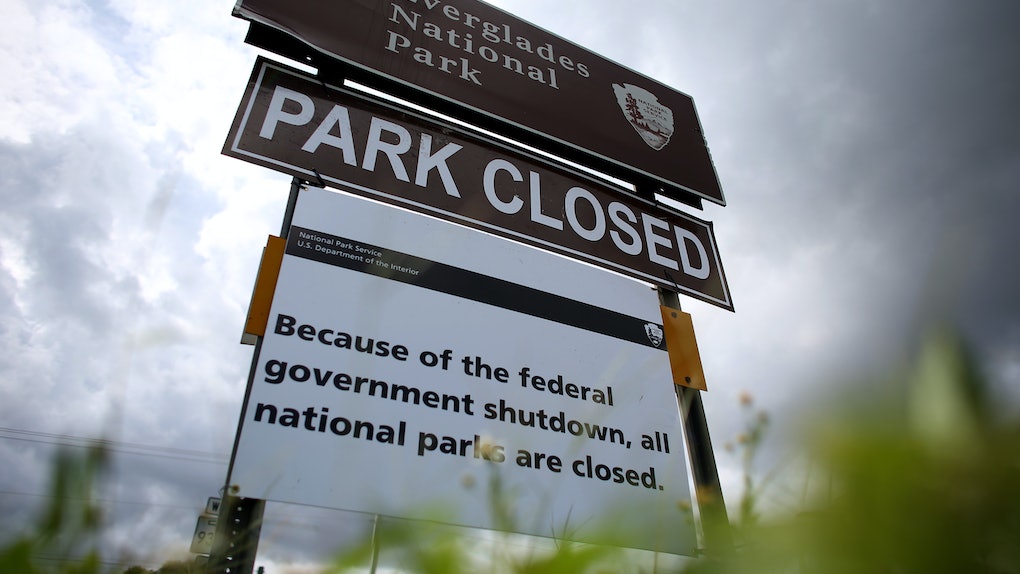 Who Does A Government Shutdown Affect? Well, Almost Everyone

The United States is down to one short day before Congress' temporary funding expires, which could lead to a government shutdown if a new compromise is not reached. Senate Democrats are expected to meet with President Donald Trump at the White House on Thursday, Dec. 7, as a last effort to talk negotiations on a temporary spending bill. If a compromise is reached tomorrow, Friday, Dec. 8, it will be another normal day, but if not, a government shutdown can nearly affect everyone. Here's what could happen.

First of all, a shutdown would affect federal workers.

Roughly 800,000 employees could be forced into unpaid furlough days for as long as the government shutdown lasts. Almost all NASA employees could be furloughed as well. The last time this happened was October 2013, and it cost the U.S. economy roughly $20 billion for the 16 days it lasted, according to Moody's Analytics. At the time, former President Barack Obama's Affordable Care Act (Obamacare) was being debated in the Senate. An estimated 400,000 federal employees were furloughed, and another 1.2 million federal employees were paid late during the shutdown period. The economy greatly suffered from loss of national park tourism, hotel bookings, and delayed real estate deals.

Each government shutdown (there have been 18 since 1976) is different from the next. This is because each shutdown can be longer or shorter than the previous one, affecting the government and its workers differently.

If you're a veteran, your benefits may be at risk.

If a shutdown occurred, veterans' benefits are at risk for delay or reduction, as the Board of Veteran Appeals halts all decision-making during that time. The Department of Veteran Affairs, however, will continue with most services and programs that are vital for veterans.

If you were planning a visit to a national park, museum, or anywhere internationally, you may want to reschedule.

In the case of a shutdown, national parks, zoos, museums and many passport offices shut down. People who are waiting on passports, or are planning to get them soon, may have to wait awhile. During the 1996 government shutdown, the State Department halted the processing of applications, and thousands were affected. Even if you do have a passport, you still may want to hold off on travel plans. Air travel and furloughed TSA workers can be affected by a shutdown, increasing security time and airport traffic. Depending on how long the shutdown last, Amtrak rail services could be affected and greatly reduced, considering the private company relies on government subsidies.

If you're a small business owner or homeowner, you could be affected as well.

During a shutdown, the Small Business Administration (SBA) and the Federal Housing Administration (FHA) may delay or stop new loan applications. On top of that, IRS tax processing may slow down, causing mortgage applications to take longer as the bank waits to verify your tax return.

During the 2013 shutdown, the Women, Infants and Children (WIC) Program, which provides food to low-income mothers, children, and pregnant mothers, ran out of state funds.

Things that will remain open are U.S. mail services, Homeland Security, overseas embassies and consulates, food stamps, the U.S. military, and federal courts. However, if a shutdown lasts longer than 10 days, some courts may furlough nonessential employees, according to The Guardian.

Even if you don't fall into any of these categories, the United States will collectively be affected by a shutdown, considering how significant of an economic cost it will be. If Congress is unable to find a solution to a temporary spending bill by Friday, everything from travel plans to tax returns could be impacted, so it's better to be prepared for the worst.