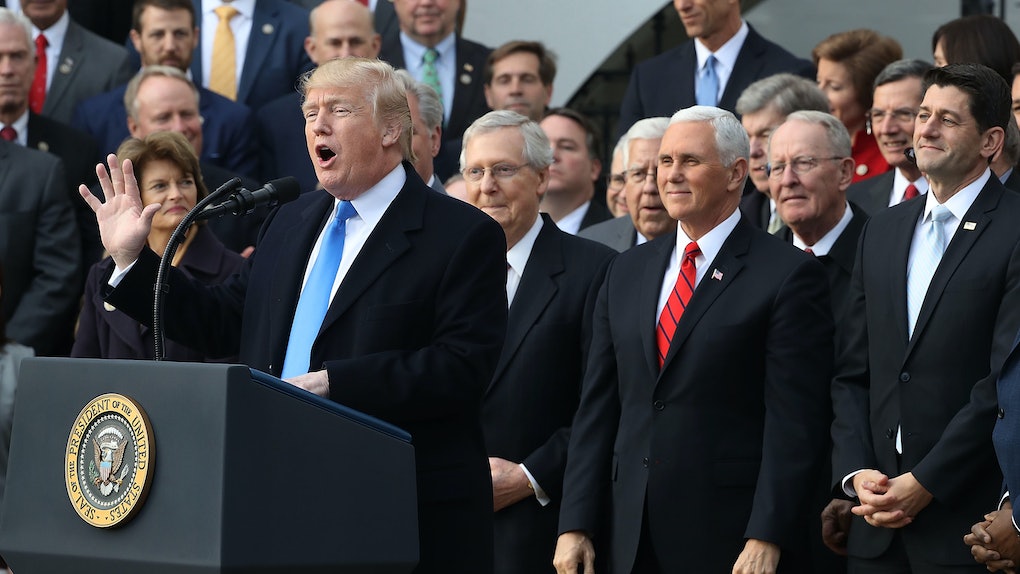 Which States Have It Worst Under The New Tax Bill? Good Luck If You Live Here

Just in time for the holidays, Republicans have passed a massive tax bill which will reportedly cut taxes by $1 trillion and add $1.5 trillion to the deficit. And despite the fact that President Donald Trump is likely not going to sign the bill into law until Jan. 3, 2018, this overhaul is happening. Which leaves us wondering how it'll affect everyday Americans. And since taxes are already so different from state to state, it begs the question of which states have it worst under the new tax bill? The impact of the tax bill varies from state to state, but there is a pattern emerging: low- and middle-income earners — especially those in blue-leaning coastal states, like New Jersey and Maryland — will be hit hardest by the tax bill.

This bill is so complex (despite promises to simplify the U.S. tax code), that there's no hard and fast rule for who will suffer the most, but there is a pattern of coastal states that vote blue seeing the biggest tax increases in the middle class. Further, some of the provisions, like the state and local tax (SALT) deduction limit and the mortgage deduction cap, will disproportionately hit blue states. A report by the Tax Foundation found that the states hit hardest will be high-tax states that had voted for Hillary Clinton in the 2016 presidential election, including California, New York, New Jersey, Minnesota, and Oregon, according to Reuters.

But that doesn't mean that only blue states are affected — deep-red states such as Alabama and Mississippi will also be hit hard in 2027, after the tax cuts expire.

We took a look at how both low-income and middle-income earners will be affected in various states in both 2019 and when individual cuts expire in 2027, and the results are not pretty.

2019: The first year of filing under the new tax code puts more money in most Americans' pockets — but there's a catch.

From state to state, a pattern starts to emerge when looking at the tax bill's immediate effects: low- and middle-income earners in blue states — not the wealthy — are going to carry the tax burden for the next few years. Provisions like limiting SALT deductions (the ability to deduct state and local taxes), will disproportionately affect blue states, which, according to The Washington Post, use SALT deductions far more than red states.

As soon as 2019, most low- and middle-income earners will see tax cuts, but they will be negligible at best. According to NPR, individuals who make, for example, $20k-30k, will see an average tax cut of $180. Individuals making $50k-75k would see something like $870 more in their pockets.

And when you break down the tax bill state by state, large portions of middle-income earners will see tax increases, according to CNBC. (While your paychecks will reflect the new code in 2018 — possibly as soon as February — you'll file under the new code for the first time in 2019.) Accounting for the varying costs of living state to state, CNBC determined what percentage of the middle class, state-by-state, will see tax decreases and tax hikes. And it's not too good for those blue states.

And while those numbers are a fraction of the number of earners who will receive initial tax cuts (again, many of which are negligible), the real damage of this tax bill emerges as early as 2027, when individual tax cuts will expire.

Unless Congress acts and reauthorizes these tax cuts when they expire in 2025 — which are temporary for individuals and families but permanent for corporations — large portions of low- and middle-income earners are looking at tax increases. And, once again, many of these earners reside in blue states.

And, given Congress's recent inability to reauthorize the wildly popular Children's Health Insurance Program (CHIP), things are not looking good for 2025.

So here's what we're looking at in a matter of years for blue states (again, per CNBC):

And there is a similar pattern in other blue states, like Maryland, where 35 percent of middle earners and 22 percent of low-income earners will see tax hikes by 2027.

Meanwhile top earners in many states (including Maryland, New York, and New Jersey) will actually see tax cuts. In fact, 100 percent of the top 1 percent of earners in the state of New York — who take home at least $1.14 million per year — will see their taxes cut by 2027.

But it's not just coastal blue states that will hurt.

In Alabama, for example, 39 percent of middle earners will see tax increases in 2027 (up from 6 percent in 2019). But it's not just middle-income earners in red states that will hurt: 35 percent of the poorest earners in Alabama will see a tax increase in 2027, up from 6 percent in 2019. The same pattern follows in Louisiana, Mississippi, Georgia, and more.

This is all despite promises by Republicans that the bill would help the middle class and low earners. But the numbers aren't proving that point. No matter what a cheering group of Republicans says.