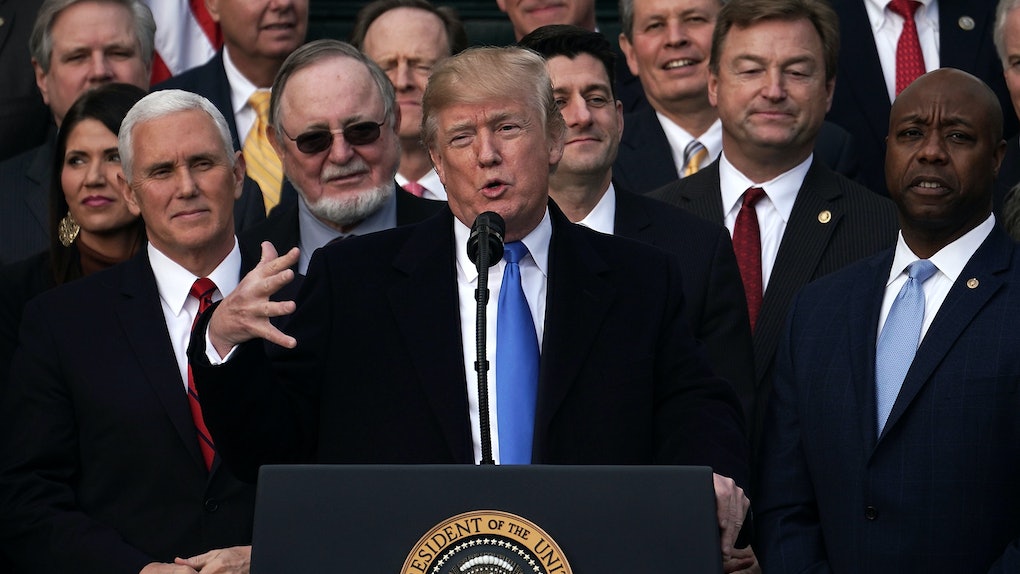 Will The Tax Bill Affect 2017 Taxes? Some Changes Are Immediate, Others Are Not

Now that Republicans in Washington D.C. have put all doubt to rest, passing a massive tax reform bill through Congress, questions about the bill's effects are no longer a matter of if... but when. More specifically, when will the tax bill affect your 2017 taxes, and how you file them? While the tax bill will result in some changes that come faster than others, one thing is for certain.

In the new year, the GOP tax bill will not affect how you file your tax return for the year 2017. Instead, you'll see a difference in how your taxes are filed in early 2019 (which is when most people will be filling out their tax returns for 2018). The reason why is obvious: The taxes Americans were charged during 2017 where incurred according to a tax code that is different from the one that the Republican tax bill will usher in.

So, no, your next tax returns (again, the returns that most people will be filing between January and April in the coming new year) won't be dramatically changed by the GOP's tax bill.

What that means for 2018 is clear. There's still an individual mandate (which issues a penalty to those who don't have health insurance). The standard deduction won't be doubled until you file for your 2018 returns (in 2019). You'll still be able to deduct charitable donations and you'll still be able to deduct the amount you pay in state and local taxes from your federal taxable income.

However, just because the tax bill won't affect your next tax return doesn't mean there won't be immediate changes. One of the more significant changes that is soon to come relates to the amount of money taken out of each of your paychecks. The Internal Revenue Service (IRS) has already said that it will be changing the guidelines that determine that amount at the start of the new year.

"The IRS is continuing to closely monitor the pending legislation in Congress, and we are taking the initial steps to prepare guidance on withholding for 2018," a Dec. 13 statement on the IRS' website reads. "‎We anticipate issuing the initial withholding guidance (Notice 1036) in January reflecting the new legislation, which would allow taxpayers to begin seeing the benefits of the change as early as February."

In other words, you should notice a difference between how much money is taken from each paycheck around February. Such an outcome will be consistent with what Trump said about the tax bill and its immediate effects on the same day the IRS released its statement. "I’m excited to announce if Congress sends me a bill before Christmas, the IRS — this is just out, this is breaking news — has just confirmed that Americans will see lower taxes beginning in February. Just two short months from now" the president said during a press conference at the White House.

As for other immediate changes, a few major companies have already announced that they are using the passage of the GOP tax bill as an incentive to invest in their employees. One of those companies is AT&T.

"Once tax reform is signed into law, AT&T plans to invest an additional $1 billion in the United States in 2018 and pay a special $1,000 bonus to more than 200,000 AT&T U.S. employees — all union-represented, non-management and front-line managers," a statement from the telecommunication company reads. "If the President signs the bill before Christmas, employees will receive the bonus over the holidays."

In the long run, though, the impact people see on the their 2018 tax return — which will be affected by the GOP tax bill — will be more telling than the isolated examples of certain companies handing out bonuses. And that tax return won't come until 2019, when Americans file returns for the 2018 tax year.

More like this
These Tweets About The Bidens' Photo With The Carters Ask A LOT Of Questions
By Rhyma Castillo
Shelly Bell Is Making Sure Black & Brown Women Entrepreneurs Get What They're Worth
By Fatma Khaled
32 New Job Instagram Captions, So You Can Have Fun Announcing Your Next Adventure
By Rachel Chapman
Stay up to date